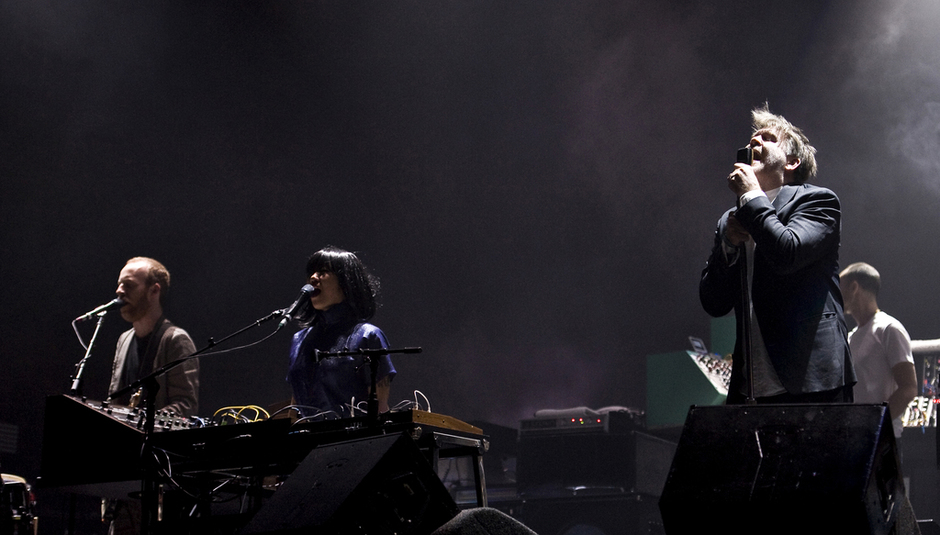 The roads leading up to the Parc El Forum in Barcelona are lined with men dangling cans from six-pack rings, asking wrist-band wearing passers by, 'Cerveza? Cervezabeer? Cerveza?' There’s a rumour going around that these cans are stored in the sewers beneath Barcelona’s streets and we recoil in horror as if we aren’t about to walk into a festival where we’ll put who knows what into our systems. The Forum site is huge and you have to walk up a slight incline to get to the entrance; these sewer beers are only meant to see us across an ocean of concrete before we’re stopped and searched to get into the site. It doesn’t matter what time you arrive or what time you leave the Forum, these guys are there, carrier bags dripping with melting ice, asking, 'Cervezabeer? Agua? Cerveza?' And if you look the type, they’ll say, 'Cerveza? Cerveza? ...Something else?'

The giant carpark that the core festival takes place on is overrun with people who’ve tried their hardest to look like they haven’t tried at all; all recently trimmed hair and pristine band t-shirts. You could carpet the moon (conservative estimate) with the tote bags in attendance. We ease into pre-festival gigs on the Wednesday night but no one is paying all that much attention to Goat’s culturally questionable party tunes because the sound system isn’t loud enough and we’re all giddy at finding our friends in the crowd and being in Barcelona. The promise of fun to come hangs over us as Suede take the stage, Brett Anderson with his shirt hanging open asking the crowd back for a coffee and whatever while we battle our way to the bars, to the merch stands, to the exit, to McDonald’s, to our Airbnbs, to town.

Thursday’s group Whatsapps are riddled with the words ‘beach’, ‘tapas’, ‘wristband’ and ‘strike’ because there are strikes on the Metro and even Citymapper isn’t clear about whether or not they affect us. Even Citymapper. We have to ask people. Our Spanish is not good but it’s ok because their English is. The site, have I mentioned this, is huge. The main stages are a 20-minute ordeal away from the smaller stages and a giant solar panel covers a mammoth staircase in the middle that seems like a bad idea considering thousands of people are about to get out of their mind drunk and whatever else.

Cass McCombs becomes shorthand for things we want to see but don’t have the wherewithal to find because he plays about 16 sets over the weekend and we manage to miss them all. We’re not hugely bothered about Car Seat Headrest but they’re pretty good it turns out. They’re pretty good or the hot patch of concrete we sit on as the sun dies behind the stage is pretty good, or it’s a combination of both; either way, we agree that the experience was pretty good. There’s a lot of pretty good going on at Primavera; it’s not always easy to tell what’s causing it. The night becomes a tapas spread of bands we fancy a bit of but not a lot of; Suuns play our favourites as soon as we walk up to the stage, bone-shaking bass and screeching guitar moving us before we move on to the next dish; Vince Staples daddy-longlegs his way around the stage, his torso staying still while his legs jacknife up and he urges us to bounce with him. We do, for a time, a haze of pungent smoke rising above the crowd before we’re peckish for something else - is it Jessy Lanza? It might be but we can’t tell because the sound bleed from Floating Points is so bad on the shitty little stage she’s on. Is it Floating Points? No, it’s not, although we appreciate their light show. Everything here is tied up in your mood; if you’re not feeling it, you move on.

The consensus is that we should get a spot for LCD Soundsystem even though there’s an hour to go before their set. The crowds are already huge. We were flagging but now we’re happy, we’re ready. We find our friends, we find an Argentinian who lives in Madrid and ends up talking at us for what feels like weeks before we shake him off and go into the crowd, and we lose people and we find them again, everyone’s hyped, everyone’s happy, everyone’s dropping and drinking and some people are flagging and some people are sick and some people are fine and some people are not and everyone wants water but only two of us have water and we share it around the crowd, even people we don’t know because we’re all brothers here, we’re all family now. Then LCD come on and suddenly we all feel 10/10 amazing. We are dancing and hugging and crying and grinning and there are glow sticks raining down on us and we all want a glow stick SO bad but once we get a glow stick we don’t know what to do with it so we put them in our hair and our pockets and our bags and they glow quietly from inside the canvas. We dance ourselves clean while the band gleefully try to fool us with every song intro; they never do. “I can’t fool you guys”, James Murphy concedes after singing the opening to 'New York' etc. in a variety of different rhythms and styles. We somehow match him on every one. The frantic piano chords that signal 'All My Friends' start so we grasp each other and sway like it’s one minute past midnight on New Year’s Day and shout “THIS IS SO GOOD”. It was. It was so good. We don’t want it to end but it does and we turn and we trudge, trying to keep track of each other, trying to make it to the toilets, to the bar, to the next stage.

The entire festival’s energy seems low as we cruise into Friday, having some more musical tapas before someone panics and says we should get a spot for Radiohead despite there being a full two hours before they’re due on. It turns out to be a good call; getting a spot early is always a good call. The crowd is more intense than LCD’s as Beirut yawn on about Santa Fe behind us. Eventually Thom and co shimmy on to the stage, his ghostly wail keeping things downbeat for the first few songs before launching into hits. It’s a bit quiet, we say to each other, don’t you think it’s a bit quiet? The stars over the Heinekin Stage twinkle with the exact intensity of 'No Surprises'. Everyone’s favourite seems to get played, even 'Creep' can you believe it - can you believe it? - we can only just about believe it.

Everything seems to go wrong after Radiohead. A phone gets lost as we battle against the trickle of people actually willingly going to see The Last Shadow Puppets. An argument breaks out, the noodles are bad, we’ve lost half the group and we are sick of being in crowds but there is no escape from the crowds. We just have to embrace it and get lost in Kiasmos’ sparse Icelandic techno where we make the mistake of standing behind a bin - why are we standing behind this bin? - and move on to The Avalanches who, it turns out, are only doing a DJ set anyway. We’re tired, so tired, we can’t face a bus and taxis are few and far between so we walk and walk and walk, singing and talking and being quiet through Barcelona’s tiled streets before we find a taxi willing to take us.

By Sunday, we’re used to it. Primavera is life. This is how we live now. We walk and walk and sit and watch and listen and dance and move on and back and Brian Wilson is an absolute dream. Well, Brian Wilson isn’t - he’s as tired as we are and tries his best but he can’t wait for it to be over. We don’t want it to be over, we’re back in the game, jiving and twisting and hugging our way through the hits in the early evening sun. Obviously the only way to follow Pet Sounds is with Pusha T and the whitest crowd he has ever played to. We approximate arm movements and fun fingers as he raps to us about dealing crack. It’s big and fun and over too soon and we’re too hyped up for PJ Harvey so we stay and dance to Chairlift, right at the back, enjoying having space in front of us instead of arms and shoulders and hair and backpacks. The joy of dancing heightened by the slightly frantic feeling that it’s the final day and we should be packing in as much fun as possible.

Then we’re lost in a haze of music and fun and drinks and dancing and trudging and trying to find each other in crowds; Parquet Courts are raucous and we leave for Moderat who are - finally - loud enough for us. And suddenly it is 6.30am on Sunday and we’re feeling emotional as DJ Coco is ends his party set with '"Heroes"'. As we exit the site for the last time, warm from dancing and the early morning sun, the men on the street look as weary as we feel. Still they shake their sewer beers at us and ask, 'Cerveza? Cerveza? Something else?'