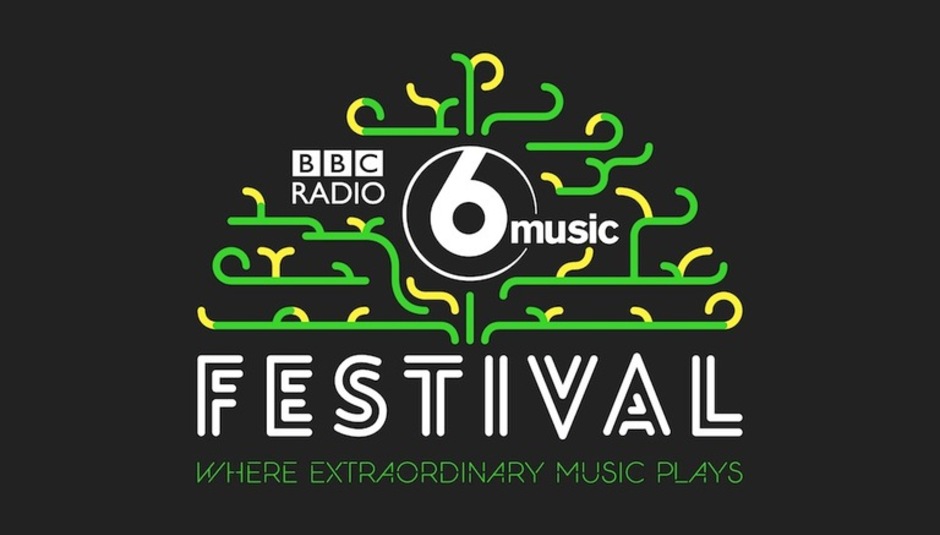 Last weekend saw the inaugural 6 Music Festival roll into Manchester, setting up residence for two evenings of music at the city’s Victoria Warehouse – which will be well known to many as the venue for The Warehouse Project over the past few years. With the aforementioned Warehouse Project alongside events such as Parklife and this summer’s forthcoming Castlefield Summer in the City event, Manchester is increasingly proving itself more than capable of taking on major events outside of the Capital, and despite a few grumbles typical of new events and considering the limitations of the venue, this year’s event was for the most part, a profoundly enjoyable and memorable event with some truly excellent performances.

Flash back to Friday and there’s initial difficulties getting into the venue with my media wristband, but such issues are quickly solved and it’s Stockton-based Weird Shapes who open the festival. It’s never an easy job opening an event but Weird Shapes look completely at home with the busying crowd in Room 2. Combining a love of dreamy, watercolour landscape sound-collages with a genuine understanding of pop hooks, they are utterly together as musicians with a pristine degree of ability. The response to their set’s conclusion suggests that the door may be opening for them to proceed swiftly to the higher levels. A real triumph.

We investigate the outside area with stalls and food courts (with speakers from the main stage relaying Luke Sital-Singh’s sweet, enjoyable but seldom truly-engaging set from inside the main venue) before heading back inside to reluctantly engage with the high drinks prices (one of the low points for the event - £4.50 a beer is much easier to cope with if you’re receiving a 500ml large bottle rather than a 330ml but hey ho!) and get a decent spot for HAIM. Who are something of a mixed bag. Their record is an engaging one but live, and in a hall barely two-thirds full, they struggle to gain much traction during their set, to the point that their frustration starts to come out that the crowd “aren’t clapping much”. Less their fault, they seem to be suffering from sound issues which render Danielle’s guitar and Alana’s vocals inaudible at points. That said, they stick to their guns through the set and the closing duo of the excellent ‘The Wire’ and ‘Let Me Go’ are greeted with a belated wave of enthusiasm, but it seemed something of a swing-and-a-miss for the Californians today.

Kelis, on the other hand, is quite magnificent. Dressed in a slinky gold dress and with a full brass band in tow, she and her band are absolutely on form as they take us through a collection of her greatest hits and tracks from the upcoming (exceptional) album Food. Bookended (and met in the middle!) by snippets of Nina Simone’s ‘Feeling Good’ it comes off as an expertly worked medley and she’s such an engaging stage presence that the party starts erupting the minute she comes on stage. ‘Trick Me’ rolls along with a near-perfect groove, ‘Milkshake’ still thrills as a modern classic and ‘Jerk Ribs’ sounds like a contemporary one. A genuine survivor, a genuine talent and as good as anything we see all day.

The limitations of Victoria Warehouse then arise. Heading across to Metronomy, we come across a huge (and quite scary) bottleneck of people heading to Room 2 to watch them. The thought then arises that putting a band of Metronomy’s stature (remember, they’re headlining the 20,000 capacity Field Day) on the second stage, at the time that people are getting a bit more merry and ready for dancing is a huge mistake, given that they’re up against Midlake in the main room. After several fraught minutes of pushing, squashing and waiting, a sign goes up to inform us that Room 2 is closed and we’re turned around, which involves another few minutes of pushing, squashing and waiting. Eventually we make it back to Midlake who do an admirable job of entertaining the Metronomy-less new arrivals. Much more engaging, dynamic and expressive than previously, they look as if they’re growing into their new stature, and a pleasing and unexpected John Grant guest appearance combined with an excellent closing duo of ‘Roscoe’ and ‘The Old and the Young’ leaves them the unexpected victors of the unusual sub-headliner stage schedules. Genuinely impressed.

In the midst of everything, it’s almost forgotten by many we speak to that tonight’s Damon Albarn appearance is actually pretty much his debut solo outing with his current material. Not that you’d have known it – his band are exceptional. Intelligent enough to play around the subtleties of his new material but capable of stepping on the accelerator when needed, they’re a hugely impressive group of musicians. Damon, as always, is in fine voice and is typically gentlemanly in his effusive thanks to the crowd. Though for the first half of the gig, things are threatening to wobble out front. Clearly many have arrived expecting multiple Blur hits and when the only “recognisable” track that appears is a dub-heavy Gorillaz ‘Tomorrow Comes Today’, there’s a wave of mutterings and conversations that threaten to derail the performance. In true Damon style however, the second half wins the doubters around. There’s a savvy throwing of a bone in the form of ‘All Your Life’, a Blur B-Side from 1997’s ‘Beetlebum’ but aside for that and a trio of other low-profile Gorillaz and The Good, the Bad and the Queen songs (including a glorious 'On Melancholy Hill'), this is all about Damon’s new material tonight. And it is beautiful and immediate – tender, mysterious, heavy-hung and bittersweet; yet also welcoming, intelligent and profound. By the end, the battle is won with time to spare and the final set of up-tempo, driving tracks mean that not for the first time, any potential doubters are won through by Damon’s new material. One of Britain’s finest musical talents may just be about to write himself a glorious new chapter. This material has much to offer.

Having criticised some of the arrangements for Friday’s event, it’s only fair to say that the organisation for Saturday is much, much improved. The bottlenecks are less, there is more space at the bar and the whole atmosphere has much more bonhomie. Kicking off in Room 2 are PINS who are typically taut, wired, to the point and inscrutable as they play a no-filler 30 minute set of knife-edge post-punk. It seems to be slow-but-steady going for PINS making headway but given that they’ve just announced a US tour and with the rapturous reception they receive tonight, it seems as if this most-excellent and underrated of bands are slowly getting to where their considerable talent deserves.

Jagwar Ma put on one of 2013’s best shows in opening up the John Peel Tent at Glastonbury, but for some reason, tonight just doesn’t click. They seem to be hyping up the rave vibes a little too much rather than exploring some of their nuances but in doing it, they seem to be “just another rave psychedelia” band rather than the excellent and intelligent band that previous shows and albums has shown them to be. Lykke Li however, who follows them, it quite excellent – that beautiful, unique and strident voice ringing out across shimmering beats and sparse, atmospheric sounds. The fact that she gathers a significant crowd opposite Jake Bugg is testament to the people of Manchester, and I thank them for it. As for Bugg, all I’ll say (based on one song) is that his band are quite excellent musicians, but fail to lift the standard of his increasingly bland songwriting.

There’s then a quite horrible clash between Franz Ferdinand and Wild Beasts, whereupon I head to the main room for the former, based upon having seen Wild Beasts ten times in the past two years, and having not seen Franz since 2008. The last time I saw Franz Ferdinand – a band I’ve always loved since 2003 – they looked tired, uninterested and in need of a good rest. Few could see them surviving another five years but on the back of last year’s Right Thoughts, Right Words, Right Actions, they have seemingly been re-energised.

Tonight is an absolute masterclass in hit-and-run, greatest hits, "leave 'em wanting more" piece of indie-rock brilliance. As good as I’ve seen them for a decade, they simply sweep through the hits an with absolute gusto; appearing excited, passionate and full of that leery art-school dancefloor charm that made them so popular back in 2004. As a band I’ve had to continually defend to doubters over the years, it is quite wonderful to see an entire room so fully behind tonight’s set and you can’t help wonder whether this is a true second dawn for them. ‘Take Me Out’ still ranks with the best British singles of the past 20 years, ‘The Fallen’ remains an underrated masterpiece, ‘Michael’ is white-hot and the likes of ‘Fresh Strawberries’ and ‘Love Illumination’ sit perfectly alongside the older matierial. They close with a swaggering, triumphant ‘Ulysses’, the crowd go absolutely insane and I’m left astounded – glad in the choice I made to go and see them. A show I never expected to see again, Franz Ferdinand are back with aplomb. Spectacular.

And so to The National, who may typify the kind of band who 6 Music have championed over the past few years and are therefore a fitting headliner to close the weekend's festivities. Accordingly, he main room is absolutely packed out and the subsequent arrival of (an increasingly-bearded) Matt Berninger on stage is met with deafening cheers, prior to them diving straight into ‘Don’t Swallow the Cap’. Unlike the Manchester Apollo show back in November, they seem to have fully harnessed the Trouble Will Find Me tracks now and a pleading ‘I Should Live in Salt’ sounds something of a stadium anthem now. But it’s on ‘Bloodbuzz Ohio’ that something remarkable and spine-tingling happens. As the gathering storm begins to rise on the “I still owe money...” section, the entire crowd finds throat and sings each word back to Berninger, in perfect time. As the words "I'm on a bloodbuzz" explode, the crowd responds as if a blast-wave was heading through the room from front to back. For someone who has seen this band play to so many half-empty small rooms, it is a quite extraordinary thing to see, and a validation of where this band are in 2014.

For the rest of tonight, this is simply a home-win banker – a lap of honour. ‘Afraid of Everyone’ resonates to the rafters, ‘Abel’ explodes with unhinged fury and ‘Graceless’ continues to push itself up into the upper echelons of their songwriting pantheon. But it’s the encore that truly captures the heart. They tear into ‘Mr November’ like men possessed, before a tumultuous, stirring ‘Terrible Love’ and then finally; heartbreakingly, they amass on stage – unplugged and unshielded – for a closing, acoustic ‘Vanderlyle Crybaby Geeks’. It’s near-perfect as a set and yet another of those great National shows that keep stacking up with every year. The 6 Music Festival may have brought a new and welcome event to Manchester, but it was hearts, minds and hands from Brooklyn who helped to carry the whole event home in triumph tonight. I’ve said it before and I’m sure I’ll say it again – one of the finest acts in the world today.

"The people of Louisville are crazy":...