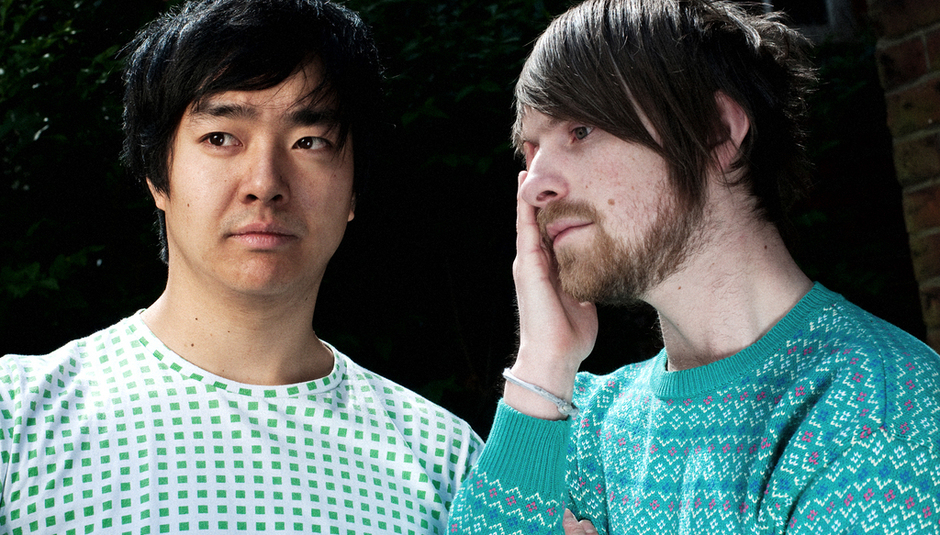 This week, we have another tie, because I have gone equally silly in the head over both Maps and Fuck Buttons. Really – honestly - the rest of this week’s releases can go hang. It is sort of like being at a party with loads of ace faces but the only ones what exist for me are Maps & Fuck Buttons. So I am going to keep them all to myself in the kitchen and shan't let any of the other records have any punch.

Single Of The Week! (Number One!)

If you’ll allow me to be bossy for just a second, I’d like you to lift your eyes towards that four letter abomination after Fuck Button’s single title. Do you see? It says ‘edit’, everyone, and in this case, it means shaving off SEVEN AND A HALF MINUTES from the original version. Now, far be it from me to invoke Muso Law, but this is wrongness on a grand, grand scale. Because ‘Surf Solar’ is magnificent for at least nine - possibly nine and a half - of its original ten and a half minutes. And it’s a building, morphing, throbbing thing – all lovely, ratcheting old skool house dartiness - a modern take on the sounds you'd hear when yoots would wear All White to nightclubs. And everyone thought peace and purity could be achieved via the mass use of illegal mind-shonkers. (A great time, one imagines; shame it didn’t quite work out).

I am not one of those irritating girls what madly goes around BELLOWING at the TOP OF MY VOICE about how much I LIKE SEX, ME in case any boys happen to be listening. I really do promise, despite what follows. Because my best analogy for the four minute cut-down of ‘Surf Solar’ is that it is the vulgar quickie, old-one-two shag to the original version’s slow fuck proper. There’s no foreplay, no teasings-out, no wide-eyed backdrops being whitewashed in readiness for the big daubs of bleached noise. Which for me, at least, makes it kind of pointless. Because this is a journey of a record, a slow melt - it earns the right to take four minutes stroking your aural bits before it sticks the dirty-acid-found-in-a-back-alley down your neck. Obviously you are free to ignore my gross TMI-ing, but do make sure you buy the longer version - it's wondrous.

Single Of The Week! (Number Two! Although I Should Say! This Is In No Particular Order! Because Both are Brills!)

To bastardize a line from Steel Magnolias (what I re-watched in dropped-jaw awe this week), I would rather have 10 seconds of wonderful than a whole song of nothing special. And the keyboard run on ‘I Dream of Crystal’ at 02:10 - the bit where the song bursts over the horizon and blinds you in its hazy, electronic rays - is nothing short of extraordinary. It’s the rainbow shining after all was dark, on a place where things were threatening to become ever darker. So while James begins his story telling us that he can ‘handle just about anything’ and calls upon his aggressors to ‘Do what you like to me’, he then comes over all Considine-in-Dead-Man’s-Shoes. Threatening to ‘…hit you...hard as I can’ he then seems to relent ('But that's not really the plan') and instead of violence, uses the swelling music as a weapon, as if he's drowning his foes in musical treacle; suffocating them with his rich synths. Bear with me while I wildly extrapolate - but it really does feel as if Chapman has found a way to use positive, beatific noise to illuminate foul corners and bat away the badness - by making a record so dense, NOTHING can fight its way through. His very own Wall of Sound! And not only is this an intriguing notion (man wards off the black dogs with synth sunrises) it also happens to sound uncommonly beautiful for we who listen. Now, I don’t want to wish the poor chap ill (and it does sound as if he’s seen things we wouldn’t believe) but someone once said that from the darkness comes the light. And when that light sounds like Maps - as you can tell - I get very, very giddy.

The Crookes are seven agoraphobic school children from Rhyl who play recorders and like wordsearches themed around marsupials. Sorry, but the thing is, I done gone lost the press release. Whomever they are, and from wherever they may hail, the important thing is that they happen to have made a lovely b-side, what is called 'By The Seine'. At first I thought they were singing 'scene' - because they pronounce it that way. And naturally that was all rather irk-making, because 'scenes' are always, always dreadful. But that being quite enough lax and lazy journalism for one week, I will get on with the curious business of musical description. Which is where I explain how 'By The Seine' sounds like Dog On Wheels as channelled by Beirut circa 'The Penalty'. And very beau it is too.

Utterly charming, naïve skank-pop, ‘Low Fly Tropical’ is a swaying palm tree of a single. But on the proviso that the palm tree is to be found in a Parisian boîte, where a cute sixth form girl-choir with rad hairslides have taken to the stage. It’s all amiably DIY, perkily recorded, and has a glorious Clash cover on the b-side. Lovely, lovely stuff.

Enormously well-timed release from the girl of the moment. Who will - if there’s any justice (‘There isn’t' – The Industry) - be around for a long while to come. On much brighter form than on ‘Better Days’, ‘Spinnin’’ sees Debelle whip out her hookiest and most optimistic skillz - with one thing in particular sticking out like a sore post-Mercurys head. It’s that pretty muted trumpet, and it's very nearly as natural and appealing as Corynne herself.

One of the best things about avoiding the album ‘experience’ (as I mostly do), and concentrating just on singles, is that I can choose to ignore The Canon. I can forget about indie Sindys, I can merrily avoid kisses with fists and wait until the good stuff comes along, and when I love that entirely in isolation. Whether 'M.A.D.' constitutes 'good stuff' I cannot tell you. All I know is that for some reason my sensible side has put up its white flag and now the twits are running riot. Believe me, Hadouken! have reached unforeheard levels of berkishness on 'M.A.D.' and yet, AND YET - it has given me great pleasure. I’m a bit afeared for myself if I'm honest - and I don’t expect you to respect me for it; I do in fact command you to de-friend me immediately. Behold the garbage pail wrongness of the artwork! Witness the thieved Trigger Happy japery of the video! It’s a comedy record! From a novelty band! Who sound like a Prodigy tribute act! Except - you know - for kids!

In order to justify myself, Let's Pretend for a moment. It's just that when I think about which sort of band would be most fun to be in, I see Hadouken! grinning inanely and beckoning me to join them for some tinnies. I mean, it is all very well thinking you would like to be in a band like Wild Beasts, or Arcade Fire, or Friendly Fires, or Fleet frickin Foxes. You know, SERIOUS INDIE. But honestly readers, would it not honestly be more larks to play the sort of records SPECIFICALLY DESIGNED to be MASSIVELY OFFENSIVE when ASBO TEENS play them OUT LOUD on MOBILE PHONEZ on the bus? Sod lolling about trying to be clever and shoe-horning references to Balzac/Camus/Fante into your lyrics. I want to do MEATHEAD SYNTHS - and I'm completely serious, before you ask.

It’s not got the same barreling urgency as a record like ‘Fools’ – but let’s face it, not many do. They are another of those bands who do their best work – and make most sense - in a live setting. Not least with all that makeshift drum-kitted noise, all dustbin lids and beaming sweaty faces. I love it when two little people can make that much big, rousing noise – although it’s worth pointing out that ‘Fables’ is rather a soft affair. All that said, there are some harmonies on the chorus that make your heart skip like a girl who has just located the hopscotch chalk.

The Cinematics - ‘New Mexico’ (The Orchard)

Eagles cover from the duo with the horrible lady-leg keyboards.

Wendy is on Twitter, here. Come and say toodle-oo.

Back on the Maps: James Chapman write...