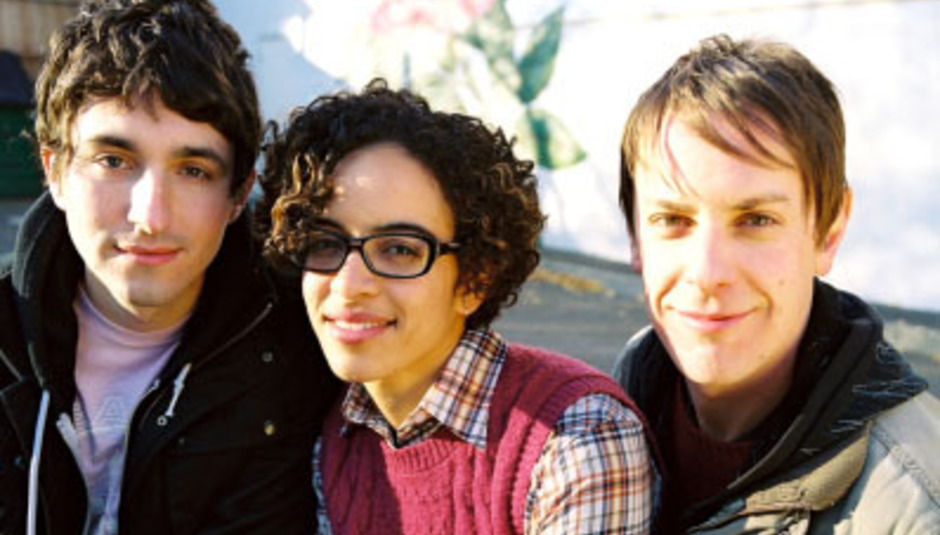 Pop-rock doesn’t come much more perfect than from the strings, sticks and throats of Portland, Oregon trio The Thermals. And that formula is further streamlined on latest LP Now We Can See (DiS review), released last month. It’s their debut for new label Kill Rock Stars, after splitting with Sub Pop following previous zeitgeist-riding record The Body The Blood The Machine.

DiS spoke to bassist/vocalist Kathy Foster, also drummer on Now We Can See prior to new sticksman Westin Glass’s appointment, about the album’s death theme, celeb fan Johnny Marr and how The Thermals officially now have more than one song...

DiS: Now We Can See seems a hopeful title. How tangible is the hope in America entering the Obama era, as opposed to the fascist Christian state predictions of The Body The Blood The Machine?

Kathy Foster: It’s kind of a coincidence because we wrote all those songs before Obama was running for president. It comes across quite hopeful but most of the songs are quite cynical. The song ‘Now We Can See’ is like ‘Now we can see all the mistakes we’ve been making on this planet but are we going to do anything about it?’ A lot of the songs are about human arrogance and realising that.

DiS: There are definite overtones of death throughout the album. Was that based on particular personal experiences during its writing/recording?

KF: No. We kind of picked up where the last album left off, this apocalyptic end of humanity, ending the album in a bed of noise, writing songs from the perspective of someone who’s died looking back on their life, reflecting, thinking about all of humanity. Both of us [Kathy and guitarist/vocalist Hutch Harris] were thinking about death a lot, it was a prevalent subject.

DiS: So songs like the possible diary of an alcoholic, ‘Liquid In, Liquid Out’, weren’t autobiographical, then?

KF: No. I mean Hutch goes between drinking a lot and not drinking a lot, but he’s by no means an alcoholic! We were joking around about how life is just a series of beverages: wake up, drink coffee, drink water, drink juice, drink alcohol.

Video: The Thermals: 'Now We Can See'

KF: We basically wanted a different contract to the one Sub Pop were offering. We made three records with them and they gave us another contract for two more, but it looked the same as the first contact. We wanted some different things – we wanted to license the album instead of having the label own the masters – so we thought about it for a long time and decided to not continue with them. We decided to make the record without a label then after we were done, or close to done, we started talking to labels, sending them songs. Kill Rock Stars was the first label that started talking to us. They moved to Portland last summer so we met them a couple of times and liked everything they had to say, how they do business and all their ideas for the record. We talked to a bunch of other really awesome indie labels, like Merge and Saddle Creek, but we really liked Kill Rock Stars, having grown up with a lot of the stuff they put out, and really liked that they were in Portland.

DiS: The band has gone through a fair few drummers. Will the core of the band always be yourself and Hutch?

KF: Yeah, I think Hutch and I will definitely play music together for a long time. We’re playing with Westin Glass now. We really like him, we all get along and we’d love to have him stay in the band. Everyone we’ve played with is also really creative in a lot of other ways, making furniture, films, art. Touring a lot playing the same music over and over can be monotonous for some people. And when you’re touring you don’t really have time to be creative in other ways. That was kind of what happened with the previous drummer. But Westin seems super excited and he’s up for anything, so hopefully he’ll be around for a long time.

DiS: A few cheeky messageboard critics have suggested The Thermals ostensibly only have one song template. Will Now We Can See finally prove the doubters wrong?

KF: Definitely. The songs are more dynamic on this record. Obviously to me they sound different, but each album has grown more dynamic in succession. The first record was just Hutch playing everything on a four-track. He wanted to make a bunch of songs like that: quick and catchy. We formed the band around those songs, so with each album the songwriting has grown deeper and more developed. So this album definitely has a variety of different songs and tempos.

DiS: You’ve toured multiple times in the UK with The Cribs. Are they your best British mates?

KF: Yeah. Gary [Jarman, Cribs bassist/vocalist] lives in Portland, he bought a house in Portland and just married Joanna [Bolme] from The Jicks, Steve Malkmus’s band. I really like their songs and it’s awesome to watch them play and watch their crowd. They have so much energy and everyone’s so excited to see them.

DiS: It must be an honour that Johnny Marr has declared he’s a Thermals fan? Were you a big Smiths fan back in the day?

KF: For sure, I was totally excited. We met him a couple of times in Portland, he has a house here too, but the first night we saw The Cribs play with Johnny it was so awesome. He’s the coolest guy. He was so friendly, so nice and such a good guitar player, so it was really fun being on tour with him. He kept asking us for a copy of our new record and we didn’t have any blank CDs. He kept asking every day like ‘Are you being evasive?’ It was like ‘Oh my God, Johnny Marr wants our record!’ His kids came to a couple of shows, they’re like 16/17, and were really into The Thermals too. They were really sweet.

The Thermals tour the UK in June, full details TBA.