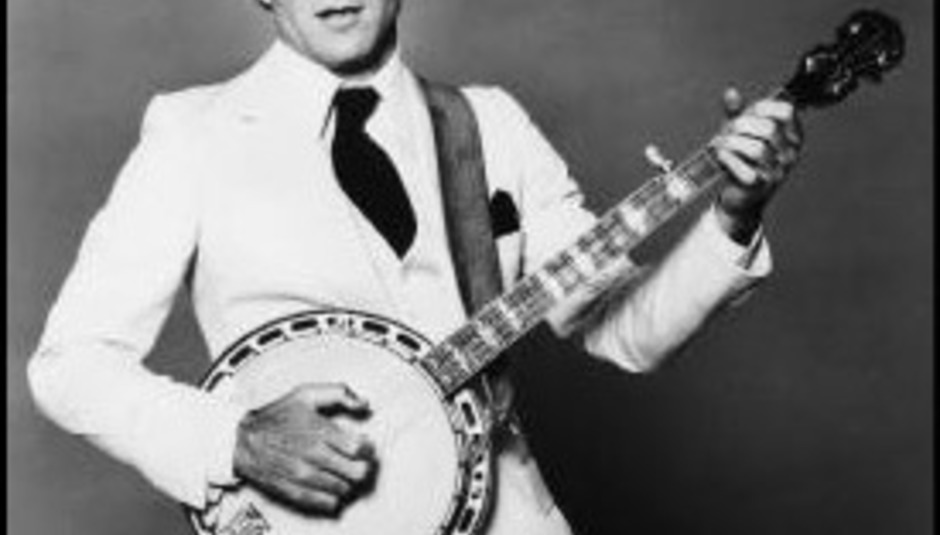 On the last day of my DiS takeover, I wanted to cover something that wasn't music. Sure music is fine in a pleasantish sort of way. Sure it fills the silences and heightens the emotions, can make a grown man cry and a girl feel like a woman or whatever, but sometimes you just got to wonder what those other sections in the iTunes store are for.

Enter Lightspeed Champion: Dev Hynes is one of those people who has given up hours of his life adding information to Wikipedia. He knows everything to know about rap feuds, and is passionately vocal about the hierarchy of comic book film adaptations. He recently dressed as the Gingerbread Man to attend an Anime conference, and he will cry real tears if you tell him you enjoyed X-men 3.

I asked him for a little wedge of his specialist knowledge, and he came back with two words: Steve Martin. Apparently he's been obsessed with him from a very young age, for the very valid reason of Steve Martin being a certified genius. You may sneer a little at recent decisions like Bringing Down the House or (sorry Dev) Cheaper by the Dozen 2, but you'd be wrong to, because Martin is one of those people who entirely re-wrote the history of comedy. His stand-up years alone will write off most of his film-choice misdemeanors, and he has not only starred in some of the greatest movies of the last three decades, too many to even list, he also wrote a whole bunch of them. There's no one else who can pull off that kind of goofy, nervous physical comedy, and his surfeit of roles in family-oriented films just goes to show how loveable he is. To paraphrase the Beatles – there's something in the way he moves.

Ask anyone what they think of Steve Martin, and chances are they will find some reason why they love him. Ask Dev, and he will give you 1500 words on why he loves him. And not just one Steve Martin, all the many faces of Steve Martin, from Mixed Nuts to The Jerk, to Little Shop of Horrors to, yes, Cheaper by the Dozen, Bowfinger, Dirty Rotten Scoundrels, Parenthood, Father of the Bride, LA Story, all of it. Sit back, read this interview and let all those wonderful memories wash over you. It may even intrigue you to see Pink Panther 2, which is out this month. Baby Mama, however, not really worth it, unless you want to get the DVD and fast forward to the Martin bits. Man's a genius, nothing else to say. Emmy: When did you realise you loved Steve Martin?

Dev: You know. I couldn't even say. It really has been a lifetime. I guess I realised it without truly appreciating his greatness , but on face value when I first started watching 'Little Shop Of Horrors' on loop at a ludicrously young age. It was a favourite of my family. Surprisingly his role as the demented dentist Orin Scrivello somewhat killed what would have been a fear for Dentistry.. it was such a good song!! So that's the earliest memory then throughout the years it grew and grew and I guess reached a pinnacle with the release of the memoir's of his stand up years 'Born Standing Up' late 2007.

Which is the best Steve Martin film?

I have an answer for all of these...

The best movie that Steve Martin was in has to be the Ron Howard film 'Parenthood'. Everything was on point during that one. Direction was spot on by Howard, the casting was genius, and as always Howard knew how to get the subtleties of the human emotion across without shoving it in your face. A great movie.

The best performance Steve Martin has given as an actor would have to be 'Planes , Trains and Automobiles' or 'Roxanne'... but I shall discuss 'Planes , Trains...' as I think his talent is vastly under-looked in this movie in regards to how big it became and the comedic connotations applied to it when brought up in thought.... as usual for a John Hughes movie... you look back on it remembering a lot more comedic or classic elements than may actually be in the film. I remember thinking all kinds of shit happened to Steve Martin and John Candy's characters... but when you view it again, it's really only a few incidents. But anyway this is the best role for acting steve martin has been in. He plays the character Neal Page in such a genuine believable way. You have to remember that Steve Martin really had never played that kind of person before in a movie. I guess you could say he developed the high strung-ness somewhat for his role in Nora Ephron's 'Mixed Nuts'... but he is a delight to watch in 'Planes Trains...'.

Now, for the best comedic performance he has given in a movie I first have to mention, I think period when he wasn't actually in movies, so his appearances were cameos are golden. Great moments, he'd pop up.. have 5-10 minutes on the screen, and outshine everything and everyone else. The muppets movie cameo as the waiter.. 'Sgt Pepper's Lonely Hearts club'... a classic time..

But I guess his funniest performance would have to be ... god this is tough, Maybe 'The Jerk'. But that was his first movie, and I don't think it particularly ties in with the rest of his movies. 'The Jerk' is really like a celebration and goodbye to his stand up.. it features countless routines he would do, that he just wrote into the film. The very first line of the movie was what sparked the whole idea of making the film..(being born to a poor black family)..

His best film as a writer is without a doubt 'Man with Two Brains'. It's the perfect combination of his writing, Love story, comedy, insanity, irony... it has everything. It's such a wonderful film and story, and he himself is amazing in it. Even referencing his stand up at several points. A masterpiece of a movie.

A lot of people say his quality control has nosedived in the last 20 years. What do you say to them?

Well, I assume you are talking about since 'Parenthood' in 1989. And I can definitely see your point.The main thing you need to remember is apart from movies like 'L.A. Story' (another great example of Steve Martin's writing for film) and a few others, he stopped writing the movies he was in, and solely appeared in them.

The 'Father of the Bride' films are great, 'Mixed Nuts' is awful... 'House Sitter' is great, and 'Sgt Bilko' is pretty good. They may not match up to earlier standards but that is o.k... I feel his Bibliogrophy during this period more than makes up for that.

'Cheaper by the Dozen' is incredible... I take delight in anything that unite Tom Welling with Steve Martin.

I view every era in a different light thought.. maybe if I had to say something negative, late 90's early 2000's is my least favoured period.

What do you think of Keanu Reeves in Parenthood'?

Do you think 'Bowfinger' was a rare return to form for Eddie Murphy and Steve Martin? Do you think they'll ever do it again?

They would never do it again because Steve Martin is on another plane than Eddie Murphy... It's something I don't think most people realise. But Steve Martin is someone that has had multiple grammy records... two for comedy, but one for best country performance in 2002, in the banjo world he as seen as a master of a five finger technique where you push down with your nails rather than plucking the strings. He has written some of the toughest banjo music to play in the last twenty years.

He as had countless best selling books, ranging from novellas, to prose, memoirs, and plays.. and his intelligence is completely out of this world. The fact that he got famous for his comedy in the late 70's is astounding considering the stuff he was doing, the techniques and ideals he was going for and the whole idea of "Anti- Comedy".

Eddie Murphy recorded a hit single with, written and performed by Rick James. I'm aware people would LIKE to think that this is a more incredible feat..but get real.

Unfortunately I did see 'Baby Mama'... and it's episode four of new '30 Rock' right? I'm waiting for the season to end so I can watch them all in one go online. But I guess, tied into this.. somewhat, I was in the Rockerfeller center last week to see Steve Martin host his 15th SNL. That was incredible.

[note- unfortunately the Steve Martin episode of 30 rock is not the best one. Series three picks up pretty quickly though after they quit with all the celebrity cameos.]

**Do you care for the 'Father of the Bride' series?

Am I right in my conviction that a movie without Diane Keaton is NO MOVIE AT ALL?

A Real Estate investment without Diana Keaton is No investment at all!!!

Are there any things that I've missed out about Steve Martin that you need to add?

Have you heard his joke about the sprocket?

HAHA, of course!! It's on 'Let's Get Small'. That right there is a prime example of what I meant about I have no idea how he got huge in the 70's... telling jokes that are intentionally weird and not funny... he had this whole thing of not telling punch-lines also... that way when the laughter would come it would be more natural. A true genius.

Maybe A wild and Crazy Guy. He was flying high at that point.

What current comedians are worthy enough to follow in his footsteps?

Will Ferrell is funny. In our opinion his website has overtaken cranking in the top ten antidotes to boredom of all time. Go here for a few of the best videos http://www.funnyordie.com/will_ferrell.