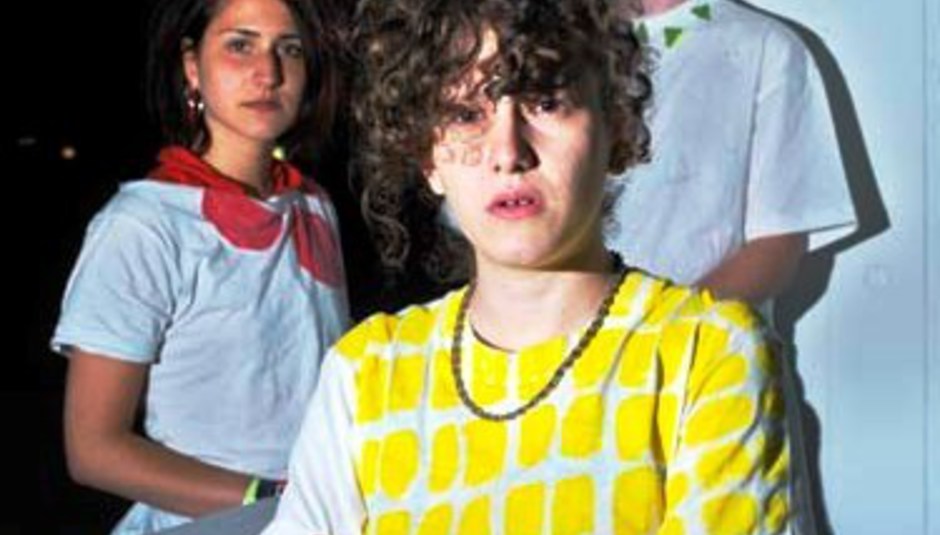 If you've been following the progress of 21-year old Mica Levi, or Micachu as she's known to her Pokemon pals, you may have noticed a shift in release date of her debut album, Jewellery. The album, which has been collecting nothing but four stars since its first rounds around the press, was due out on February 2nd, but a quick rifle through your record collection will reveal that you don't own it yet. Has it been lost? Borrowed? Stolen? Did you forget to buy it? Have no fear. It's simply been pushed back a month, to accommodate a new label, Rough Trade.

A month is not a very long time. We're already halfway through February and you probably can't even remember what you've done with it. There are lots of ways you can amply distract yourself until March 9th, when Jewellery does come out. One of these things is go and watch Micachu and her band, the Shapes, while they complete their first big tour with Late of the Pier. Another is to learn the basics of a new language, watch an entire series of TV on the internet, or start volunteering at Oxfam books. Whatever! Once that release date arrives however, you should do yourself a favour and pick up a copy. With its amazing array of ideas and sounds laid over very simple song structures, listening to Micachu's music is genuinely eye-opening experience. There's truly nobody else like her, and that's a very rare thing.

I emailed some questions to Mica on the Late of the Pier tour, and received them back with almost no punctuation. It was actually really fun to read, but I added some commas here and there to make them slightly less daunting. I hope I didn't alter any of the meaning. Anyway, here is Micachu - enthusiastic, funny, brimming with ideas and making up words just like she makes up instruments. Just don't read it too fast, you've got some time to kill until March.

Jewellery is out via Rough Trade on 9th March. Emmy: I hear with distress that your album has been postponed until March. What's going on?

Mica: Please don't be distressed! It's because we recently signed with rough trade which we are very excited about, and they have to do things like make the cds etc.

Are you still going to be working with Accidental in the wake of the new signing?

Yes it's a family matter, accidental are great and rough trade think that as well. Nothing would have happened to begin with without Accidental and Matthew.

Are there going to be any changes or additions to the record?

No, me and Matthew just beefed up some mixes but that's it nothing drastic.

You're currently on a long tour with Late of the Pier. Is this the longest tour you've done as a band and how are you enjoying it?

Yes it is the longest feels like its been a month already I lost my phone in LOTP house, which sucks!

They are an incredible band, really amazing songs and great minds and performers. its so nice they asked us to come! we are also hear with Connan Mockasin who is enchanting and very unusual lovely music. We are quite crap at touring. Raisa is learning Italian, Marc is finishing his degree. It's a strange life style we will settle.

Do you manage to get any writing done while you're on tour?

Sort of, its good to have quiet to write, I find, but I have made some mobile phone video's and I'm trying to do odds and ends Raisa lets me use her laptop to. I think if there is a little book in your life to sketch down bits you can keep your self relatively sustained.

You seem to have a lot of fun coming up with new genres for interviewers, does their attempts to pinpoint your music amuse your, or does it ever bring you down?

Its not as fun as you might think… It's a necessary part of explaining music in print I suppose. We call it pop mostly out of lazyness. I find it hard to commit to styles often. The band is quite flippant although instrumentation etc homes it down hopefully towards a sound that's our won as a band. We would like to become more hard core.

You described Jewellery as a collection of pop songs, but we know that the album doesn't sound like Take That. What does the term pop mean to you? For example, to me it's all about the song, so I've always thought Nirvana sounded like the Beatles.

Right! 'Penny Royal Tea' is very Beatlesy! We mean pop in that it flutters around a few different styles, with no real commitment. Like Britney will have a country a hip hop a rock and a house-ish track on her album. Although sometimes the substance of the song is lost with me im often more fascinated with sounds and textures I'm working on it though I get the trade a bit more now.

Sticking on the concept of a collection of songs, are there any running themes that run through the album, or is it just your repertoire up until this point?

Repertoire up to this point I reckon, nothings to thought out in that way although as a starting point it helps to contextualize ideas for the next record.

Your classical background is well known, as is the fact that you have composed a piece for the London Philharmonic. Do you find yourself itching to express yourself in different mediums, or do you think you'll be concentrating on Micachu and the Shapes as it starts to get more serious?

I think a lot of people have touched classical music education especially in this guitar boy culture. I enjoy the different approaches to writing but the final results hopefully don't differ in intent between all the writing styles. Being in a band is a great place to try out ideas. Marc and Raisa are amazing brainiacs and we bounce ideas around a lot and cus each others ideas as well it's a trusting environment to write and play in sometimes its easy to feel like a dick head standing on a stage especially with a guitar!

You cite Harry Partch as an influence, can you explain more about how his influence is felt in the album? Is it to do with the fact you make your own instruments or is it more than that?

Well this one doesn't have any acoustic home made ones on it. Electronic instruments were made arguably on logic but it's more his approach to music invention. I like how hypocritical he is sometimes but its only because he desired things which were hard to achieve with out some compromise. Errrrrr essay mode.

He thought, 'sod society, I'm going to be a gay hobo and ride the trains around the fruit harvests... I'm also going to fuck western classical music a little and invent my own intonation based on natural harmonics and therefore my own instruments to facilitate this grand idea of mine.' Bananas!!

Have you ever thought about making music for films?

Not really Raisa is really good at this sort of thing. I think it's an ambition of hers for when we are grown.

You're advertising your first headline tour for April. Having previously mainly played support, are you looking forward to working on a longer set? Do you have anything special planned now that you know the audiences will be into it?

Oh crap haven't even thought about that yet. Don't know I reckon middle age men are our best bet.

A lot of reviewers have responded to the lo-fi quality of the album. Was this a financial constraint or is that how you hear your music sounding?

Not financial, its actually quite warm and valvy and should have some bass frequencies. when I brought the tracks to Mathew I had been working through headphones he pointed at an empty space on his audio analyse where the bass frequencies should be.

What are you guys listening to on tour?

A fantastic lime headed dog compilation, Tim Exile, the Invisible, Jadakiss and Will the driver does a lot of Radio 4.

We're filling our travelling time with watching DVD's. Have you any recommendations? We can recommend the episode of King of the Hill where the neighbour's daughter gets her period.

Thanks will keep an eye out.

[Since asking this question, we've actually finished a whole series of the Wire, and we can confirm, it is perfect.] By the way, do not think it's gone unnoticed that you are the voice of the cervical cancer vaccine. You could potentially be saving lives as we speak. How does it feel? And I mean the honour of the title, not the actual process of vaccination.

It's an amazing medical development, its an honour to have been involved.

To find out more visit: http://www.myspace.com/micayomusic