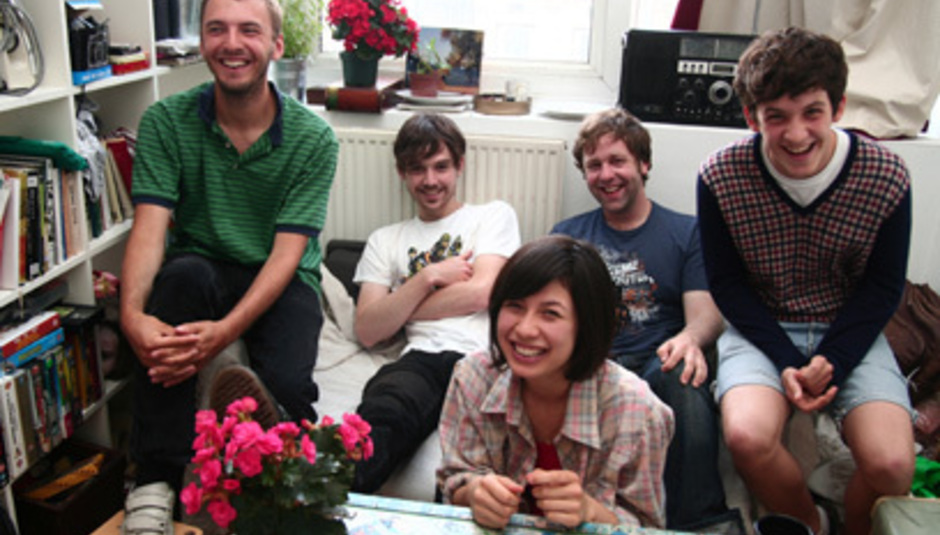 Less of an ‘interview’ and really more of a meandering conversation, that took place on the second night of the First Love UK Tour. Enjoy…

DiS: The song ‘First Love’ appropriates ‘Hallelujah’, which has, for a few reasons, come back into the limelight of late…

Yeah! It was really weird. Before – when I wrote the song I didn’t even know Leonard Cohen was playing Glastonbury, it just popped into my head, as something that someone would have in a room. If someone only had one tape in a room and all they had was a tape player, what would they have – like what’s the most common song they would have? That’s the song. But then I went to see Leonard Cohen at Glastonbury, and I went to see him twice again that summer, and it became like ‘My Leonard Cohen Summer’. It’s quite a famous song, actually! And then that X Factor thing…it was like, why has my song become so topical? It’s so weird. Now I can’t separate singing it from watching Leonard Cohen and just being like…

DiS: Do you have a favourite show or gig, ever?

That was pretty high up. All three Leonard Cohen shows are pretty high up. I’ve seen Diane Cluck a few times, and yeah, she’s one of my favourite things ever. Seeing The Mountain Goats in Glasgow made me cry…but then I had a bit of a…well, Euan stood too close to me and I was like, “Get the fuck out of my way!” and he was like, “no, ‘cause I’m watching a gig too!” Um…I watched Radiohead at Glastonbury, saw Blur at Reading when I was a kid, that was amazing. And I’ve seen Weezer.

Oh Lemonheads! In the summer at Truck – fucking amazing. And that was Euan’s birthday.

DiS: Coming back to the album…I think, although there’s certainly some darkness there lyrically, I generally draw from it a sense of optimism. Would you agree with that? Or rather, was that your intention?

I’m really pleased you said that – people keep being like, “oh, it’s so dark,” but I always…my songs are all about how much I hope, for nice things to happen. I don’t know. But even – whenever I read books, I’m like – someone yesterday, some kid in the crowd was talking about Samuel Beckett, and how I’d written the song [‘First Love’ – named after and based on the Irishman’s brutal short story] the wrong way round from the story. But he was like, “what do you like about Samuel Beckett?” And I was like: “I like how optimistic it is – that there’s this one person who’s free, pretty much, from all constraints.” He was like, “Samuel Beckett: is the deepest darkest thing in the world.” And I’m like, “Yes – but when I read it, I feel really hopeful; I feel really free.” That’s what I get whenever I watch a movie or read a book. I always feel optimistic, even if it’s quite horrible, or bleak.

DiS: I think it’s a great thing though – to be like that, and be able to interpret things that way.

At some point it’ll get beaten out of us, I’m sure.

DiS: Your family found ‘Everything Reminds Me Of You’ really weird. In what way?

I don’t know – I think just the end bit. I think with my family – not so much with my brother – but they just want to hear the words really nicely. They really like the Norman Cook [BPA] stuff.

DiS: Oh yeah, how did that come about?

He came to a gig, and he asked if I wanted to sing, and I ended up writing the song over one of his backing tracks.

DiS: Cool. I’ve not heard the album – I think it’s out now, or at least very soon…

The album is good.

DiS: How was the video?

DiS: I just saw the video for ‘First Love’ actually, which looks great…

That was Ferry from the Semifinalists, directing.

DiS: I really liked the ‘We Almost Had A Baby’ video.

I – I wrote that video! Apparently it had the worst response, from a video plugger’s point of view. Or anyone – it had so few views on YouTube, everyone got kind of worried, and said that we need a “real” video. I really liked it!

DiS: I thought it was pretty funny.

I thought so. Apparently I am no longer allowed to write them.

That was our first compromise, I guess – to the industry. But then, we did give it to Ferry.

DiS: What would you say to the people who express surprise at your lyrics, or construe them shocking, as such?

I don’t get it. They’re not that shocking. I mean, like – what’s actually shocking? I think about what’s shocking, then I think about my songs. I just can’t… But then – I’m constantly stressed out that I’m mediocre. Well, not stressed out, but I’m very aware that I’m not this gigantic talent or whatever. So, when someone says to me that they find the songs shocking, it makes me kind of happy, because it means they’re having an effect that isn’t one of mediocrity.

DiS: Perhaps it’s because of the juxtaposition, sometimes, of the melodies and music with the lyrics…

I don’t do it on purpose. The melodies are only there so that I can get the words out. Sometimes when I’m singing my songs I actually think about my lyrics, and I’m just like, “where’s the shocking lyric?” – I can’t find it.

DiS: How come you chose ‘City Song’ to close the album with?

Yeah. I didn’t want to listen to it anymore. Every time I sent an order in I’d slash five songs off, like, “they’re all shit!” so eventually we chose one of Tom’s. And we could never find a place to put that song in the middle. It was going to be ‘Everything Reminds Me Of You’ then ‘War’, but then we decided we liked ‘War’ enough to put it nearer the top.

DiS: I think it flows really well. But then I keep going straight to ‘First Love’.

Oh, thanks. I read a couple of reviews of it that absolutely trash that song for plagiarism. But I don’t think it’s plagiarism, when I acknowledge so clearly what it’s about.

With that we’re pretty much done, forgetting to ask about The Get Up Kids (for whom the album is “In Memoriam”), though having already taken longer than expected. Moss is wonderfully open to talk to, comprehensively charming Exeter Phoenix later on. Whether it be about something that enthuses her or quite the opposite, she often reveals the most – a long-standing fear of mediocrity, for example – on a tangent, or when you least expect her to. You could level this characteristic at her songs too which, far from shocking, are better described as disarming: in their frankness, their honesty. Mediocrity, certainly, is the last thing she ought to be worried about, though perhaps the very fact that she does is key to her making the music that she makes.