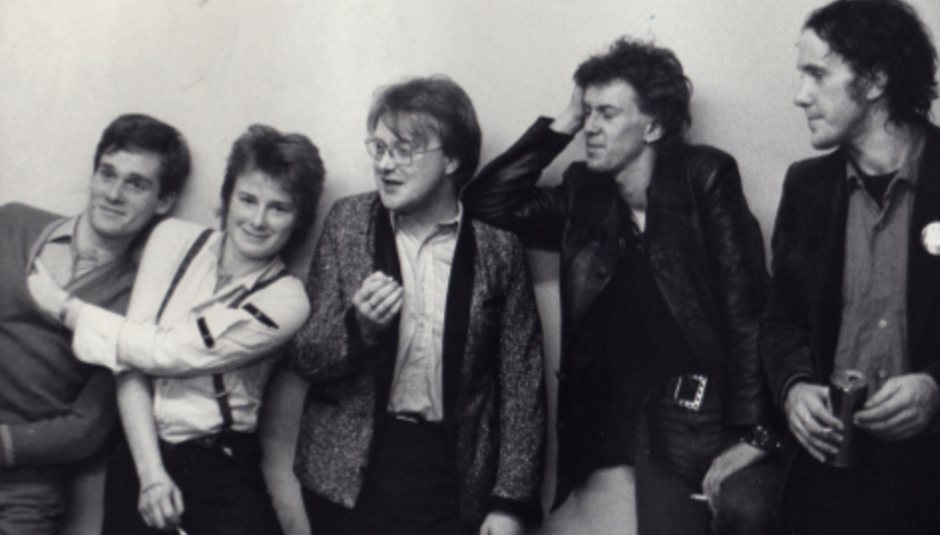 After recording 4 tracks for TJM at Arrow Studios in Manchester – somewhere near Bootle Street, in November 1978, we had struck-up a friendship with their house engineer, Brandon Leon. This EP (You’re Not Going Out Dressed Like That) was released in March 1979.

Brandon asked us to record a couple more tunes in free ‘overnight’ sessions, so we recorded ‘Pillow Fight’ and the first song of Adrian’s, ‘Time Goes By So Slowly’.

In May that year Tony, who we had long known from the Factory at the Russel Club, had asked if we would like to record a couple of songs for a Factory single. To save on costs we used the two we had, offering ‘Pillow Fight’ as the A-side and as then untested on stage ‘Time Goes By So Slow’ (‘Slowly’ becoming ‘Slow’ because the tape title had that written on it. Due to the long title, Slowly would not fit…)

Tony was very pleased with the recordings which he had discussed with Rob and Alan asking if they could flip the sides and have Time Goes By So Slow as the A-side, to which we happily agreed. (In the ‘flipping’, Steve and I were credited as writers, Adrian shown as writing ‘Pillow Fight’. This was not corrected when Island re-pressed…)

A sleeve was designed by Pete Saville and FAC12 was released in August 1979. It received critical acclaim with our second ‘Record of the Week’ in NME among others. Tony had been setting us up for a deal with CBS, but Island Records beat them to it in September. Island pressed another 5000 copies, but would not press more. The cynically minded would suspect that was to create interest for the first Island release.

The recording session for 'Time Goes By' took place at an overnight at Arrow, but as this was intended to be the B-side, recording was ‘live’ with very few overdubs. The drum and bass bridge to the choruses was arranged in the studio, based on an idea by Alec, which adds a dynamic previously missing. I sang it with one light on in the studio, I would have sang it in the dark for atmospheric reasons, but needed one light to see the words. The whole thing was finished in about 3 hours, including the lead guitar and vocal overdubs and the backing vocal track, which was all of us following Steve’s harmonies. Ah well, Nobody’s Perfect!

Adrian tells me that the song is a Pygmalion analogy with his girlfriend becoming a statue in Albert Square devoid of the senses... by George I think he had it! (See the lyrics below)

Difficult decision because there have been so many ground-breaking issues from the label. New Order, Happy Mondays, Crispy Abulance, Section 25, Cath Carroll, Cabaret Voltaire, Durutti Column, all are so different where can you start?

So I took the songs that meant the most to me personally. Here they are and why:

And here's the hand-annotated lyrics to 'Time Goes By So Slow':