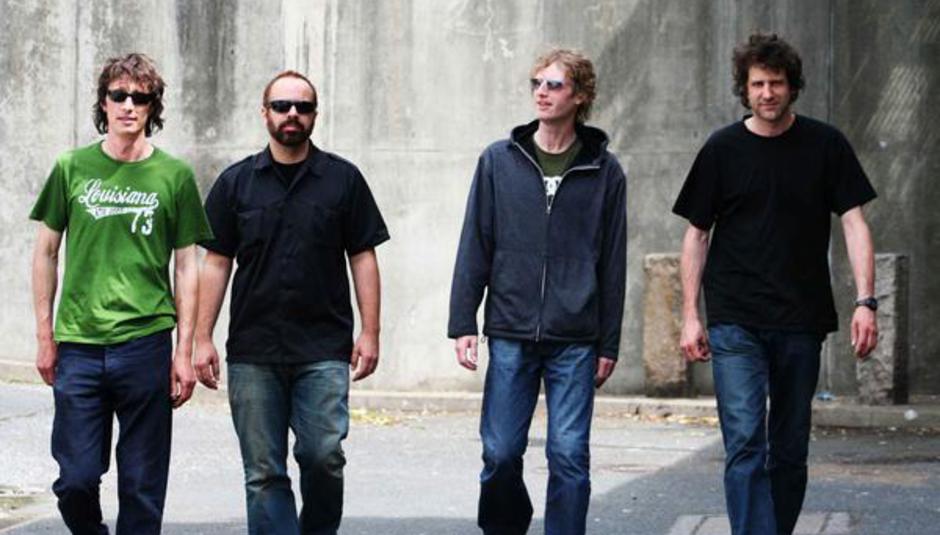 Ah, the years between Strangeways Here We Come and Britpop... it's cast as a bleak time for music – The Wonder Stuff, The Mission, Ned's Atomic Dustbin – but, hey, suddenly all the garage bands had those FX pedals that, previously, only U2 could afford to get built for The Joshua Tree. You know the scene as shoegaze, which makes it sound like it might not have rocked much but, a lot of the time, the point was to take the next step on from The Jesus & Mary Chain (i.e. Phil Spector + The Stooges + feedback). Admittedly, the term 'shoegazing' gives you a clue that there also might not have been a lot of musicianship, but it sounded new circa 1991, and it's strange to think that even Red House Painters (now Sun Kil Moon) were once considered shoegaze.

Funny thing is, much as we at school appreciated Ride, and as much as we loved Curve (ever seen a picture of Toni Halliday? Her singing's pretty hot, too...), well, somehow no-one seemed to have any Swervedriver for taping. Over the years, I've tracked down Slowdive's pastoral take on shoegaze, and I've also felt vindicated that Andy Bell joined Oasis, seeing as how Definitely Maybe was basically a laddish appropriation of Ride's sound; the latter hailing from Oxford, as did Swervedriver. (There's a segue coming, by the way, in case you were wondering.) See, those of you who were into Swervedriver back in '91 won't be disappointed by these re-issues, with their full album-and singles-artwork, worthwhile bonus tracks and essays from the main songwriters. You probably bought the albums on cassette or vinyl, right? Maybe, though, it's the present-day Oasis fans who might actually want to go back and re-DiScover an old band who have some of that visceral rush, albeit fewer anthems.

Debut album Raise (1991) starts strong, although concentration wanes pretty quick. The Stooges with pedals they may have been, but the simple fact is they didn't have an Iggy. If you only have one note to sing on, and some uninspiring images – not even catchphrases, as most chart bands manage – well, couldn't you howl a bit more? Slightly more varied, Mezcal Head (1993) alternates between the (updated) English psychedelia of Ride, and the American slacker soundtrack of Dinosaur Jr. It's not varied enough, and the album's motto "Jesus ama Los Swervies" needs no explanation – the classic T-shirt slogan "Jesus loves The Stooges" had already been borrowed by the Sisters, a decade before, telling us their way of showing their influences ain't even new. Regrettably, the most interesting track was omitted from the original album – the 12 minute 'Never Lose that Feeling', which adds some sax (okay, I didn't say it was great; just "most interesting"). Bonus tracks, 'The Hitcher' and 'Cars Converge On Paris' also have the best melodies yet, even if the band probably pushed them aside for being too nice.

Third up, Ejector Seat Reservation (1995) largely dispenses with the driving rock of previous albums. Not that Swervedriver made Top Gear-friendly cock-rock anthems, but rather the older songs sounded like a dragstrip, and were replete with images of cars, in a conscious but rather pointless homage to - yep - Motor City legends The Stooges (see the sleevenotes for further details). Wrongfooting the listener – but also, it seems, the band itself – Ejector Seat Reservation starts off much like Ride's Byrds-y/Beatles-y Carnival of Light until you get suspicious that Swervedriver are trying to go the whole hog and do a White Album when the lamentable 'I Am Superman' kicks in (lyrically, an un-funny, un-catchy 'I Am the Walrus'). Later, the title track is passable psychedelia, with mixing that makes the band sound like they're falling down a hole courtesy of the sitar-like sounds toward the end, and a whining refrain that's nicked from Nirvana (geddit?) - "Go awaaaaay!" Next up, 'How Does It Feel To Look Like Candy' blends song titles from Ride and JAMC, perhaps to show who the former are cribbing, whilst adding "Do you know the way to Santa Fe/Ba-baba-baba-ba!". Painful. The song after that ('Last Day on Earth') has one of the more confident vocal-parts, a string arrangement and a solo worthy of Blur or Oasis, but still feels the need to crib another Ride lyric: "Angels descend from time to time" (sung to a much better hook, originally), and generational catchphrase "Live forever" from the fledgling Oasis.

After a certain amount of this (oh, there's more...), it gets a little embarrassing, like Todd Solondz in Storytelling, taking the piss out of American Beauty because he didn't think of it first. Maybe they're not taking the piss, but like I said – you need to have that immunity to stealing that lets Oasis fans love their heroes. If nothing else then, this belated introduction to Swervedriver tells us how much shoegaze needs a reappraisal (favourite albums on a postcard, please, DiS readers!), even if "the Swervies" don't so much. Instead, check out Curve for a pummelling combination of programmed and live drums, massive bass, raw guitars, and – yes – indie-diva Toni Halliday (sorry for the objectification, earlier, but her looks just seemed the best comparison for her voice... plus, intelligent lyrics are sexy). Check out Slowdive, and Ride next, in fact, check out Bob Mould's post-Hüsker Dü band, Sugar, if you haven't already. And if you're still hungry, then it's time for Swervedriver – but not before.