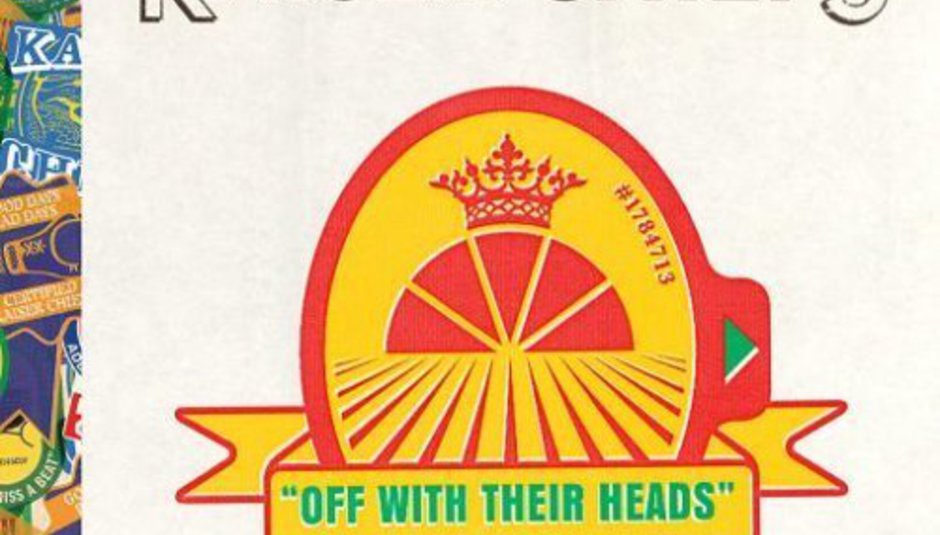 DiSection: Kaiser Chiefs 'Off With Their Heads' track-by-track

DiSection: Kaiser Chiefs 'Off With Their Heads' track-by-track

Welcome to Kaiser Chiefs week! The Leeds-leeds-LEEDS boys, our old friends (well, like, yuhknow, we released their debut single 'Oh My God' way back when), have hijacked DiS this week. They kick things off with a track-by-track rundown of new album Off With Their Heads by KC's bassist, Simon Rix.

It features five part harmonies in the verses which is the first time we've done that. It starts the album and it's the only place we thought it could go, first of all because it's a big exciting start and also because we see it as the intro to the album. It leads straight into...

'Never Miss A Beat' is the first song we wrote for this album. At the end of last year we wanted to write some more songs, mainly for live. We'd done a lot of summer festivals and we wanted to have something new to play to people coming to the big tours we had planned in the UK and Europe to make them a bit different. We also had a big gig at Elland Road coming up and we wanted to have something new out for that. The plan was to have something pumping in a dance floor way but also something that built up and was euphoric. Nick wrote most of it on bass and it came together quickly - as we find most good songs do. It's a song about how kids are important and are not to be undervalued.

This song features strings, arranged by David Arnold. He's become a friend of ours since we did the Electric Proms with him last year. After that he said if we ever needed anything, just to ask. When we were making the album he came to the studio next door to work on the Bond theme with Mark Ronson and Amy Winehouse. We'd done a short session with Mark and Eliot (James) in February and done three songs: 'Never Miss A Beat', 'You Want History' and 'Like It Too Much'. We were really happy with the first two but we knew 'Like It Too Much' needed something extra. He recorded a demo using synthesised strings over the top of the track and sent it to us. They were brilliant but ridiculous. It sounded like 'Yellow Submarine' Beatles (the George Martin half) All singing, all dancing. Massive, but too much. We asked him to record what he'd done but with just a string quartet. When it was finished and mixed it was great and athemic. All was well in Pepperland! It's also got some of my favourite words on the album including the album title Off With Their Heads. It's the third line of the third song on our third album. We like stuff like that. We're pretty superstitious. (You can hear this one on our MySpace)

This was a deliberate attempt to get more dance floor. It was the second song we wrote for the album, written in the same few days as 'Never Miss A Beat'. It has two parts that are separate but they were always part of the song. The first part is like a more traditional song, Verse - Chorus - Middle 8 affair, although still different with lots of great keyboard sounds, The Who drum fills and some cool backing vocals in the chorus which are one of the main hooks. The second part is more electronic and builds up and builds up like the euphoric crescendos you get in dance records. It's loosely about going out and doing something rather than just sitting in and watching TV. (You can hear this one on our MySpace)

It sounds like the very first songs we wrote together. It's got a bit of a sixties sound. On this album we recorded to tape a lot, especially vocals. We did the Sgt. Pepper tribute album last year, recording on the original desk. We enjoyed the restriction of that but also the sound of it and wanted to try and recreate a bit of that on our album. It's a very up tempo song that pounds along and I think it'll become a bit of a live favourite when the album comes out. This meant we wanted to record it just like we play it. We didn't use a click or metronome as we wanted the songs natural speeding up and slowing down to stay as that is part of the character of the song. So one evening we went into the live room and played it about three times together exactly as we would on stage, to capture the energy. Mark had his top off and declared it his favourite Kaisers song ever.

This song is inspired by Tom Tom Club and ESG. It's has a very steady groove. It's something we've not really done before. It's hard to keep the relaxed feel going when you get exctied about playing and writing a song. The lyrics took a long time to write and there have been many different versions. It's working title was 'Hello Groovy' because initially it was just a groove that we liked and wanted to put on the album but we weren't sure how it was going to happen. The final inspiration for the lyrics came after our Elland Road gig and the day after, going to watch Leeds lose in the Play-Off final at Wembley. It's about that and about supporting the underdogs and a few other things thrown in. For me it has a feel of Happy Mondays about it too. It's one of the band favourites on the album. Here's the "fan version" of the video...

'Tomato In The Rain'

This song has a title that everyone seems to be intrigued by. We had written most of the music for this song in Old Chapel (a rehearsal room in Leeds) and then the title just came out of nowhere. When we are playing in the room, Rick and Nick often just sing things over the top until they come up with something good. Sometimes the best lyrics just come into your head. So one of them will be singing something and then one of them will say; "did you say 'Tomato In The Rain'?" The idea will then develop from there. I think in this case Nick came up with the title then Ricky went away and wrote the rest of the words. There's a lot more imagery on this album than the last one. Particulaly in this song. It's meant to be a laid back Beach Boys kind of song and features some old fashioned style backing vocals from Nick that you don't really hear much any more.

It started with an idea we'd had for a while but was mainly written in the studio. We had one section but no idea where to take it. We tried out lots of different things, making stuff up and going round it again and again. Mark and Eliot were in the control room listening whilst we were playing in the live room. Then Mark came in and had an idea for a drum beat. After that we got a simple bass riff and Whitey played the cool guitar riff and it just grew from there. It features Sway, who came to the studio looking for Mark Ronson but he wasn't there. Just after he left we were talking about 'Half The Truth' and I was suggesting to Nick he should double up the end of the lines, sort of like rappers do. Eliot said that we should have got Sway to do it, we replied, can you get him back? So Eliot got in touch and he came back an hour later to do the backing bit and ended up doing the rap over the instrumental section too. Only me, Nick and Peanut were in the studio that day, so when we saw the others it was odd explaining what had happened.

This song began with two chords that Whitey started playing on the piano. It was the first day we moved from Rak to Eastcote. I think we were intending to record 'Spanish Metal' but we ended up writing two new songs. Nick was playing guitar and I was playing drums. It started off really really slow, but when we got back to our normal instruments we built it up. This was a song where the two producers had a really big role. Eliot did a lot of good things with delays and gave the song it's distinctive sound. Mark wasn't around when we actually recorded it but he heard it and it was his idea to ask Lily Allen to do something on it. I think that was the final thing that took the song from being a good little song to a big song on the album. Which was a surprise really because we'd got to the point where the album was finished and suddenly we had another one to add to it.

It is a first because it's the first time we've done two different versions of a song in the studio. There's one melancholy one which we worked on for a while. It had a couple of bits we really liked but one day we thought we should have another go at it because the combination of the title, the sentiment and the downbeat-ness made it sound judgemental, something we always try to avoid. The second version started with a beat and loads of percussion, including Mark playing the a-go-go bell.

'Remember You're A Girl'

Nick sings this one. It's a bit of a ballad. We played it through in the rehearsal room a few times: Me on bass, Peanut on drums and Nick singing and guitaring. We recorded it like that in Old Chapel and liked it. We knew it wasn't finished but we didn't want to ruin it by overcomplicating or over-thinking it. We never played it again until we did it in the studio. Nick kept the same drum beat as Peanut had done on the demo because we thought that was very important to the feel of the song. He used tea-towels on the drums and they were mic'ed very closely to get more of a sixties sound. A lot of good albums are like a night out, starting with getting ready and going out and reaching a peak and then going home and the night winding down. That's why this song is really important on the album and is the last song.

Off With Their Heads is out today via Polydor/B-Unique_. Listen to it via Last.Fm.