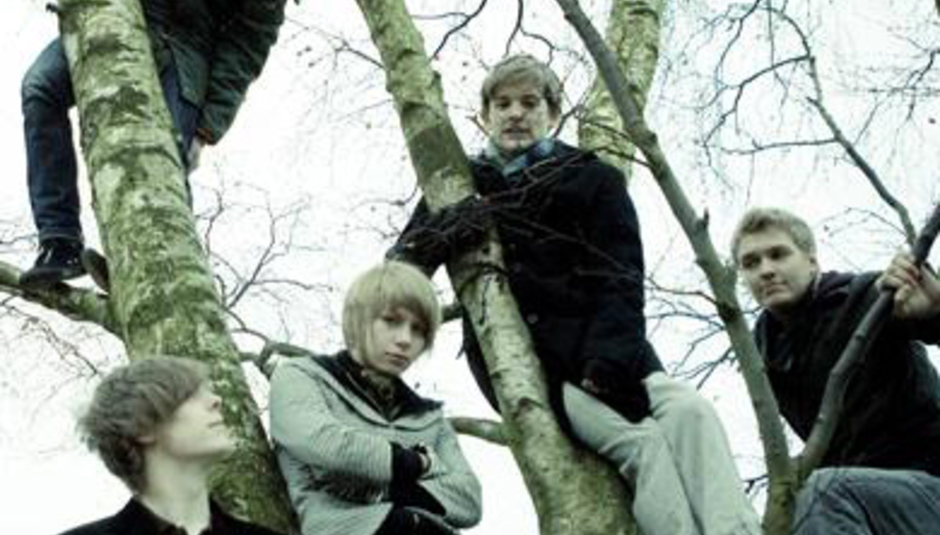 Something, you can only assume, happened on the way to the classroom – a wrong turn, probably into a chaotic chemistry class, and a happy accident. How the five fresh-faced members of Rolo Tomassi (their oldest member is just shy of 20) first gelled isn’t totally clear, the particular line of questioning never followed because it’s boring, and it’s for the best: music like theirs shouldn’t be reduced to a succession of bullet points, a mapped timeline and a chart of future projections.

And what is music like theirs? Words like visceral, acerbic, fiery, convulsive, combustive: these have all peppered previous assessments of the quintet’s live shows and recordings to date. Of the releases already available, the Sheffield band’s self-titled Holy Roar-released EP of 2006 – re-issued in a slightly expanded form a year later – is the most widely known, and was also DiS’s introduction to James Spence (keys, vocals), Eva Spence (vocals), Edward Dutton (drums) and Joes Nicholson (guitar) and ‘Bean’ Thorpe (bass). Reviewed here, the EP made an impression significant enough to see an invite to play the site’s DiScover Club dispatched (and accepted), and the band play a number of further one-off DiS shows and tour under the DiS banner in 2007 alongside Meet Me In St Louis. We were smitten from the outset.

Now, the slate’s ready for cleaning, the past considered passed and done with; on the horizon is the beginning all over again, a debut album by the name of Hysterics (released September 22) and a new label to call their home in the stable of Hassle. Tour dates are booked, expectations are bubbling, existing fans are getting into a dizzy spin of anticipation and could-be converts anew are relishing the opportunity to either rate or slate the fivesome on their travels. Music like theirs, y’see, doesn’t do Middle Of The Road, Indifferent Appreciation or So-So Shoulder-Shrug S’OK I Guess. It does: Fucking hell, that was incredible or Fucking hell, that was insufferable. If you already sit in the latter camp, what comes now, rampaging from that horizon, will probably destroy you.

Because what is music like theirs, now? Words like progressive, maverick, innovative and intelligent can be added to the established selection of adjectives. Hysterics is an album of surprises, of disguised blindsides and buried treasure. It begins with a whisper and builds rapidly to a roar, its balance between unhinged noise and unexpectedly beautiful atmospherics near enough perfect. It’s as fine a debut as could be expected given its makers’ evident promise. It will be some readers of this article’s number one record of the year come December, guaranteed.

Hello James of Rolo Tomassi, this is Mike from DrownedinSound…

Well, you could sound more excited…

Sorry, I’ve just had a shit-tonne of stuff to sort out, and it’s been stressful and everything.

Yeah, just press for it, like arranging dates and times that work out for everyone – some things have been arranged while Eva is away on holiday, so they needed sorting. It’s all down to a little miscommunication.

I was going to make this a Track-by-Track piece, but then I thought if you wanted to do that, you could just e-mail me the copy yourself…

Yeah, that’s a better idea. That’s the kind of thing I’d rather have time to think about anyway.

So now I don’t really have an agenda beyond this album, so expect just some general questions about it.

Yeah, it’ll have been the best part of two years by the time the album comes out.

Does it feel that long?

It’s been hard to notice, really. When the EP came out we were all still at school, so we had to focus on finishing that, and the past six or seven months have just been a blur due to all the stuff we’ve been doing. But the period between now and Hysterics coming out is going to feel like ages, as we’re all sitting around at home. We’ve a little time off.

I guess the gap between releases is directly related to your age – if you were older, with fewer or no educational commitments, we’d be seeing Hysterics sooner.

Exactly. We wanted to take a ‘gap year’ to properly write the album. After the EP came out, the time when we could’ve been writing our album coincided with A-levels starting. There was a lot to take in.

Do you think the enforced gap between releases has been for the best? It’s certainly prevented Hysterics from being hurried out…

Yeah, I totally think that’s the case. And it’s not like we weren’t doing anything – we put out a seven-inch last year, ‘Beatrotter’ with ‘Digital History’, and the EP came out again. Throughout that two-year period we toured, and wrote stuff, and we were working on generating interest in the band ahead of this album.

The seven-inch – was that essential, to put out material that wasn’t LP-suitable before going in to do the album?

Those two songs were the first songs we wrote after the EP – both are short and fast, and they didn’t really fit with our vision of what the album was going to be. We put the release out as we weren’t sure when the album would be ready, to keep things going. It came out at the start of our tour with I Was A Cub Scout, which was well timed too as we had something new to sell.

Do you sell quite a lot of merchandise on tour?

We do sell quite a lot off the back of our live performances, yeah.

Turning to Hysterics, it’s got something of a didn’t-see-it-coming start, with twin clearly-discernable vocals over a drone backdrop…

That song, ‘Oh, Hello Ghost’, was written with the intention of it being the first song on the album – it does serve as something of a statement of intent, and I hope it does display a different dimension to our band. There was only so much we could do with the sounds of the EP, and while we haven’t lost that on the album we did want to prove we weren’t just a flash-in-the-pan band. We want to get more people involved, and keep ourselves interested of course. Have you, personally, been discovering a lot of new music recently? I recall my late teens being the period when I really explored a lot of music I’d only previously read about. Has this had an effect on the album?

I totally agree with that, and the environment we’ve been in over the past couple of years has only helped – touring with other bands and hanging around with them. It’s given us a wider scope… everything.

And when critics call Hysterics a prog record, you’ll be okay with that?

And do you see the band being able to morph from record to record, doing pretty much whatever it wants?

I’d hope so. We’re not writing to please anyone but ourselves, so we will do whatever we want to.

Thematically, are there any conceptual threads running the course of the album? Since it is a prog record…

I think, in terms of lyrics, Eva and I… Eva wrote the majority of the lyrics… vaguely focused on the idea of communication. As soon as you write lots of lyrics over a short period of time, they accidentally seem to sit together thematically, so gradually the songs became about the breaking down of communication, or how people are afraid to say what they mean, or how they struggle to. How you present yourself being a form of communication in itself.

The title ties into that concept, then.

Exactly – we wanted a one-word title that could mean two different things. We settled on Hysterics because of that.

Touring – you’ve some busy weeks coming up. Does it ever get a little tedious?

No, never. There’s nothing we enjoy more than touring. When we started this band, it’s all we wanted to do, and that we get the opportunity to do that now is so very satisfying.

Truck seemed remarkable in terms of the reception you guys received. People in the crowd were chanting your name!

That was very, very strange. And it was very flattering. Our aim now is to be filling the venues we’re playing, as we’re well used to the actual touring cycle. The show at Truck was so amazing; we couldn’t really have hoped for anything better.

Do you feel that there’s anticipation for Hysterics out there? The occasional buzz on DiS about it seems to indicate as much.

That’s all I can really go on, too – I am someone who reads messageboards a lot, and if I wasn’t in this band I’d be posting a lot more about the stuff I actually listen to. So yeah, all I can follow is what’s on the internet, and we seem to be picking up little bits of press. I’m still finding it very surreal to look over the whole spectrum of things, of what we’ve achieved, because I definitely followed bands in the past who’ve been through what we’re about to get into. But it’s really difficult for me to get sucked into things like hype – I’m more excited on a personal level.

*It’s important to keep a degree of perspective, and I don’t think all young bands handle even the attention you’ll receive well, at all – some crack, some believe their own hype. *

Right, yeah. There are examples out there to not follow, and because we’re a generation of music fans who’ve grown up looking to the press about who we want to listen to, we’ve sort of worked out how to properly behave. Plus, it’s just common sense really.

You’d have grown up with the internet all around you – with that in mind, are you worried about Hysterics getting out there early?

Not really – that sort of thing, the impact of illegal downloading, really only has a significant effect on mid-tier indie bands, or generally more indie bands. Coming from the more DIY and hardcore background that we’re from, there is a multitude of people who will only buy our record on vinyl, and that’s even if they’ve already downloaded it for nothing. And some who download the album without paying for it might buy a ticket to a show, or buy a t-shirt, so they will still support the band in some way. I think… the fringe fans will download the record, and if they don’t like it, it’ll just sit there on their computer and they’ll forget about it. If people want to do that, I can’t complain – I might have downloaded records in the past and never really listened to them. If people want to find out about the band that way, I guess I’m flattered. That’s not to say I’d be really happy if it got leaked! But we’ve already talked about it – the day it comes out physically it will get onto the internet, so it’s really just a matter of time whatever or however it happens.

Hysterics is released via Hassle on September 22, and find more information on MySpace. Catch Rolo Tomassi live at the following venues: