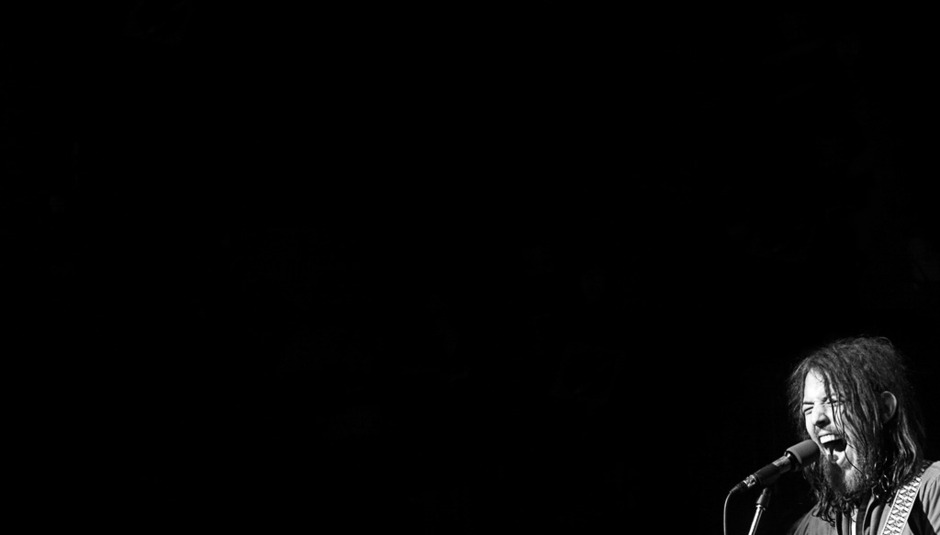 “When you first see that painting it’s very bucolic, but when you look closer there’s all this really strange stuff going on, like dudes defecating coins into the river and people on fire, people carving a live sheep, this weird dude who looks like a tree root sitting around with a dog. There’s all this really weird stuff going on. I liked that the first impression is that it’s just pretty, but then you realise that the scene is this weird chaos. I like that you can’t really take it for what it is, that you’re first impression of it is wrong.”

Fitting, then, that this very principle can be applied as a description of the sound contained within. The Fleet Foxes sound is pleasantly enjoyable at first but only after a number of listens does the dense harmonic sound, with its plethora of interesting instrumentation and vocals firing off in every direction, start to become engrained.

The story of Fleet Foxes begins with a teenage Pecknold and childhood best friend Skyler Skjelset (lead guitarist of the band), who would jam during school lunch breaks. After high school the pair moved from the suburbs of Seattle to the city in order to get jobs and experience life.

“We’d been playing music for a while, but we’d never played in a band before,” says Pecknold. “We didn’t set out to start a band or anything, but just being kind of frustrated recording as two people, we wanted to record with more people.” Finding likeminded people in their new surrounds of Seattle’s Capitol Hill around two and a half years ago, they decided to take things further and Fleet Foxes was born. Although the first incarnation of the band came in 2006 with a self-titled CD-R sold locally at shows in the city (only 200 copies were made, but unsurprisingly these recordings have since found their way onto the internet), Pecknold and company weren’t happy with the direction they found themselves initially heading in.

“I think that EP that we did was kind of like an extension of that frustration I was talking about, it just being me and Skye because we had like 30 recordings of songs from before [that EP] where it’s just the two of us and acoustic guitars. So we were excited to do more of a band type of thing but I think that got old pretty fast for us [after recording it]. It was more stripped down, and I think we wanted to do something less limiting.”

After a stint back at the drawing board, and finding the right five-piece line-up, they emerged - assisted by family friend and producer-extraordinaire Phil Ek (Built To Spill, The Shins, Band of Horses) - with a complete full-length album and accompanying Sun Giant EP (review). Once plonked on the boardroom table of local label Sub Pop, the band had presented them with a set of material they just couldn’t refuse.

“The goal has always been to do what is exciting to us,” enthuses Pecknold. “Sometimes we’ll say ‘You know what, I think I want to change that or do something different’, because that’s always based upon a feeling of frustration of what we’ve just finished or something. We all listen to tons of different kinds of music, everyone’s been in all different kinds of bands. When we sit down in the practice space there’s really no goal with the song – we’re in the moment, trying to see where everyone takes it. We’re not trying to be ironic or facetious or anything besides just music.”

This approach has lead to a fresh and diverse sound that embraces fully the influences of ‘70s US folk acts such as Crosby, Stills, Nash and Young, the Beach Boys and The Zombies, but also brings a sincerity not often found in modern music. As if taking popular song back 40 years to when music was uncomplicated and fresh but throwing the additional elements of baroque composition and lush vocal harmony into the same pot, it’s a sound that could have come from any decade. This is especially reflected in the dense layers of vocals each member sings, and the vivid rural lyrical content Pecknold delivers in his distinctive tenor.

This process of combining different elements and ideas into one has become the trademark of a Fleet Foxes song, and ultimately the band’s biggest selling point. Such resulting diversity begins with Pecknold’s own writing process. “I’ll just figure out a little thing, and then combine it with some another thing that might be written months later,” he says. “The interesting thing for us doing it that way is that it forces us not to do typical structures of songs.”

The singer continues: “It’s kind of weird because right now. I’m trying not to listen to any music at all, hopefully for the next six months or something. I’m trying not to discover new bands or listen to any music really, and see how that changes what we write or what I come up with... I think there is always music that you agree with, not that you are looking towards for inspiration but you really connect to and so I guess growing up listening to The Zombies, The Beach Boys and Joni Mitchell – all that stuff – definitely this music is coming from kind of a similar place stylistically. I think we have tried fairly hard to be unique in terms of songwriting and how to put a song together.”

With songs often benefiting from a new lease of life halfway through (see ‘Mykonos’ from the bands Sun Giant EP for example) he’s not wrong. “Like, I’ll never write a first verse and chorus together. We would never do those two things [together]. It’s more interesting to make something you had no intention to be the chorus into the chorus... I think that by the time we’re done with the second chorus we’re usually tired of the whole song. Just structure wise I don’t think there’s a reason to bludgeon people over the head with some chorus.” The phrase ‘buzz band’ is not one that sits well with Pecknold. After this year’s South by Southwest industry jolly in Texas, the words ‘Fleet Foxes’ appeared to be on everyone’s lips, from enthusiast blogger through to record company exec and broadsheet journalist. Treading carefully, he states: “As a band so much of that stuff is out of your hands. There’s nothing we can really do… (pauses) I think the thing we want to avoid is appearing to be like shoved down peoples throats, you know?” But he knows he can hardly be surprised having arrived as the very latest Sub Pop signings. Such a title will undoubtedly attract the attention of the entire music press. “We just don’t want to chase after, like, an over saturation thing,” he reasons.

Music to Pecknold is clearly not about making a quick buck. The band’s releases contain quotes in the liner notes such as this, which explain in succinct detail the importance and transportative effect Pecknold is seeking to evoke with his band’s music. “I thought crediting the liner notes to myself would be a little much,” he laughs. Instead Thomas Jefferson and Warren G. Harding get the props. “It’s just something to hide behind I guess, that’s unrestrictive.”

Music appears merely a natural progression for Pecknold. His father, a musician throughout his ‘20s and ‘30s, became a film editor once his older sister and brother were born. “Me and my brother Sean split into two different sides of my dad in a way,” he says. “My brother became a film editor/film maker and I’m now kind of a musician or whatever.” His sister Aja, who helps organise the band, is a journalist.

The fact that Pecknold was hearing a lot of music his father had made whilst growing up coupled with his first foray with file-sharing software gave him the musical ‘itch’. “When I was like 13 or 14 [my dad] brought home a modem from work, you know like a 56k modem, and was like ‘Hey, it’s the internet, check it out’. So we downloaded Napster and one of the first things that we downloaded were the Smile bootlegs for The Beach Boys record, and Bob Dylan.” Add to this school plays and “a lot of community theatre stuff when I was about 8 to 13” and Pecknold had also developed a strong singing voice at a young age. “At the time just through reading books about Brian Wilson and Bob Dylan and seeing how young they where when they started, or were doing these really cool records, I convinced myself at 15 or whatever that if I wanna play music and be okay, I have to start now!”_ At only 22, he’s certainly on track.

Fleet Foxes find themselves going from strength to strength. Enjoying praise from every website, newspaper and magazine their recent (first-ever) UK show, at London’s Hoxton Bar & Kitchen, it appeared as if the entire room was present for them alone. A city under their spell already? The look of bewilderment upon their faces as cheers of familiarity were fired toward the stage during the opening chords to every song was a picture. As the crowd put in a noisy request for an encore (obviously not aware that third-on-the-bill bands don’t do encores) it’s clear that sell-out nights at significantly larger venues are just around the corner for Fleet Foxes.

Find the band on MySpace here. Their self-titled debut album is available (via Bella Union) on iTunes now and in stores on June 16.