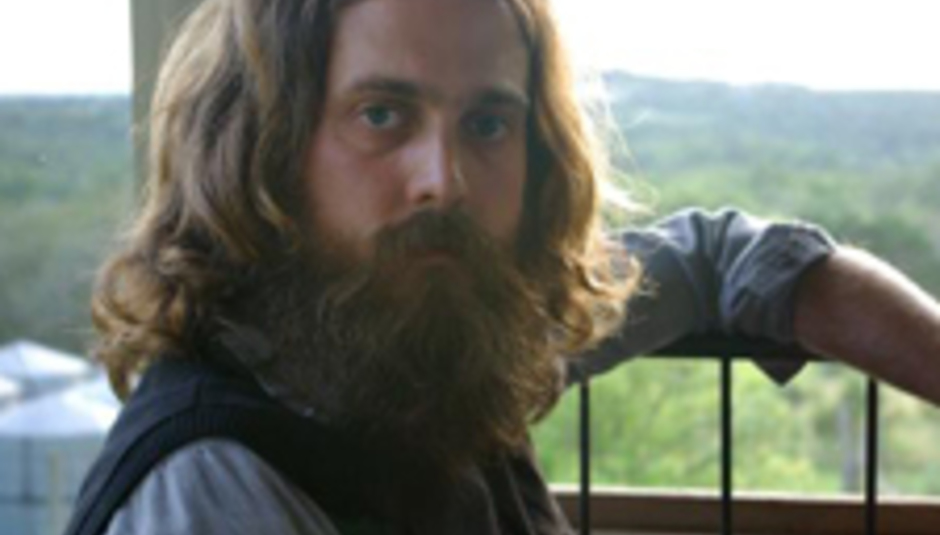 Iron & Wine: "I don’t really do things to rub people the wrong way"

Iron & Wine: "I don’t really do things to rub people the wrong way"

Mr Samuel Beam, a.k.a. that man who induces beard-envy in every young hippy, a.k.a. ‘indie-folk’ act Iron & Wine, started writing songs purely as a hobby whilst working as a cinematography lecturer. A demo happened to fall in the hands of Seattle’s Sub Pop label and the rest, as they say, is history.

Beam recently released his third long player, The Shepherd’s Dog (review) following two EPs (one of which was a collaboration with ‘kings of brass’ Calexico) which signalled a more electric and varied direction to his traditionally acoustic sound.

Tom Milway was able to speak to him, thanks to the advances in mobile telecommunication, all the way from the backstage area of Boston, Massachusetts’ Orpheum Theatre. Whilst the new album represents a further development in Beam’s sound, at its foundations, he tells us, his song writing process hasn’t changed. We question whether this gradual growth of sound is all part of a master plan and talk family, location and what a normal day at the Beam residence involves.

I’m just getting ready to talk to you! So let’s talk.
Alright, okay!

So, you’re touring at the moment?
Yeah, it’s a short tour, about a week and a half. A few dates around the US.

When you are at home, and not touring or doing interviews, what’s the normal daily routine for Sam Beam?
Well you know, the normal kind of thing - gotta get the kids to school, try to work on music when I can. But you know, it gets kinda complicated when you’ve got four!

I bet. How are the family?
Oh they’re doing good, as far as I know. At least I hope they are doing okay.

You mentioned working on music: what is your normal song writing process these days? Has it fundamentally changed since the early days now you’re incorporating a lot more instrumentation and collaboration into your music?
No. Not the beginnings. The beginnings are pretty much the same. I just try to sit in the morning with a cup of coffee, a book and guitar and stuff. But yeah, when it comes time to record I try to stretch out a bit to do stuff I haven’t done before, sometimes.

And I believe you have a studio at home now you’ve moved from Miami?
Yeah, that’s right.

Do you generally spend a bit of time in there everyday?
I try to yeah. I try to treat it like a job and apply a certain discipline to it.

As far as the new album goes, we’ve witnessed a distinct development in your sound since the first two albums, over the two EPs and now on …Dog. Many attribute it to the Calexico collaboration, and you obviously toured with them.
Yep

When you look back, has there been a specific defining point in your mind that’s been the genesis of this change?
Nothing too specific. I’ve definitely just been generally following my interests. Coming out of the Calexico project, it was really beneficial. I mean I did it wanting to stretch out and follow my interest. But I definitely picked up a lot of stuff from them; I mean, how can you not!? They are so talented. So yeah, they kinda go hand in hand really – interests, development, evolution, personal development, whatever and then also influence from other people too.

The Woman King EP, which followed the Our Endless Numbered Days album, was obviously quite different. However it came out before the Calexico In The Reins EP, so there must have been a lot of development going on beforehand. Was that part of the development also natural or did you set out with a purpose in mind?
I don’t really get too specific; I don’t really measure it out. It’s all a pretty intuitive thing to be honest. My rule is usually just ‘you have to try something that you’ve not tried before’ on a record. Just to shake things up for yourself, and hopefully add a little more entertainment value for people. Most of these records I’ve been lucky that it hasn’t just been about doing something different for the sake of doing something different; it’s also been about reflecting what’s been going on in the subject matter of the songs, which has been lucky.

You touched on subject matter at the end there. I noticed that the lyrics on the new album show signs of aggression and resentment, some of which are quite direct. A first for you, it seems…
Right. There are a lot of songs which didn’t make it onto the record that are probably more in line with the older ones. There have been these elements in older songs too and some of those didn’t make it on the old records, so to me it’s not really a first. But yeah, I think this group of songs are definitely more social in context. And in deciding to go that route I ended up doing these kind of surreal portraits of what’s going on. Some of it’s kinda strange and nonsensical. I guess there’s a lot of social confusion at the time, for me nothing seems to be black and white, so it ends up in the songs that way.

How does it come about, in your mind?
I don’t know. I don’t think about it too much. You know, you just live your life and react to what comes up. Whether that be something you’ve seen or heard or read or dreamed about – whatever, really.

You’ve moved around a bit, certainly of late it seems. How does location affect your productivity?
We live about an hour outside of Austin, kinda in the middle of nowhere, so that gives me a lot of space. It’s easy to focus, not a lot of distractions. In fact, the biggest change has just been having the home studio really. Having the freedom to work when I want to, it’s been nice!

As far as working on new music these days are you generally finding you are approaching it still as a solo artist, maybe as you did early on, or are you now thinking about collaboration from the very start?
Well, no it’s still pretty much the former. I’ll just write out a skeleton of a song, but I suppose I do definitely leave it a lot more open these days to experimentation. One of the benefits of working on stuff with the Calexico boys was just finding the pure idea and bringing other people on and feeling their influence and using improvisation, all kinds of stuff. Just leaving room for other people to take part at the same time.

I saw you play a solo show at The Spitz recently and noticed the new songs still sounded interchangeable with the old songs when stripped back.
Yeah. Yeah, that’s right.

As you say, it’s not like you’ve reinvented the wheel, but just because you’ve added more instrumentation a lot of people write about this album as if you have.
I dunno, everybody’s got their own ideas it seems. But yeah I agree with you. Like I said before when you asked me how the writing goes – it’s still the same thing. It’s just when you come to record it you have an endless amount of options to try. I think that’s one of the fun things for me - trying different things. Seeing what works and what doesn’t.

Do you think that in becoming successful you gain confidence to try new things?
I definitely feel open to try anything that is within my interests. Its not that I ever felt scared to do it before, it’s just that I am still learning! (Laughs) I didn’t have the experience required. I was just doing it as a hobby. I just did what I was able to do with what I had. I also did what I felt was most fitting for the songs I was doing at the time, too. In my head they seemed more traditional types of songs, which now I can look at and say, “You can approach them however”, but at the time it seemed to make sense. But yeah I’ve always followed my interests. I’ve never felt much pressure as far as what I felt like I should be doing compared to what I wanted to do. It’s always been the same thing.

That’s pretty convenient, then.
(Laughs) Yeah, I suppose it is!

There seems to be a move away from a traditional verse/chorus/verse song structure on this album. Is there something that has inspired you to create particular songs in particular structures?
I think you have to take it song by song, really. I mean, you know, you’re a writer. You do a lot of editing. It’s just as much about shaping it after you jot down your basic ideas. It just depends – you try to be open and do what the song’s doing and try to take it in a direction that interests you.

One thing I’d like to clear up. You’re well known for singing in a hushed vocal. I’d read somewhere that this came about from often recording late at night and not wanting to wake the family up - which is pretty hilarious. Is this true?
(Laughs) That’s kind of a myth. It’s definitely part of it, but it’s more along the lines of the subject matter of the songs. I felt it was appropriate. But also the limitation of my voice itself, you know… I can’t really belt it out too hard like some people. I felt more interested in what the song was about, or roughly about, and the delivery I felt was important. I also like the idea of a quiet kind of energy. I mean, it could be really energetic, but on a lower level that draws people in. Hopefully it does - it does for me.

This album has gained quite universal acclaim from what I have seen.
Really?

You sound quite surprised by that?
I just do what I do. I mean, I’m glad people like it. That’s the first time I’ve heard someone say people are universally accepting it, but that’s cool and I believe you (Laughs) Or at least I hope you are right. I don’t really keep track; I just kinda do what I do.

Just show up and play kinda thing…
Yeah, but at the same time I hope that people will enjoy it. (Pauses) I don’t really do things to rub people the wrong way.

You are coming over to the UK in November. What can we expect from this tour? I believe it’s a full-band tour?
Yeah it’s a full band. Like an eight-piece band. It’s me and my sister, Sarah. And then the rhythm section: a drummer named Chad Taylor [Chicago Underground/Sea & Cake] and Benny Massarella from Califone, and then the bass player’s name is Matt Lux [Isotope 217]. I stole Paul Niehaus from Calexico for a little while to play pedal steel. Patrick McKinney is still playing with me on guitar and Leroy Bach [ex-Wilco] is playing piano.

The Shepherd’s Dog is out now on Transgressive/Sub Pop and is reviewed here. Sam and his merry band of men and women visit the UK towards the end of October, stopping off at:

This is also rather nice...