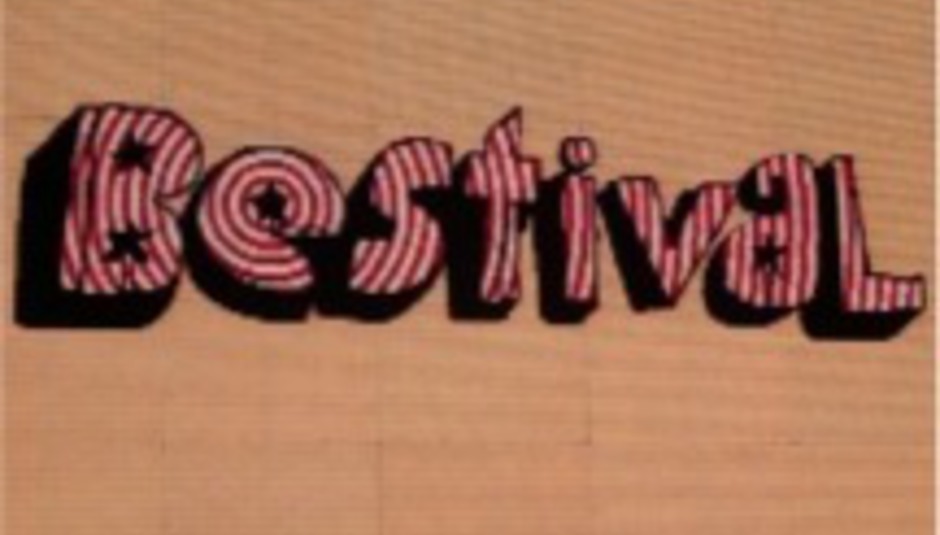 After a gruelling nine (NINE!) hour journey from Old London Town, the first band we’re in time to see is the The Piney Gir Country Roadshow.

Whilst not crotchety from the journey, tempers only frayed during a particularly contentious round of the Alphabet Game, Piney surely would have cheered us up if we were. This is Country at its most palatable, all swirly skirts, slide guitar and sugar-coated bitterness. By the time the sun goes down on the bandstand and their set, an impromptu line-dance has begun, instigated by revellers high on a heady homemade ginger beer and gin concoction. A perfect start to the weekend.

Hailing from New York via the Ukraine, Gogol Bordello are like nothing you’ve seen before. Unless you’ve seen Gonzales fronting a gypsy band from Mad Max, and I’m willing to bet you haven’t. Watching them is akin to watching We Will Rock You, albeit with its tongue firmly in its cheek. Or hell, anyone’s cheek who’s up for it. Whilst an unconventional choice of headliner, Mr da Bank clearly knows what he’s about, as the crowd go stomping-crazy for their gypsy-rock stylings.

Kitty, Daisy and Lewis are three prodigies of bass and acoustic guitar-playing parents - who are also in the band. Yes, they’re good, and yes, they’re beautiful, but they’re also stroppy (past their bedtime perhaps? It’s 12:30am after all), and essentially just play very generic rock and roll. And for heaven’s sake, buy an onstage tuner! Musical credibility is one thing, but making the audience wait for fifteen painful minutes while you try to tune by ear and then play out of tune anyway is quite another.

King Creosote’s sunshiny power-folk is the best way to slide into a warm Saturday afternoon. They even include a cover of The Aliens' ‘The Happy Song’, the chorus of which perfectly sums up the mood of the day: “Happy, happy, happy, happy, happy…” you get the idea.

Then along come Guillemots to cast a pall on the proceedings. On the radio, they come across as a fun, albeit slightly bland, indie group. On stage, there is no consistency, the moody singer looks like he trained at the Italia Conti school, and there are odd musical intervals that seem to be there purely for the sake of weirdness.

Still, they're nowhere near as bad as Richard Taha Band with Brian Eno. Total shit. Imagine World Music, but with all joie de vive removed, and some totally unnecessary Sanata-esque guitar wanking and you’re still nowhere near how totally bollocks this is.

Thank goodness for Pet Shop Boys. “This is the first festival I’ve been to where the crowd’s better dressed than I am”, remarks Neil Tenant at the culmination of a glorious opening of ballet, fake Neils and Chrises, and the kind of spectacle that Fisherspooner only wish they could provide. This charm permeates the whole set. ‘Always On My Mind’ is the first real, hands in the air, this-is-why-I-liked-them-as-a-kid sing-along, and when ‘West End Girls’ comes hot on its heels, the crowd roaring reaches 'Wonderwall' levels. Albeit vastly cooler, for being so uncool. Yes, that’s right.

The Stranglers' set is okay, but ’Duchess’ brings on a feeling, unshakeable for the rest of their set, that they really just sound like a mid-90s indie band. This is testament to their influence, of course, but leads one to believe that they‘re no longer really relevant today.

Guilty Pleasures however, are perfect between-band fodder for today! If there’s anything more fun than dancing to 'Flashdance' in the sunshine, whilst giant Scrabble players form the words ‘BESTIVAL’ and ‘SEX’ in front of the stage, I have yet to experience it.

Until Hot Chip. From their endearing count ins, (“1, 2, 3, go”) to playschool break-beats and Atari sounds, via electrifying guitar and drawling Neil Tenant vocals, this set is GENIUS from beginning to end. ‘Over and Over’ is the massive, crowd-pleasing climax to what is undoubtedly the set of the weekend.

Especially when I see Devendra Banhart. Uninspiring space folk. Like Kula Shaker, without the presence. In total 1990s contrast, the bouncy-pop of The Holloways owes more than a passing debt to Supergrass, but provides perfect sunny afternoon, danceable fare.

On paper, Scissor Sisters are an ideal festival-closing act: all dancing, and fun, and just a little bit of cheek. In reality: awful. Almost irredeemably so. Set opener ‘Laura’ chuggs along without any of the sense of exuberance for which the band used to be famed, and from then on in it’s only downhill. “I hope you saved some pills for tonight”, screeches Jake. “Yeah, this one’s for the gurners”, chimes Ana Matronic, but it’s about as uncomfortable as a stand-up at a Student Union gig talking about the munchies.

When they go off stage before the inevitable encore, a wag in the crowd heckles, “Come on, you’ve got 20 minutes yet”, and it really does feel that formulaic. From being an edgy, slightly outré act, the ‘Sisters have transformed into a Vegas Cabaret band. One who’ve played the same set, twice nightly, for the last two years. And all the fun is gone.

All their fun that is, because although they’re done for the night, Bestival is far from over. Now, who remembers the way to the inflatable church?