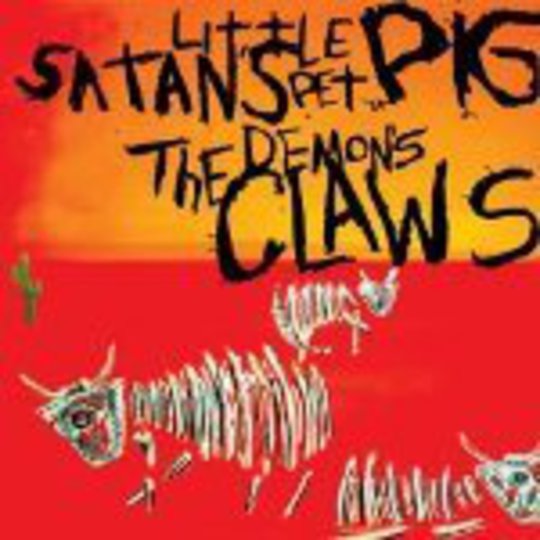 Brought to the attention of Los Angeles-based punk label In The Red by their previous employees Black Lips, now signed to Vice, Demon’s Claws are a Montreal-based quintet making rock ‘n’ roll from another time. This, their debut long-player (we think!), is a collection of songs that sound smashed to fuck. Take a warped seven-inch out of your father’s loft and drag it behind a bicycle three times around the block before going at it with a Phillips Head. Now stick it on the turntable. In an inaccurate nutshell, that is the sound of Demon’s Claws.

As such, it’s hard to know exactly what to make of Satan’s Little Pet Pig. It’s so raw its red through to the bone; the songs are basic of structure but brimming with spirit; and the production’s so rough about the edges it’s a fucking wonder that any words whatsoever can be plucked out, discernibly, from the fug of foot-stamping adrenaline rock that makes up songs one ‘til twelve. All of these factors receive a high-five from this writer, but in the context of everything rock ‘n’ roll today, what the fuck is the Average Joe meant to make of songs like ‘1,000 Rounds’, which might well have been taped onto a boombox in a squat kitchen in downtown San Francisco in 1965 for all anyone can tell from its sound. ‘That Old Outlaw’, meanwhile, comes on like a blouson-shirted Jagger tripping over a damn drunk Dylan in a London back alley in the late ‘60s, with the pair deciding to jam out some harmonica-flavoured swagger rock ‘til sun up.

Live, this would make sense – In The Red signed the five-piece following their first-ever LA show, and they’re a label that knows their beans – but on record, on CD, it’s just weird. With added crackle and snap the treble-y tracks would sound right, but when uploaded onto a portable music-playing device of choice – and we’re talking mp3s now, kids – it’s just, well, it is weird.

Good weird, though; retro weird that’s been locked in a time capsule for thirty years or so. Take your mind to another dimension and sling this on and you’ll be feeling flower power punk down your pants for a half-hour. Stay sober as a judge while Demon’s Claws entertain you and prepare to be puzzled into relative indifference.