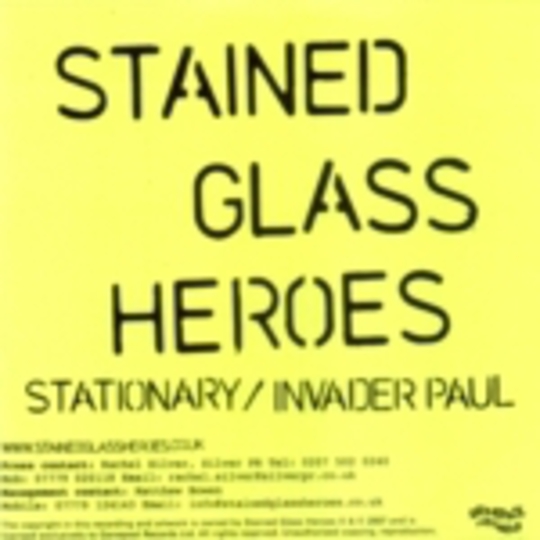 You’d expect a band with a drummer called Tagistani Collinparker Rentman Bubble & Squeak to be slightly out of the ordinary, and Stained Glass Heroes seem to be doing their darnedest not to disappoint: the AA-sided ‘Stationary / Invader Paul’ is one part ‘80s-style electro and one part poetic art-school meanderings.

The former is a robotic electro number with guitars, synths and a tinny drum sound, whilst ‘Invader Paul’ begins life with a sinister guitar riff over rumbles of thunder before switching suddenly to simply-constructed lo-fi art-rock with Butler half singing, half mouthing-off. Mixed high throughout, his half-shouting, half out-of-tune singing will doubtless divide opinion, especially on the second track.

From this description it might sound unappealing – and on first listen it probably will be – but after a while little chinks of light shine through. The guitar part at the end of the chorus for ‘Invader Paul’, for instance, complements the vocal line near-perfectly, before returning to its thumping, mundane verse. Perhaps all this would be better with higher production values, as the lo-fi approach doesn’t flatter the Heroes’ sound in any way, leaving them sounding a little too sparse and disjointed.

But maybe the problem is that the ‘80s was an era which many consider to be a musical wasteland best left alone. On the evidence of ‘Stationary’ / ‘Invader Paul’ you’d be hard pushed to argue otherwise, despite its few praiseworthy twists.

I Know What You're Doing Tonight