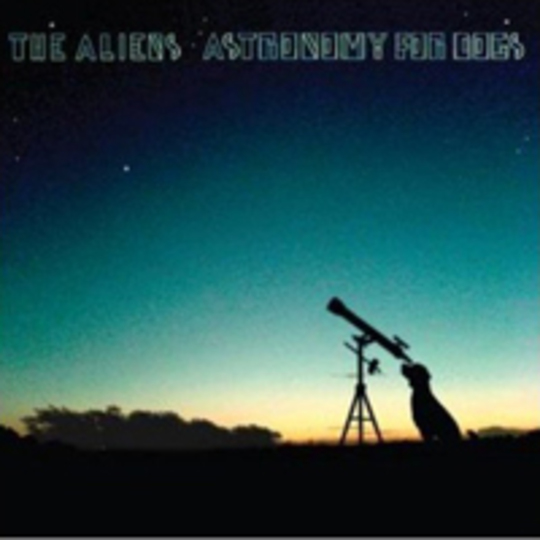 As founder of The Beta Band in 1996, Gordon Anderson, rather than enjoy the praise lavished upon the band for their washed lo-fi psychedelia, spent the subsequent decade struggling with psychiatric illness while only enjoying sporadic solo flights as Lone Pigeon. After seizing John Maclean and Robin Jones from the now defunct Fife four-piece, Anderson now leads The Aliens out for their debut long-player, only to herald those ever-so-familiar influences.

Whilst the standard music monthly’s have lauded recent standalone offering 'Setting Sun' as blissful 1960s drenched rock, it sounds like classic Clapton. Make of that what you will. Bold and pompous, this romp-rock opener has an immediate familiarity but underlines the principle fault with the record in its lack of possessing anything unique. Four minutes into the dragged-out five, a few verses of “We are The Aliens” are roused. This is a familiar feature throughout the album, typically signalling the demise of having anything left to say, but a determination not to let the track end.

This unfortunately sets the standard for much of the album: it’s technically sound but has little going on in terms of inspiration. Preceding this is a bout of Steely Dan psychedelic funk in 'Robot Man', a track with a fine attention to detail but ultimately dull. Suddenly, midway through, applying the same twisted logic The Beta Band used to employ, a classic Lennon/McCartney harmony kicks in. All but immediately it’s gone, as we arrive back to the seedy funk and repeat-to-fade, hardly anthemic, mumblings of "I am the Robot Man".

Other than the Roy Orbison croon of ‘Tomorrow’, for an artist well documented as having penned over 10,000 songs Anderson too often lets the occasional moments of true quality songwriting peter out. The Aliens have failed to hone themselves, and each track fails to sit coherently next to one another. One minute, it is the numbskull, Screamadelica-era Primal Scream, baggy beats of 'Rox'; the next it is the violin-ridden, Goodbye Yellow Brick Road-era Elton John, love-loss of 'She Don’t Love Me No More'.

Again changing tact, 'The Happy Song' has the same eccentric and gleeful bounce that the Super Furry Animals have mastered for so long. But whereas Gruff Rhys often twists this into blissful pop moments, Anderson instead makes it sound all a little manic. It’s relentless rather than effortless.

Although The Beta Band far from limited themselves to a coherent batch of influences, they applied them tastefully. Ultimately, this is an album lacking in that essential quality control. As a record so outwardly yearning for mainstream appeal, this lack of constraint is its most prominent downfall. Running in at well over an hour in total, the record’s 16-minute closing track ‘Caravan’ appears to be the hodgepodge of ideas left over, only acting to make the whole less digestible. Though occasional glimpses of that trademark Beta Band brilliance appear, Astronomy For Dogs fails to act as much more than a reminder to listen to Anderson and company’s former glories.