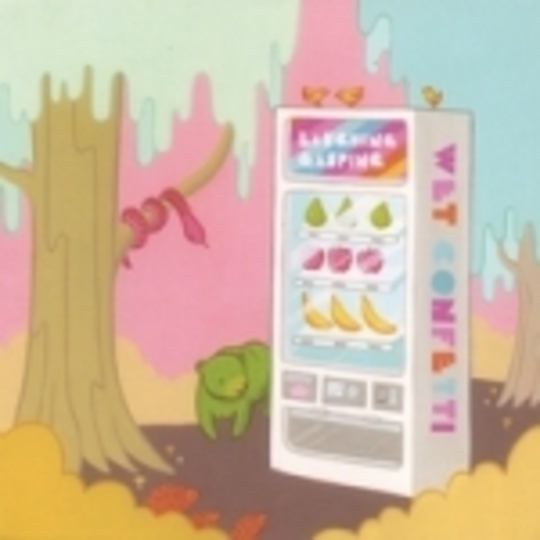 I need to hear another Gang Of Four-ish band like I need to eat a used, scab-flecked bandaide or pass a golfball-sized shard of Kryptonite-esque calcium through my urethra. Then again, I recently said the exact same thing about post-rock (substitute ‘Gang Of Four-ish band’ with ‘Mogwai-ish band’) recently only to have Explosions In The Sky put one over on me with their tasty new record. So let’s start again: my prejudices aside, Wet Confetti’s Laughing Gasping is about as good as a record with said influences is going to get. AND, considering that it’s produced by none other than fellow GO4 foreman Dave Allen, it’d be a bit spurious to overdo the comparison game. WC aren’t any more indebted to everyone’s favorite Gang than a litany of other, mostly lesser, bands, so I’ll just let it go...

Besides, there are several other elements tacked on to Wet Confetti’s sound like charges on a cell-phone bill. We get the standard smattering of synth-speak, thankfully used in more of a rhythmic manner than usual, and Alberta Poon jabs her voice at the listener much like Kazu Makino, especially when the guitar squeals match her restrained coo bit for bit. This trick is employed far too much, however, and it doesn’t allow the listener to simply enjoy Poon’s tones and words.

But that’s not the biggest problem here. What limits the trio the most are, tight tracks like ‘Take My Advice’ and ‘Make an Offer’ notwithstanding, the bass lines, which sort of plunk along at times, especially when the exterior diversions are peeled back and only the low end chugs along. Not surprisingly, Poon also plays bass (natch: so does Makino in Blonde Redhead), her double-duty a likely culprit where her limited diddling is concerned.

So, as Poon purrs on ‘Marine Snow’, “was it any good, from where you stood?” Sure poonanny, it actually wasn’t half-bad, and thanks for asking! And you’ll be happy to know that the extra boost of the tenth and finest track ups the ante to a ‘6’. But you got off easy this time! Crank out the same record again and again and see what happens. GO AHEAD, see what happens!

The Fratellis, The Enemy at Rock City, Nottingham, Sat 17 Feb