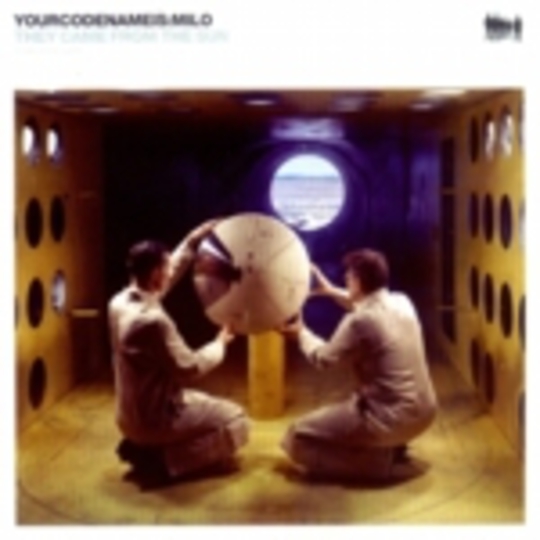 If you were a smart gambler, would you put money on yourcodenameis:milo making a good album? Their first attempt, 2005's Ignoto, proved to be so intricate and ambitious that a lot of fans, myself included, just couldn’t get to grips with it, especially after the promise of math-pop excellence from preceding mini-album All Roads To Fault. So with They Came From The Sun comes a chance to get it right second time.

And they have, sort of. They Came From The Sun marries the intricacies of their previous work – uncommon time signatures, drums which change timing whilst the rest of the band stay constant and vice-versa – with choruses to match their more accessible moments and a myriad of different styles to satisfy most parties. Opener ‘Pacific Theatre’ does its best to cater for anyone and everyone with a Seventies-style rock-out pitched somewhere between Wolfmother, The Raconteurs and Led Zeppelin with high-chorused vocals for a touch of Jane’s Addiction, whilst second track ‘All That Was Missing’ will appeal to the more radio-friendly listeners; it’s a slow, standard rock number.

Wait, a ‘standard rock number’ from yourcodenameis:milo? It seems we’re dealing with a different band to the one whose debut was so off-the-wall. They Came From The Sun is controlled, content to slowly build up and ration the noise in favour of something slightly softer. Even recent single ‘Understand’ had more of The Killers about it than At The Drive-In, with its electro-edged vocals drenched in an echoing reverb, and later on ‘About Leaving’ is practically electro-pop.

Rest assured, normal (loud) service is resumed in due course, but even then the throat-scraping, testicle-shattering post-hardcore yells are rarely heard, Paul Mullen often opting for a raised voice instead whenever all hell breaks loose. It’s a shame in some ways, as the one time Mullen does kick his voice into top gear, it makes for one of the album’s highlights. ‘Evening’ begins with a low-slung riff reminiscent of Superunknown-era Soundgarden which builds into a beat-driven wailing chorus and eventually becomes the kind of ultra-heavy half-speed breakdown that this album needed from the very beginning. Somewhere, sometime, a moshpit virgin will be head-butted to this. It’ll make their day.

Regardless of what you make of the delivery, They Came From The Sun still impresses for the most part, but still there’s a lingering feeling that this album maybe isn't all it could have been. At times it goes out of its way to stun you with melody and technical merit, but at others it’s content to just kick back and stick to what it knows. Still, the constant variation of styles that each song draws from and the flawless transition from track to track means the pros will far outweigh any cons in most ears. This is an intelligent, convincing body of work from a band who are still evolving.