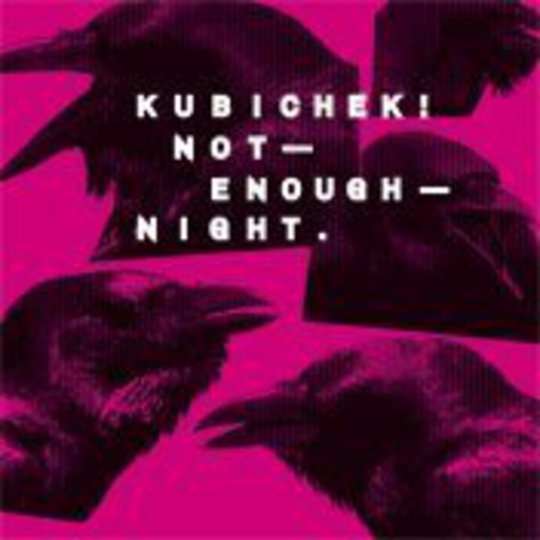 Kubichek! know more than most what a hard-knock life it really can be. Having emerged out of the same Tyne & Wear scene that spawned the likes of Maximo Park, The Futureheads and Field Music a good few years ago, the smart money was on them to make the step up to commercial mainstream success at any moment.

Add to that a clutch of brilliant - make that flawless - singles ('Nightjoy' and 'Taxi') and it really was impossible to see where things could go wrong from hereon in.

Of course no one had bargained for the unwarranted intervention of record industry politics, and after several aborted attempts to get a full-time record deal Kubichek! seemed to slip out of sight while other less-deserving contemporaries found themselves elevated to primetime radio and MTV slots and frontpage headlines without any tunes or charisma worth speaking of.

So if the good ship Kubichek! was to find itself back afloat on steadier waters, it was going to need a bit of tweaking and some incisive decision making to get itself up and running alongside the rest of the competition.

The first decision was the one to go back to basics, or in this case, forget the major labels with their empty words and hollow contracts and sign to relatively unknown indie 30:30.

Secondly, employing producer extraordinaire Dave Eringa to twiddle the knobs and press the buttons was a masterstroke, not only because it gave the band the confidence to record the album everyone who heard that first Fantastic Plastic seven-inch back in 2005 believed they were capable of, but also because Not Enough Night isn't just A.N. Other indie record. No, this little beauty rocks hard, baby, and then some.

Comprising twelve tracks in total (or 11 if you omit the 30-second intro, 'Searchers'), Not Enough Night is the perfect accompaniment to a big night out, a quiet evening in, splitting up and getting back together with your partner, telling your boss to stuff his job where the sun don't shine and more besides.

It's actually hard to envisage whether Kubichek! cracked a smile during the recording of the album as the jagged tinge of bitterness that sweeps through even the more positive songs on Not Enough Night is evident by the bucket load. In fact, you can almost imagine the band geeing themselves up in the studio like Custer riding through Montana for that last fatal push. This is it lads, or else...

Well, right from the off, Not Enough Night hits the spot, 'Roman Is Better' quickly segueing into the double whammy of 'Taxi' and 'Nightjoy', both re-recorded with added layers of guitar and audible backing vocals that make the latter feel like a chant in waiting for the Gallowgate End on a cold Wednesday in November.

One thing about Kubichek! though is that just when you expect a no-holds-barred, 70mph charge, they anchor up with the charisma of Sigur Rós and offer a tremolo-baked slice of melancholia that is 'Hope Is Impossible'. It's a welcome respite from the vitriolic fury their live shows project and shows a depth to the band many people may not have previously noticed.

Omnipresent throughout, and something Kubichek! seem to have found their niche in decimating, is the myth that smalltown life is close-knit and comfortable and superior to city living, hence the brace of 'Stutter' and 'Hometown Strategies', which sees the good cop/bad cop vocal exchanges of Al McDonald and Mark Nelson explode ("You could have had almost anything, but you threw it away..."), simmer, regroup and then finally share the same vision ("...remove your hometown!"), like a couple of town planners overseeing the death of Hartlepool. Or somewhere equally as revolting.

The highlight of the record is undoubtedly the five-minutes-plus opus that is 'Start As We Mean To', a song that opens like a sequel to a A Storm In Heaven-era Verve track, which explodes in the sky and shoots an excitingly mesmerising proliferation of musical collages through an already wondrous record. It is quite simply one of the most stunning pieces of music these ears have had the honour to be engaged by this year, and quite frankly dispels any myths (should they be remaining) that Kubichek! are one-trick Geordie ponies.

As albums go, Not Enough Night doesn't just live up to expectations, it goes far and beyond anything that the doubters who were writing this band off less than a year ago could ever have dreamt of. It’s as near to perfect as you can get without ever resorting to self-indulgence, and a return which will surely result in the long-overdue success Kubichek! deserve.