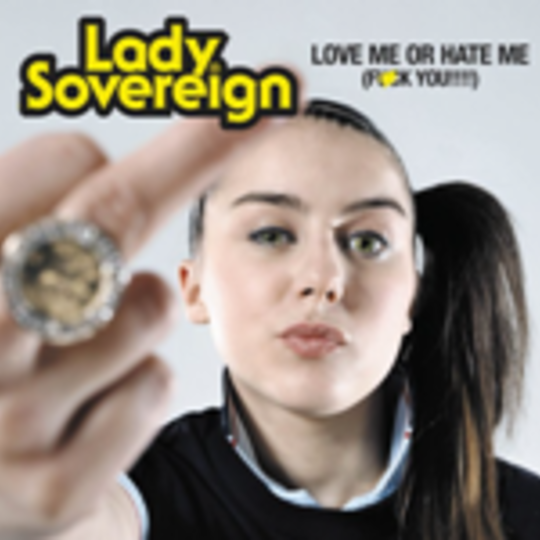 The petite girl born Louise Harman in 1985 has done her fair share of growing up these last twelve months: a bone-fide star in the making stateside, thanks in no small measure to the incredible influence of Jay-Z, the Wembley-born MC now faces an uphill struggle as she attempts to convince critics here that she’s 4Real. It’s interesting that her debut album, Public Warning, received a US release in October while the British public have to wait ‘til next month: it’s almost as if the Powers That Be have already decided that Lady Sovereign isn’t to limey tastes.

‘Love Me Or Hate Me’ isn’t, it must be stressed, a particularly good track to showcase said album with: Public Warning contains many a highlight, trust me, and this computer bleep-aided rant about polarised opinions on her spits and skits isn’t really one of them. Taking pot-shots at easy targets – neatly-preened pop princesses, polite prudes and champagne-swilling above-their-station sorts – while simultaneously stating why the artist in question is so_ different to those he or she despises for all their falseness is a rap technique done to absolute death, and Sov’ brings little freshness to the approach. That said, humorous lines about her _“non-existent bum” and the death of her hamster are endearing, and her raps are so rooted in realism that listeners of a similar age will find much to relate to here.

The most interesting aspect of this song though is, bizarrely, a barefaced nod to prog-rock dinosaurs Genesis: “I can’t dance, and I can’t sing,” slurs Harman towards the track’s finale, directly referencing the Phil Collins-fronted group’s ‘I Can’t Dance’ single of 1992. Mental.

And for that unprecedented absurdity alone, interest in Sov’ is guaranteed ‘til the domestic release of her long-player at least.