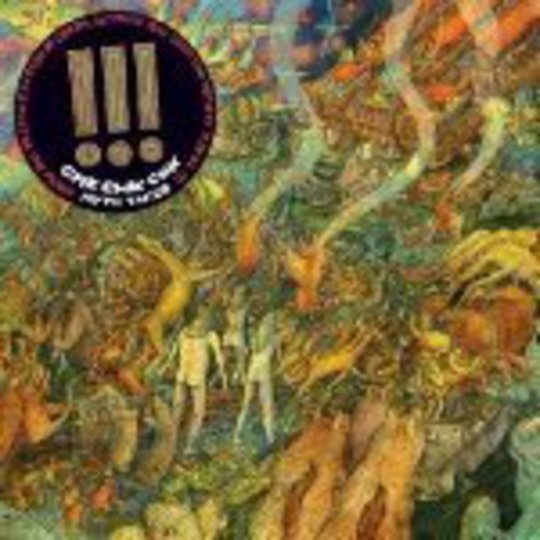 Here it is, then: the soundtrack to your summer house party par excellence, signed, sealed and delivered a good few months early just ‘cause it’s that good. Get your dancing practice in now – come the longest days of the year you’ll be wearing many a sole down to Myth Takes.

!!!’s third long-play release – their second for Warp, very much a label of the moment what with the forthcomings from Maximo Park and Battles – is their best yet: it’s multi-faceted like no release before it (from the band’s catalogue), and each and every nuance is super funky. Yes, the word’s permitted here. Just don’t go dressing it up with ‘punk’ prefixes.

The album’s opening trio – the title track, into the effortlessly effervescent ‘All My Heroes Are Weirdos’, into the super disco stomp of ‘Must Be The Moon’ – are, in all probability, unlikely to be bettered this year so far as future dance-rock crossover releases go. The three songs set a fantastic tone – one of arm-waving, hand-clapping, toe-tapping exuberance – that fails to relent for the duration. You’ll be sitting on the bus, in front of the telly, on a park bench, at your mother-in-law’s, it doesn’t matter – you’ll dance to these songs like you’ve never danced to any band with guitars – gasp! – before. Pump the first ten minutes of Myth Takes into any club in the country, in any backwater town full of squaddie fucks and fuck-about forty-somethings, and the floor will go crazy.

And it just gets better, unexpectedly and brilliantly: lead single ‘Heart Of Hearts’ sits neatly at five of ten, throbbing aggressively and seductively at the centre of this intoxicating album. The purest dance song on this collection, the interaction between the male and female vocals lend the song an air of Prince circa being good trying his hand at Euro House, or whatevertheshit makes the top ten week in week out without the likes of this writer hearing it. Y’know, the stuff sold as ring tones to those same inbred sorts busting a million moves a second a paragraph earlier. But this you know – the song’s out, available, and if you’re smart you’ve already got it.

What you won’t have yet – unless you’ve picked this album up as soon as it was released (t’other day) – is ‘Bend Over Beethoven’. This eight-minute workout of strut-funk bass lines and crisp beats doesn’t outstay its welcome despite that intimidating count on the clock, and as vocals fade in and out over drifting guitars and skittered percussion you can feel something welling within, and then POP!(!!) The dam’s down, the valley’s flooded, you’re on your chair grinding against an invisible partner for every passer-by to stare at. They’re not embarrassed for you, though; they want to be you.

That being the case, they’re advised to collect this from their local record store and report back to you around July time, when we can all dance in unison to what will, come December, be recognised as the year’s finest album of its kind.