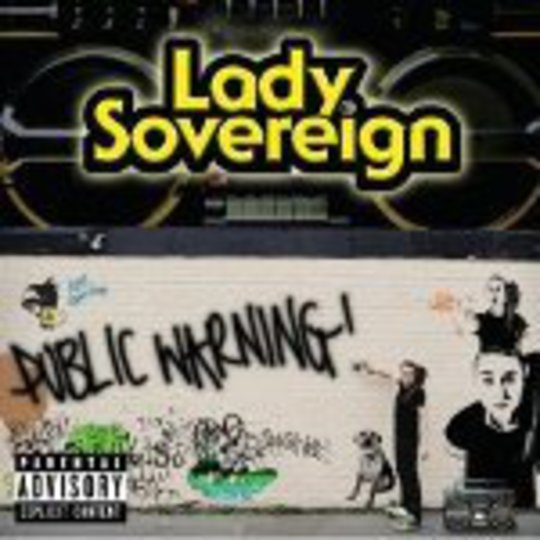 “I see your first priorities are discussing me in Maccy D’s at about half-three.”

So begins ‘Blah Blah’, one of the standouts on Lady Sovereign’s long-time-coming debut album Public Warning; it, like other highlights ‘9 to 5’, ‘Hoodie’ and the magnificently bitchy ‘Tango’, has already done the rounds commercially and critically, a trait that lends this lengthy LP a sense of déjà vu. Anyone with ears hovering as much as six inches above the grimy ground Sov steps upon day in day out will have heard this album’s bona-fide ‘bangers’ a good many times already. That’s no bad thing, mind, and they are surrounded by quality.

Louise Harman – for that is the name sewn into Sov’s P.E. shorts – demonstrates throughout this 13-track collection that she’s a totally capable MC, and many a thumbs-up above the cartoon rapper some have her boxed as. ‘Random’ rides on a truly filthy bass line as Sov spits “Smoking kills and so do my lyrics… you wanna test me, then bring it on”, and for the most part she possesses the aggressive confidence to meet any challenge the critic can present her with. Tongue-twisting super-speed couplets? Check out the title track and fall over dizzied by Harman’s rapid-fire reworking of Peter Piper while Experience-era Prodigy beats fizz and pop behind her potty-mouthed prose. The gritty realism necessary for any contemporary band of the people? Take a listen to ‘My England’, which neatly states for the record that “we don’t all wear bowler hats and hire servants”.

It’s the above-mentioned critique of the nation’s unseen-by-tourists underbelly that allows comparisons to be made between Public Warning and Bloc Party’s A Weekend In The City; both are released in the same week. While Kele Okereke’s lyrics focus on the frustration and paranoia of being a twenty-something in a city that never sleeps, Harman’s observations perfectly reflect the day-to-day comings and goings of teenagers the country over; although the songs’ protagonist is London-born and based, lyrics are relevant to the under-aged of all counties. ‘Gatheration’ is the Friday night parents-away house party track; ‘Hoodie’ accurately dissects the media’s wrongful vilification of individuals sporting the titular garment; and ‘Those Were The Days’ is a wonderfully nostalgic trip down a relatively short memory lane – “remember Naf Naf jackets and Spliffy jeans?” – that every listener aged 15 to 25 should relate to.

With solid production throughout, there’s little to slight Public Warning besides Sov’s hang-up with her diminutive physical stature. Repeated claims that she’s “the biggest midget in the game” grate terribly, especially as she asks the listener not to “joke with us small folk” on ‘A Little Bit Of Shhh’, and an awkward and insincere braggadocio punctures a handful of tracks. When her tongue’s in cheek and her rhymes amuse, Lady Sovereign is hugely entertaining. But when her head’s over-inflated by an unnecessary stroking of a usually in check ego, Harman loses perspective and, consequentially, the listener’s attention.

Public Warning isn’t an unmitigated success, then, but so far as pop-hooked rap albums bathing in early ‘90s rave beats and air-raid sirens go, it’ll probably be the finest release of its kind heard in 2007. Expect it to be discussed in public places far finer than the nation’s burger emporium of choice.

What Would Steve Do?