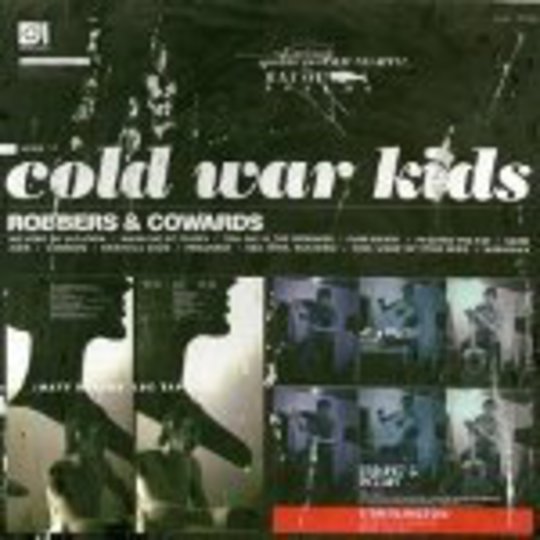 There’s been much said about Cold War Kids in recent months, with many – these fair pages included – tipping them as ones to watch this year. Yet, while Robbers & Cowards does offer much to admire, it’s ultimately a somewhat disappointing record that promises more than it delivers.

The album’s constituent parts are certainly impressive. Nathan Willett’s remarkable vocals steal the show right from the get-go. His is a soulful voice of massive power and striking tone, inviting comparisons with Jeff Buckley, Jack White and, on occasion, Josh Pearson. The band wisely choose not to out-muscle the vocals, instead deftly counter-pointing them with inventive arrangements that are way ahead of their peers. For instance, ‘Tell Me In The Morning’ is based around a Strokes-ish guitar line, yet the guitar manages to pull the song in an entirely different direction from Casablancas’ crew.

Yet this track is one of too many on the record which demonstrate the band’s main problem. Despite the appetising ingredients, the song is actually no more than mildly palatable, and, to extend the culinary metaphor, once it’s over one is left unconvinced of its nutritional value and even slightly puzzled as to why it was cooked up in the first place. Even the recent single ‘Hang Me Up To Dry’ is guilty of this to an extent – and it’s the most obvious stand-alone tune on the album.

In fact, it’s the less obvious tracks which work best. ‘Robbers’, for example, is deceptively claustrophobic, its creeping anxiety eventually getting the better of the vocal line as it degenerates into a wordless cry of anguish. The eerie twisted folk of ‘Pregnant’ is intriguing, too, with the dual falsetto vocals and distant echoes of a public address system creating a pleasingly unnerving experience.

The band meet a further stumbling block with Willett’s fondness for picking out characters to examine as lyrical subject matter. His treatments of the drunk in ‘We Used To Vacation’ and the invalid in ‘Hospital Beds’, for example, are hugely unsatisfying, merely rattling through their most obvious thoughts and feelings when a more rigorous study of their individual conflicts and idiosyncrasies would have been infinitely more rewarding. It’s especially disappointing because it goes against the genuine sense of ambition that pervades the record. It just serves to emphasize that Cold War Kids are not yet the complete package.

It’s understandable why there’s been so much recent excitement about the band – their striking vocals, their refreshing arrangements, their genre-mangling vision – yet Robbers & Cowards baldly exposes their critical lack of tunes. One’s left with the feeling that these four men have it in their power to produce something rather special, but unfortunately Robbers & Cowards isn’t it.