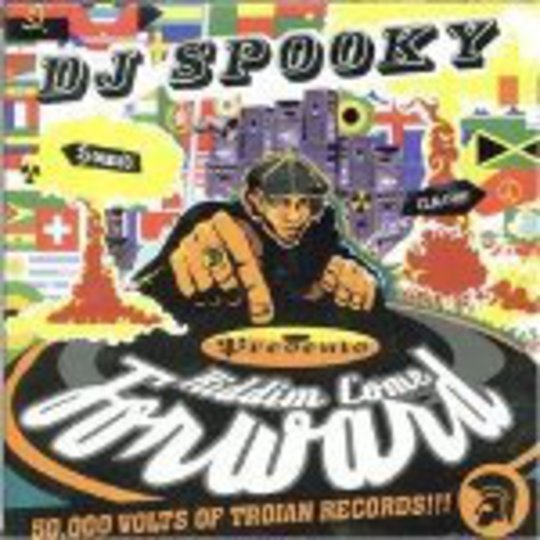 It is a source of constant wonder that Trojan Records continues to eternally relish the task of finding something new and refreshing in their dank reggae vaults. This (*checks CD again to make sure*) 72-track collection of luminous gemstones from yesteryear is given, on disc one, the DJ Spooky treatment, which basically means an awful lot of scratchy noises over the top of some rather impeccable not-quite-standards.

The most rewarding moments come, it has to be said, when Mr Spooky's distracting magical Kid Koala-esque fingers, intriguing and dextrous as they are, stop skipping all over the decks and we're allowed to just enjoy a slice of lie-down bump and grinding. And what grinding it is! For example, The Survivors' version of the theme from 'Rawhide' is taken down to a light and lazy rumble, and The Specials' 'Ghost Town' is ballsier, more dangerous and plain exhilarating in the live version we're presented with here.

These jewels are not the only the only ones worth listening out for, as there's a simply massive range of roots, dancehall, big-band (Glenn Miller for Chrissakes!), dub, reggae and even the odd slice of girl-group luminescence to oil the wheels in the shape of Millie Small's 'My Boy Lollipop'. Disc 1 count: 45 tracks. That's a lot of relaxing. Pop in disc 2 and, thankfully, DJ Spooky has taken his leave, allowing us to just listen to the songs without all his silly noodlings over the top. The thoroughly exhaustive and, for once, rather entertaining sleevenotes make explicit reference to the importance of the role of the DJ in its original format – the selecta was God and his choices are paramount.

In keeping with that spirit, the choices assembled on this compilation are undoubtedly engaging and varied, but one can't help but be transported mentally to one of those awful head shops in Camden Town, such is the melee of intriguing grooves and trip-ups thrust toward you like a bong at a 15 year-old Green Day fan. Dennis Alcapone's 'DJ's Choice' is pure Müller Yoghurt commercial fodder but still refreshingly buoyant, Owen Gray's 'Can I Get A Witness' bobs fluidly across the floor like the crystalline dance moves of Sammy Davis Jr, and the heroic Desmond Dekker flattens everyone with his inimitable syncopations and pleasingly disjointed delivery on 'I've Got The Blues'. In a fashion not dissimilar from the John Peel programme, you basically can't go more than a few tracks without finding something pleasantly surprising. Disc 2 count: 27 tracks. That's a lot of shimmying.

An exhausting and invigorating compilation, then, stifled only by its selecta's busy fingers and the crushing fact that if you play this to any ignorant adolescent then they'll love it because they think they're on drugs. Pointless snobbery and speculation, yes, but it's a factor. Apart from that, its breadth and diversity will encourage Trojan newcomers to get their hands dirty, dispelling any kind of myth that they're just a reggae label.