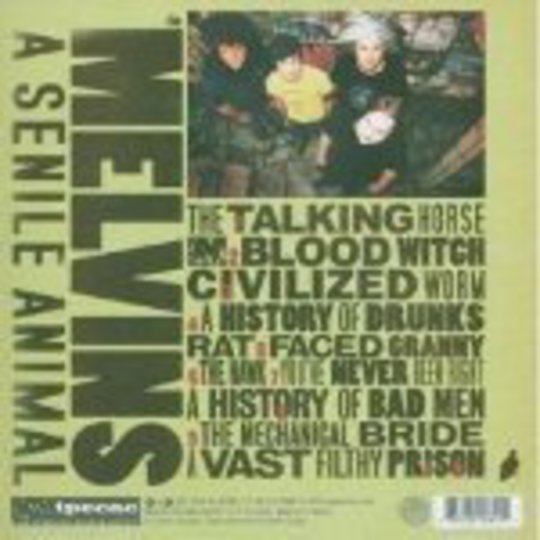 How wonderfully appropriate an album title for the woolly mammoths of sludgy, seedy, grainy, gaudy, rolly, polly, stingy, syrup-y metal that keeps on going... going... going long past a date where anyone but their true fans would be paying attention. Thing is, The Melvins have built quite a following over the years. From scratch, no less; they were dropped by the only major that even bothered to return their phone calls almost a decade ago, and they’ve never been promoted with even a fraction of the zest shown by flackies hocking the latest Radio 4 record.

Luckily for The Melvins, their influence has spread wider than a pterodactyl’s wingspan. The herd of bands co-opting their doom-rock blueprint alone numbers in the dozens: Boris, early Pelican, Isis, Sleep, Khanate, and those are just the ones you’ve heard of! In other words, short of raising your devil horns to the sky and snapping off a loving salute, you should at least casually acknowledge the accomplishments of this dirt-dog trio, the only band from the grunge debacle still standing (no, the reunited Alice In Chains do NOT count).

_ A Senile Animal_ isn’t exactly a brand-new take on The Melvins’ sound. 'A History of Bad Men', for starters, clips note-for-note a bassline from Houdini (research that one yourself and report back to DiS). Other instances of self-thievery pop up just when you think you’re safe from derivatives, but the addition of two temporary members — Jared Warren, bass, and drummer Coady Willis, both from Big Business — adds muscle to the beefiest broth this side of old Sabbath. We’re treated to fuller flams, heartier fills, burlier bass and juicier jams, and with that The Melvins sound revitalized to some degree despite the fact that A Senile Animal is awfully close to older work, closer than they’ve dared venture since... maybe ever.

Don’t let that besmirch your enjoyment of this record, however. It’s probable that many have been waiting for a ‘return to form’ since the wriggling scanners and electrodes of Hostile Ambient Takeover or maybe even the confusing — but ultimately brilliant and underrated — hot-cold dash of Honky. No dilly-dallying to be found here; this is Senior Melvin at his snottiest, most direct and most UN-tactile. And the double-drumming? Genius! Dale Crover is a flailing force on his own, but joining sticks with Willis unleashes a new superbeing, flexible as a contortionist and thick-wristed as an arm-wrestling champ. Not to mention that the drum solo at the end of 'Civilized Worm' sounds like hundreds of percussionists raining down on their tom-toms in tribute...

King Buzzo? He’s still the same: Ratty, gray-afro’d, and sounding mildly pissed off. His riffs of melted molasses aren’t as ominous as the out-and-out drudgery of the 'Boris' days; the post-millenium Buzzo is much more suited to toying with strange time signatures, diddling with electronic knick-knacks (though few are found here) and indulging in side projects including Fantomas and Poison Idea tribute Venemous Concept. His return to the newly refurbished Mothership Melvins is his best move yet, however. Although A Senile Animal isn’t the trombone-tooting thrill_ Stag _was, it continues that album’s wrath of distortion admirably, a barebones effort that stands up high next to the daunting totem-pole that is The Melvins’ discography.

In lieu of live albums and collaborations aplenty, A Senile Animal couldn’t have snarled to life at a better time.

The Art Of Fiction