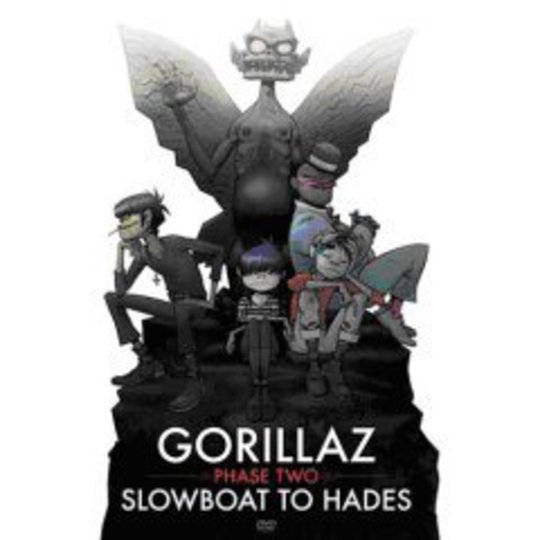 Gorillaz’s second video-and-extras-collecting DVD release – the follow-up to Phase One: Celebrity Take Down – is a lovingly crafted piece of interactive media that possesses value beyond regular releases of its ilk. From the moment the disc has completed loading and the menu screens – of which there are many, each a different room in the semi-fictional band’s Kong Studios – it’s apparent that Slowboat To Hades’ makers haven’t skimped on sumptuousness, visually.

The videos – for ‘Rockit’, ‘Feel Good Inc’, ‘Dare’, ‘El Manana’ and ‘Dirty Harry’ – are obviously slick ‘n’ twisted affairs, but you’ve probably seen them before. That being the case, this DVD is crammed full of additional features, ranging from live appearances (generally good) to advertising promo clips (hmmm) and an assortment of speeches (not really worth your attention). Although the quality of these bonus bits and pieces quite predictably varies, their inclusion is sure to have completists jumping about the place as if their shoe soles were pogo springs.

A few hidden (albeit not very well) clips are worthy of investigation: there’s a neat mash-up of clips – some old, some never seen – that mixes the cartoon quartet with their real-life counterparts (yes, you see a lot of Damon and company, basically), and a video preview of the release’s accompanying CD-ROM reveals that the stick-it-in-your-PC second disc isn’t full of superfluous crap. It includes a variety of games – mostly simple but charming enough, and enough wallpaper (over 40 images) to cover the insides of the Tate Modern. If value for money is paramount in your purchase decision-making process, be assured that Slowboat To Hades is a ten-out-of-ten in that respect.

Of course, the music throughout is of a decent quality, and every little ‘did you see that?’ flash of a single-frame image – most particularly some grizzled and bloody-faced old hag – raises the hairs on your arms and neck. The rooms of Kong Studios are wonderfully rendered, and much satisfaction can be found from simply wandering about the decrepit building’s halls and grounds. Just watch out for whatever’s about to come out of that Hell Hole in the basement…