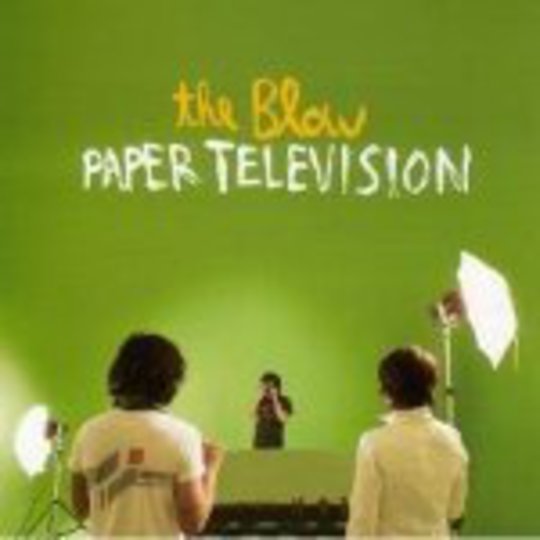 The kitchen is in the bedroom and indie is not what it once was. After the amalgamation that was electroclash, the indie kids got confused. A few years down the line we have indie glitch pop, with Khaela Maricich in her Portland bedroom, singing sensible and thoughtful lyrics over Jona Bechtolt’s mostly minimalist electronic flutterings.

From the sound of Paper Television, The Blow are obviously innovators not formula makers. Out of the ten tracks offered, a couple particularly stand out from the others in style. They’re not as catchy and endearing as tracks like ‘Pile of Gold’ or ‘Parentheses’ but they challenge the listener more. First there are the anglo-french vocals and xylophone plinkings on ‘Bonjour Jeune Fille’ that develop into a mechanically-driven stomp. Then there is the slow choppiness that is ‘Babay (Eat A Critter, Feel It’s Wrath)’ accompanied by what could be a junior school band.

As a whole the album takes you a journey into the mind of Khaela, where her crystal-clear vocals are accompanied in the best machine errortronica. Subject areas covered include: gold digging on the bumpy ride that is ‘Pile of Gold’, hugging on the snug cotton wool feel of ‘Parentheses’ that possesses the emotion-inducing line all of "the babies they can feel the world, that’s why they cry". Also there is coverage of romantic engagements such as on ‘The Long List of Girls’, ‘Pardon Me’ and ‘Fists Up’, where "love is fortress".

In fact, the general theme of this album is the sound of a lover scorned. How this relates to a Paper Television isn’t clear, but whatever the intention it is a beautifully produced collection of quirky songs that stimulate the imagination and occasionally get yer hips swingin’.