Technology Won't Save Us 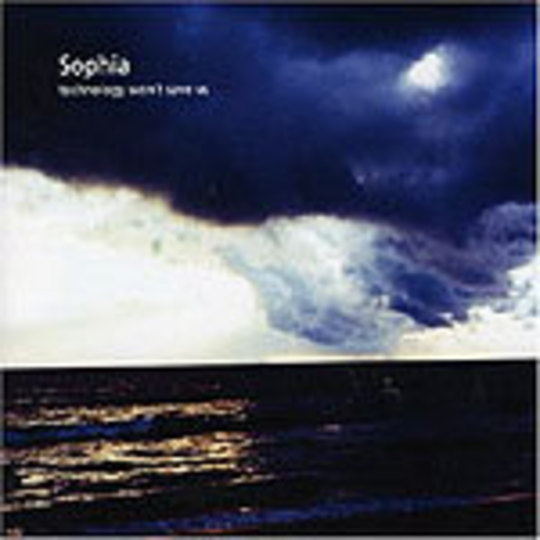 Despite his name sounding ready made for a career in stand-up comedy, Robin Proper-Shepherd has never been the jolliest of souls. While his music has undergone some massive changes between bands - from the dark shoegazing noise of God Machine, to the emo-folk he traffics in now - he has always been a dour, downbeat piece of work. He is by no means unique in this regard among alt-rock frontmen, but even fans of Sophia should brace themselves for the band's fourth studo album. Some of the material that this record contains is harrowing to the extreme - even if, as a whole, Technology Won't Save Us is a truly inconsistent affair.

The title cut, which opens the album, is one of the darkest and most disturbing pieces of music released all year - and also one of the most beautiful. Beginning with delicately picked guitar, 'Technology Won't Save Us' is quickly fleshed out with a gliding section of melancholic wind instruments. About midway, brass and strings join the fray hearalded with a rumble of kettle drums, and 'Technology Will Not Save Us' changes from folk to full-blown orchestral menace. Then harsh electronics descend like an invading alien force, leading the already threatening music to its positively ruthless conclusion.

It's a stunning piece of music. But you have to question the wisdom of placing it at the start of the album, especially when the press notes (and Proper-Shepherd's blog) seem intent on making sure that as many people as possible know what the song is about. It was inspired, apparently, by a horrific incident involving a nine-year-old boy and his father who both drowned off the coast of Cumbria. (According to reports, rescue workers heard the pair drown via mobile phone, as they searched for them along the coastline.)

Knowing the back story of 'Technology Won't Save Us' makes it an even more distressing listen - even if the title seems a little bit flippant given its dramatic heft. But in light of this, it seems really strange to follow it up with 'Pace'. The second track would be a perfect opener - it's an upbeat number with a metronomic, pounding snare and jangly guitar lines - but sequenced after the claustophobic trauma of the title track, it feels ghoulishly out of place, like a drunken party guest gatecrashing a funeral.

Things get back on track with 'Where Are You Now', one of the most exquisitely put together songs on the album. A hazy synth leads into gentle strumming, and shuffling percussion perfectly backdrops the singer's dejected sentiments; "It's 5am, I stumble down Oxford Street/the whiskey and gin - they ain't helping things." 'Big City Rot' follows, and it's a harsh, lonesome piece of work capturing the morose, self-defeating wallowing of anyone fed up of the daily grind, yet lacking the courage to leave the rat race for something better.

Unfortunately consistency is immediately lost with the fifth song, 'Twilight At The Hotel In Moscow'; it's a pleasant enough instrumental, but it leaves no lasting impression whatsoever. While 'Weightless' chisels its way into your memory with its repeated demands, and the guitar pyrotechnics of 'Theme For The May Queen No. 3' are compelling enough to warrant repeated listens, much of the rest of the album is a hit and miss affair which fails to live up to the first four songs.

In fact, the first four salvos Proper-Shepherd fires off on Technology Won't Save Us prove to be the album's greatest assets, as well as its undoing. Apart from the small niggle concerning the sequencing, they could have been the nucleus of a perfectly-formed EP - the reason why the rest the album is a bit of a slog is because it fails to live up the promise of what's gone before it.