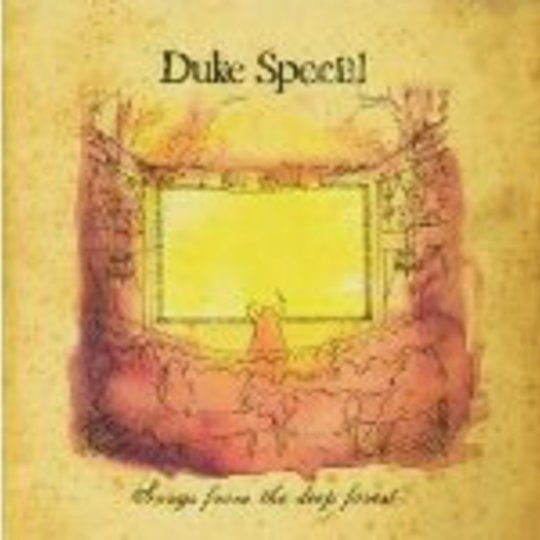 Peter Wilson: pretty ordinary name, that. Little wonder, then, that Pete decides to release records under the Duke Special moniker – a duke’s a pretty important person, generally, and for such an individual to be special, too… well, it’s quite the double-whammy of titular significance.

Rather disappointingly, the music contained on Pete’s second long-play disc, Songs From The Deep Forest, rarely reaches the level of pomp and ceremony the arrival of such a visitor, a guest within one’s stereo, should warrant; these songs are luscious of arrangement and slick of production, but explosive and immediately distracting they certainly are not. Songs… is a fairly medium-paced affair, with the good Duke lamenting and emoting with at least half a heart employed.

Largely piano-led, Songs… is quite obviously pitched at those whose heads were turned quite wonderfully by Guillemots’ Mercury-nominated debut; its moods swing a little gentler than the arrangements of the Londoners, but Belfast-based Wilson knows when and how to tweak a song so that it directs its focus from the head to the heart. Those already enamoured with this approach, a cliché though it obviously is, to songwriting will find Songs… an engaging album; those after something with sufficient substance and a semblance of genuine soul, though, are better off giving it a wide berth.

Because, you see, so lovingly executed is Songs… that to stare into its glossy shape in search of some deeper connection is to be presented with nothing but your own reflection: there’s little to no heartfelt core to this long-player, and at times it ticks over in a manner worryingly similar to Keane, or even – and I spit as I type this – The Feeling. Songs… has a Q magazine four-outta-five written all over it. That sentence alone should tell the more discerning music consumer everything they need to know about this release.