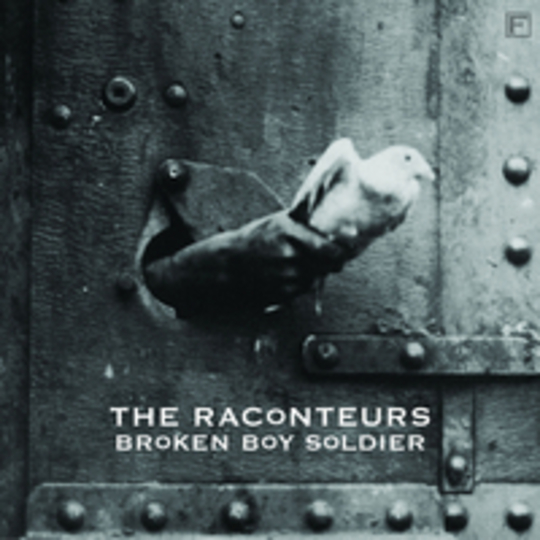 I’m trying desperately to like The Raconteurs, to cradle them to my bosom as the rightful ‘saviours of indie-rock’ or whatever the term is for People Who Are Good At Playing Guitars nowadays. I am, honest. But they come across as the sort of band that make it seem some fault of mine when struggling to find the impetus to truly love them.

On paper it should work: Jack White free of the charming yet, let’s face it, limited rhythmic vocabulary of Meg, primed to roam and wail as a hingeless six-string neo-blues demon, plus Brendan Benson and his pop sensibility articulated in full RAWK force by the... well, the other two.

Yet, as shown by new single ‘Broken Boy Soldier’, they not only fail to surpass the sum of their parts but they seem to miss the mark by quite a way. It’s a fairly decent song, no question, the lyrics showing the anxiety of the narrator about the oncoming winter of his years (“I am child and man and child again…”, the toy soldier being a symbol of his lost childhood, all that) and the looming instruments just add to the dramatic weight of the whole situation. But there seems something awkward and forced about it – perhaps it’s the sense that it should boil into a tempestuous crashing monster but doesn’t, or Jack’s mildly humorous Fagan impression, or just how the inclusion of so much extra feedback, squeaking and guitar solos just make it seem like a mess swept into a three-minute-shaped space. Whatever the reason, relative to what you expect the White-Benson partnership to create or not, the song just sits in the stereo and withers.

Cheery, Beatles-y b-side ‘Yellow Sun’ proves in a ripple of organ sounds that they can write nice tunes. In a way, that was never doubted. It’s just the conviction that they’ll need to work on, and sharpish.