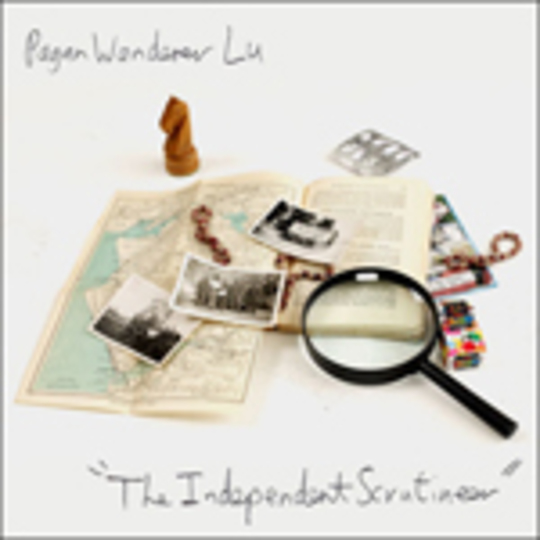 The parent of The Independent Scrutineer named it well. Concocted in the test tubes of a bedroom chemistry kit, Pagan Wanderer Lu’s latest EP is one of those kids that embodies their name and whose name comes to embody them – like a pernickety Patricia, an indolent Ivor or a dozy Doris.

For what becomes immediately clear is that for a Pagan, Lu’s views are well measured and scrutinised. Findings and thoughts are presented as arguments that are built with dialectics and then put to the audience, the listener, the jury. Yes, I see your point – hospital funding can suffer from misallocation! Empathy does feel better when it is, to some extent at least, exclusive! The concept of living a 'fun-filled' life is both ethically and practically redundant! Ethically and practically, the songs here are like a much more reserved but no less logical version of crusty NY ska punks Choking Victim. A version who, instead of squatting a tower block and shooting crack all day, might write grumpy letters to the local paper or argue about the war with strangers at the bus stop.

‘The Memorial Hall’ sets the record off; as a buzzing, Panda Pop sugar rush that cries 'dancing is really neato!' eventually emerges through a misty procession of slow drum and the drones of the war dying. Conclusion one: "If there’s a point in the fighting, any point at all, it’s so we can dance in the memorial hall."

‘Repetition 2’ and ‘Repetition 1’ bemoan regurgitated culture, and the essence of routine; the latter’s tipping of a hat to Bowie’s ‘Fashion’ answering the question, "Shall I get a new haircut, shall I change all the locks?" (PWL stayed in, wrote some songs, and by the looks of his hairline won't need to visit the barbers any time soon.)

The scuzzy garage rock rumbler reworked into a protest against cuts to local healthcare peaks between the two repetitions; 'Our New Hospital Sucks' laying out the gripes of a pissed-off civilian in the time-honoured two-and-a-half minute tradition. Conclusion three: "We'll see if anyone still thinks I'm a folk singer."

Next there is an untitled track that, for the most part, matches its EP for titular suitability, before said EP closes with a quickened revisiting of the slow drum and drone that filled 'The Memorial Hall' back at the beginning. On 'Knight -> King 4' PWL is in his pomp, backed by military drumming, guitars that shriek his melodies back to him and twinkling synths.

Synths are important to PWL. Stripped of its invasive bleeps and playdays glitches, much of The Independent Scrutineer would be standard pop singer-songwriter fare – sometimes dreamy, (‘Repetition 2’), sometimes reflective, (‘Repetition 1’). Sometimes the glitches seem out of place next to soft brass and drip-dropping xylophone, but then I suspect that Lu considered this and reached the decision that this juxtaposition of electronics and guitars captures the constant flux between tradition and ‘future’ that characterises modern life. Perhaps.

This release is wracked with the crankiness that must come intrisically to bedroom solo artists - Paul The Girl's fine album earlier this year being another good example. But it is PWL's twist on this, as well as the colourful and thoughtful music, that gives him a recognisable identity. Put plainly as possible, PWL thinks too much. But if he continues to vent those thoughts through sounds as interesting as these, let him carry on tying the knots in his own brain. Conclusion four?

“I once was an angry young man, to your door I’d nail my demands / I love you free market, but I’ve chosen darkness and the feel of a sword in my hand.”