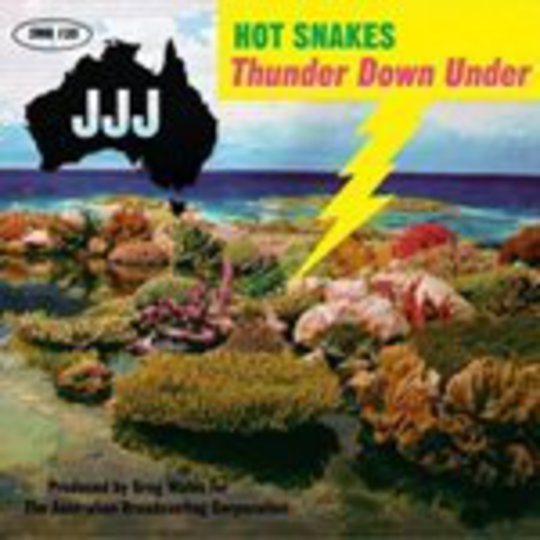 Read any 'history of punk'-style tome and chances are you'll find not one mention of Californian outfit Hot Snakes beside the cut 'n' pasted retellings of The Sex Pistols signing some deal or other outside Buckingham Palace and all that CBGB's nonsense. Yet the quintet (at the time of this recording) - formed in San Diego in 1999 - are absolutely deserving of a mention in any post-millennium updated editions, as their far-from-unique but fantastically-executed brand of melodic, yet acerbic in vocal delivery and discordant of riff, punk-rock sparked a fire under enough souls in their short existence to render any criticisms with regard to compositional limitations wholly redundant in a review situation.

The band - initially a side-project, as members (who came and went over six years) had served time in all manner of renowned acts (some still do) that require no focus-distracting mention here - split in 2005; this is, essentially, a summary release, a collection of songs taken from across their career, recorded live for Australian radio station Triple J. (That said, the band's preceding three albums were all recorded live in the studio, and the quality hardly dips here.) Thus, in some respects Thunder Down Under comprises a 'greatest hits' release, although given the nature of this particular beast that tag's certain to be analysed on a purely subjective level; what it certainly does equal is a great introduction to one of the Noughties' finest rock bands to have never broken into the mainstream. For the sake of simplicity and so as not to alienate potential purchasers, you can do away with the 'punk' prefix if it suits, simply because these thirteen songs rock, plain and, well, simply.

And that's the only slight that can be dealt Hot Snakes' way: to some, their less-than-complex arrangements left listeners cold, their instantly catchy lyrics and toe-tapping - nay, foot-stomping - riffs but an echo of punk music's past, having little to no relevance in a time when intelligence is rife within a genre once maligned for its apparent one-dimensionality. But anyone who ever witnessed Hot Snakes in the flesh knows different; anyone that ever lost a pound or twelve through sweat and gained a pulled Achilles and a black eye during forty-five minutes of non-stop punk-rock fun knows that Hot Snakes were a Very Special Band indeed. Their appeal crossed sub-genre boundaries, bringing together metalheads and pop-punkers alike in a single, writhing pit of smiles and pumped fists (skywards, primarily). This writer never once left a Hot Snakes show feeling disappointed; indeed, the only time they did disappoint me was when they scheduled their final UK show for a time when I was already booked into a remote farmhouse in the French countryside. Guys, please… you owe me.

But enough of the history lesson, as Hot Snakes' career can be summarised thusly: they were very, very good, and if you're already a fan you'll add this to your collection just to hear the very best of cuts from the band's final studio album proper, Audit In Progress, on the same piece of plastic as 'Let It Come' from 2000's Automatic Midnight debut. If you're yet to experience the band, this is an ideal sampler. Thunder Down Under's opening trio are all drawn from 2005's Audit…: 'Braintrust', 'Hi-lites' and 'Retrofit' are delivered with a greater ferocity than that apparent on the actual LP versions, and sound all the better for the increased aggression, so evident it's near palpable. This collection truly comes alive, though, when 'XOX' is wheeled out on rocket skates. A highlight of 2002's Suicide Invoice, probably Hot Snakes' most excellently consistent album, the song's the first sign of both the band's on-the-spot decision making - a voice is heard suggesting, "Let's do 'XOX' first"_, implying that the following 'Think About Carbs', another Audit… track, was originally intended to arrive at four of thirteen - and their ability to up the heaviness of a set in the blink of an eye. Every element, each facet, is supercharged; the song's core structure cracks at its edges under the force of the five-piece's delivery.

Standouts are hard to select purely because of Thunder Down Under's dual-purpose appeal: it's a release soaked in nostalgia that's certain to have fans pulling out the back catalogue; also, as aforementioned, it's a decent compilation of the band's finest workouts. But - again, based on purely subjective factors - a couple of songs bury themselves the deepest within this brain, infecting it for a good forty-eight hours or so. 'L.A.X.' is one such effort, and likewise 'Who Died'; both are culled from Suicide Invoice, and both could have a mute singing along given exposure enough. 'Plenty For All', too, is noteworthy for is mid-album slot - its sun-kissed pop sensibilities are often overlooked when it concludes _Audit In Progress. Only a mercifully short rendition of 'Rock 'n' Roll Will Never Die' really warrants any forward-skipping action.

While Thunder Down Under is far from the perfect Hot Snakes anthology - such a release would have to run to two discs, anyway (or three: just stick all the albums in the same case and call it a boxset) - it is a welcome blast from the not-so-distant past that truly shows up all but a tiny percentage of melodically-inclined punk-rockers as the heard-it-before purveyors of carbon-copied compositional misfortunes and tried-and-tired lyrical clichés that they are. No, they were never trailblazers, burning new paths to a punk-rock future our fathers couldn't even begin to dream of, but Hot Snakes were peerless masters of their chosen craft. Thunder Down Under almost faultlessly demonstrates that the band should now take their place beside the forever-cited legends in the pantheon of punk.

Even posthumously, Hot Snakes render The Pistols and their sound-alike spawn of today every bit as sincere and passionate as a Louis Walsh-bred boyband.