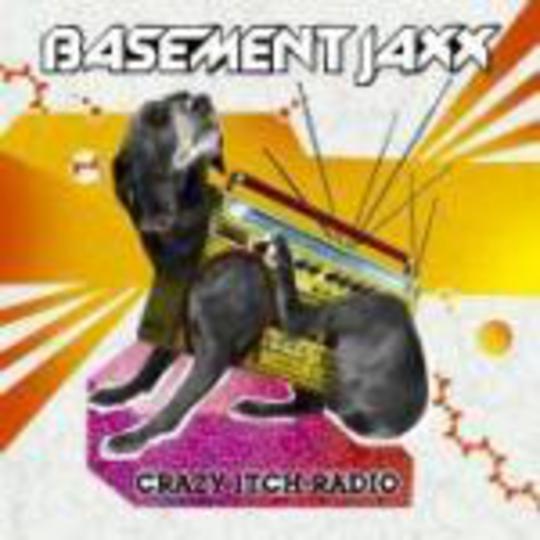 It’s been said before and replicated as the forethought of every review since the release of their second album, but **Basement Jaxx**, at _this_ very point in their career, _are_ the epitome of stagnate content. Keeping a lock on those unhelpful boundry pushing ambitions, this is fodder for the fans churned out by an extraordinarily efficient machine. _Crazy Itch Radio_ is all programmed beats, obnoxious vocals and MIDI instrumentals – frankly, it’s pure Basement Jaxx. Meaning, was what Basement Jaxx _were_ something you enjoyed and wished to continue?

The album begins with new single _‘Hush Boy’_ and it’s the typical 'Jaxx tune that is replicated throughout: two hooks that drive a steel wedge between your ears and good reasoning accompanied by moment after moment of impossibly trite composition. If it weren’t for talk of fajitas and an awful rap, its chorus could be tolerable.

And it’s that frustrating 'can’t live with it, could manage without it' feeling that denies _Crazy Itch Radio_ any kind of longevity or facet that can be adored. The ragga dancehall number _‘Run For Cover’_ will be a popular staple of live shows, with a tribal rhythm begging for the main stage at Glastonbury. But lyrics about something _“minging”_ – ironic or not – irritate far beyond the allowance of intolerability made for the 'Jaxx. And don’t even get me started on the colloquial interludes…

There’s one surprise however: a big-beat yodel in the form of _‘Take Me Back To Your House’_. Really. No doubt it’ll be the one track worshiping fans will exhibit as an example of the band’s diversity, but it nonetheless represents progression in the same manner as politicians move along: thinly-veiled, fleeting and in six words.

If you boarded the good ship 'Jaxx back in the Nineties, _Crazy Itch Radio_ won’t see you throwing yourself overboard any time soon. If you were waving it away from the shore, though, this won’t see you splashing your way through the sea to catch up. You were very much in the right, actually – is that a metaphorical iceberg I see approaching?

With Devils Amongst Us All