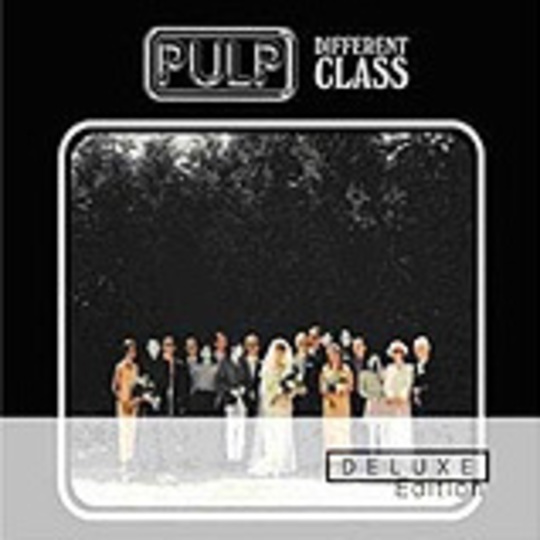 In 1996, Pulp were nominated for a gong at the MTV Europe Music awards. I forget which category it was, but what I remember vividly was a vox pop from Jarvis Cocker in which he said:_ "It just goes to show that if you hang in there and you stick to your guns, you'll make it... Either that, or people will buy your album because you've been around for such a long time and they feel sorry for you."_

As an adendum to that, he probably could've added that, sometimes, everything clicks into place for a band - the break you've been waiting for arrives and what you do with this opportunity will dictate how successful you are. Luck is one thing, but unless it's backed up by talent and solid graft it means nothing.

These are qualities Pulp had in spades, and for proof, look no further than the recently released deluxe edition of Different Class. As with the other Island deluxe reissues of His 'N Hers (review) and This Is Hardcore (review), it comes armed with a bonus disc of extras and liner notes courtesy of Cocker himself. It's easily the best album of its year of release and arguably the best album from the Britpop era.

The year was 1995, and while it turned out to be an exciting year for British music in general, for Pulp it proved to be their banner year. Jarvis Cocker became Britpop's reigning Prince Regent, even if his band were outsold by some and (along with everyone else) received fewer column inches and airtime due to that pathetic feud between Blur and Oasis (which looks more and more embarrassing for both bands with each passing year). In the months leading up to Halloween and the release of Different Class, the pump was primed when Pulp scored a #2 hit with 'Common People' – their brilliant slice of class war vitriol - and then performed a blinder at Glastonbury when The Stone Roses pulled out at the last minute. By October, they were standing on the cusp of greatness.

Really, given the mammoth hype of Britpop, and their stellar performance at Glasto', Pulp probably could've sat on their laurels and still sold albums by the truckload. His 'N Hers had brought them a fair share of national recognition, and 'Common People' was (and remains) probably the greatest pop single from that year. Instead, Pulp banged out a certifiable masterpiece that not only lived up to the sky-high expectations heaped upon it with appalling ease, but surpassed them. Ten years on from its release and Different Class sounds as fresh as it did back in 1995; it’s an album that carries a rare quality in that it could only be a product of its time, yet it remains a timeless album.

The Pulp playing on Different Class burns with the urgency of a band that knows its time has come. Musically, it sounds more organic that its predecessor and more adventurous in its arrangements. Cocker's lyrical prowess has been remarked upon at length in the reviews for the other two deluxe re-releases, but here he's completely in the zone - his scope is widened, and he locks in on his targets with lethal accuracy and rapier wit. The five singles released from this album catapulted Pulp to superstardom; the two following 'Common People' were just as angry and just as scathing - the sweepingly lush 'Sorted For E's & Wizz' (a fantastically sneering slap at the rave generation) and the album's punchy opener 'Mis-Shapes'. 'Disco 2000' (probably the album's second-most recognised song) provided some upbeat reflection, mixing shiny synths with its dirty, addictive guitar riff, nicked whole-sale from Laura Branigan of all people; the melancholic 'Something Changed', meanwhile, rounded things out on a gentle downer.

What's amazing is that there a several more songs on Different Class which could've been singles in their own right. Of Cocker's musical musings on sex, 'Pencil Skirt' is a little lightweight, but 'Underwear' is fantastic, boasting a great sing-along chorus and some stunning guitar work. The top track on this album, though, is easily the jaded, spiteful and paranoid 'I Spy'. Hovering as he was, at this stage, between the cynical social observer of teen existence in His 'N Hers and the jaded, tabloid battered, rock-star burn-out of This Is Hardcore, lyrically 'I Spy' is Cocker at his downright nastiest and misanthropic. This song may have provided a clue as to the direction Pulp were going to head in on their next album.

Different Class is the biggest-selling album that Pulp ever released, so to encourage anyone to revisit it in deluxe format, the bonus material should be as strong as possible. The songs already in circulation are top notch; highlights include the triumphant performance of 'Common People' at Glastonbury in '95; the shimmering, yet highly creepy 'PTA'; and Pulp's magnificent contribution to the Trainspotting OST, 'Mile End'. The previously unreleased material is also great - even if it doesn't reach the heights of some of the songs on This Is Hardcore's bonus disc. 'Don't Lose It' quite frankly, should've at least been a b-side, and a rough run through of 'Disco 2000', with Cocker dueting with Nick Cave, is fantastic. The only fat on the disc, really, is a less-than-average cover of 'Whiskey In The Jar'.

The deluxe edition of Different Class is worth investing in, especially if you don't already own a copy of the album. For those who caught Pulp at the height of their fame, it may prove a melancholic trip down memory lane. After all, as with many of the bands of the Britpop boom, Pulp are (as good as) no more. In the end the reissues are three fantastic discs (six, including the bonus CDs) that chart the rise of an obscure gang of veterans who became a national institution. Out of the three, Different Class is a testament to the fact that when everything clicked into place for Cocker and his crew, they seized the opportunity they'd been waiting for.

Due to their talent, determination and little bit of luck, they emerged top among their contemporaries.