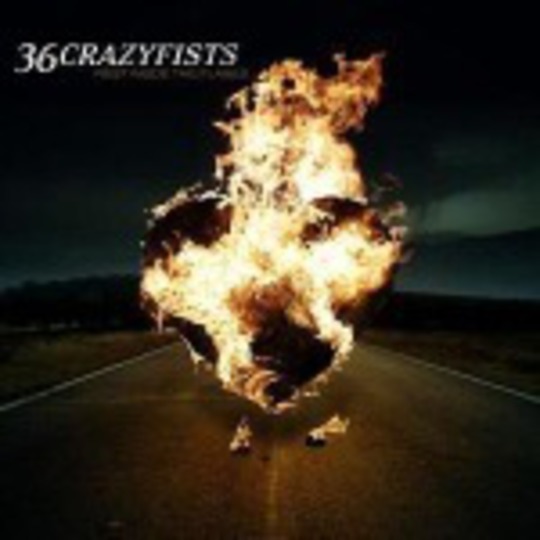 It was always going to be difficult for *36 Crazyfists *to return with a worthy offering after the success of 2004’s rock solid outing, A Snow Capped Romance. However, with _Rest Inside The Flames _the Alaskan quartet have apparently grown further in sound and stature.

The storming opening track, ‘I’ll Go Until My Heart Stops’, is classic 36CF: fast, beat-laden and aggressive with terrific melodies coursing throughout. The good news is that their screamo-metal sound has begun to sound absolutely enormous – of epic proportions – while retaining all of the intricacy and verve that they have built their name on.

This effect is rammed home on standout track, _‘Felt Through A Phone Line’ _where Brock Lindow’s wavering voice is used to outstanding effect during the slower, lilting moments, accentuating the increasing atmospheric feel of the record. Naturally, his spluttered roars punctuate every single metalcore breakdown. It just wouldn’t be 36 Crazyfists otherwise.

_‘The Great Descent’ _is probably the best indication of the band’s musical progression. Restraint is shown throughout, from the first to the last chords. Starting off at a graceful, distorted amble before erupting into several brief but beautifully structured musical disasters.

Killswitch Engage’s *Howard Jones *features on the slampit-tastically metalcore ‘Elysium’. The listing of Mr Jones on any song immediately denotes the heaviest song on the album. This is no exception. The riffs automatically appear tighter and more staccato while his trademark vocals threaten to scorch your eardrums. There is no remorse.

Melody has always been a massively important part of their game but its increased usage is a crucial factor in the brilliance of this record. While ‘Midnight Swim’ _appears to be one of the few average songs on the record, it is transformed immeasurably when played acoustically as _‘The City Ignites’, closing the album.

The sepia tint on the song sees the removal of the screamed vocals, allowing Lindow’s talent to shine through; the calm guitars lend tenderness to proceedings allowing the song to shine.

Adding this stunning selection of songs to their previous works will keep old fans more than happy and with the sheer quality of their music *36 Crazyfists *will be turning a few new heads along the way.