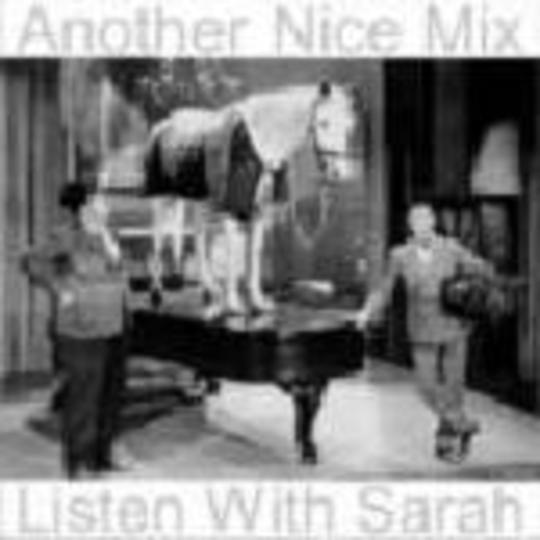 As this sample finds itself repeated mantra-like throughout the duration of three minutes calling itself ‘Another Nice Mess’, we must confess to being a bit confused too. Not because of the bizarre nature of the single itself, oh no – art is art and hence art is_, and so on – but because it seems completely unfathomable that anyone could come up with something this haphazard that seems to, well, _work. How did Sarah Nelson (AKA Listen With Sarah) know that the sound of two radio DJs fluffing up their broadcasts could not only sound sublime as well as ridiculous, but also somehow be an absolute tune to boot?

We’re never going to know of course, but at least we get the fruit of Mrs Nelson’s other-wordly sonic collages in the form of a much-delayed-but-worth-the-wait CD single. And collage it essentially is, lying somewhere between the all-out plunderphonic sample madness of Cassetteboy or People Like Us and the synapse-busting bastard pop of Richard X or Evolution Control Committee, yet retaining a sort of warmth not afforded of the aforementioned and their zany mash-ups. The samples being strewn together here, despite for the most part being from rather panicky disc jockeys trying to get their studio equipment to co-operate with them, end up forming quite a calming rhythm, helped in no small part by generous audio borrowings from Dutch minimalist guitar band Oak and ambient techno-heads Krause Duo Nr 2. Add to this the emergency tape from Marcelle’s Another Nice Mess radio show, some Laurel and Hardy and the sound of John Peel (and his assistant Hermeet Chadha, muttering only the words “oh bugger”) trying to fill airtime whilst a Hakan Lidbo session malfunctions, and you’ve got…well, a mess. But it’s a beautiful mess at that.

Okay, so it’s a bit of an overwhelming head-fuck at first, and in contrast to some of Sarah’s more energetic efforts it takes a bit longer to seep into the consciousness. But this rather extraordinary piece of artcore should be swilling around your head like all the greatest (and, happily, not-so-annoying) hooks can. Even if the hook is “We will connect to Studio 100 in Amsterdam…”

Get it here quick.

My Latest Novel at Leadmill, Sheffield, South Yorkshire, Tue 16 May