The Rose Has Teeth In The Mouth Of A Beast 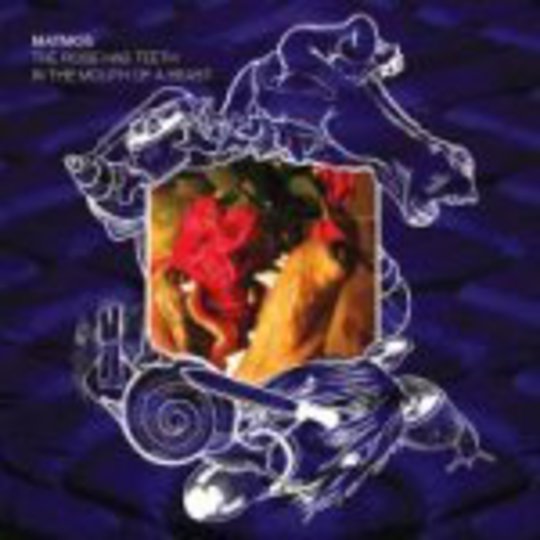 I imagine Matmos, locked away in an underground bunker, behind three sets of numerically locked doors, working intently, secretly, scientifically. Beady eyes strapped away behind shatterproof plastic goggles, bodies wrapped up in stark starch-white laboratory coats. Their secret project: the collection of sound – unusual, high fidelity, high disgust sound. Their final intention – the appropriation of aforementioned sound into functional musical style models. The sounds have been gathered from locations various; whispers of sucking and fucking from an outdoor sex maze (a covert operation); the air forced out of a cow’s uterus obtained from a farm supply catalogue; the spray and splatter of semen ejected onto a sheet of paper; the grinding of preserved wisdom teeth; the sweaty smack of cow shit shovelled onto rose beds. Cut and spliced into rhythmic material, or highlighted and displayed, any unknown noise on this record would probably be confirmed as your worst suspicion – Matmos are dealing with three genres of sound – the uncomfortable, the smutty and the sharply painful.

The real twist to the tale is that every sound in every song is there for a reason – these are vignettes, sound portraits of notable, influential or downright strange queers. Stretching the concept of a concept-album to ridiculously taut – two gay musicians orchestrate the lives of ten homosexuals. Noises aren’t used for purely puerile reasons - the sound of fucking used in 'Public Sex for Boyd McDonald' is there because of McDonald’s homoerotic fictional outdoor sex fantasies. 'Snails and Lasers for Patricia Highsmith' features the sound of a snail moving across a light-sensitive theremin because they were the lesbian author’s animal of choice. To be fully understood these songs have to be dissected and explained – the sounds do not explain themselves. 'Banquet for King Ludwig II of Bavaria' is a lumbering, obtrusively brassy, nightmare Wagner mimic. The eccentric King Ludwig, who preferred to live in a fairytale to the real world of war and crime, was a great supporter of the German composer.

Like The Civil War previously, Matmos generally maintain a damp, brooding, frightening tone. Brief moments when light creeps into their underground sound labs are few, but in their rarity become incredibly beautiful: the idyllic strings mid-way through 'Solo Buttons for Joe Meek' or the elegiac skeleton of a piano part in 'Semen Song for James Bidgood'. When jaunty ragtime piano sets in on 'Rag for William S. Burroughs' the nonchalance is killed with a rifle shot straight to the brain.

Ultimately, this is a real middle finger to pre-conceived reactions to concept albums. The genre spanning songs could only fit together as a cohesive album with some kind of umbrella concept. This is a middle finger, as not only does this work well as a concept album, it works well as an education in counterculture history, it works as a tool of disgust. It works on a physical level – 'Steam and Sequins for Larry Levan' is a fittingly dance-able ode to the legendary DJ. It works on an emotional level – 'Snails and Lasers for Patricia Highsmith' is as darkly morose as the misanthropic author herself. At the purest of all levels, this is a presentation of sound in detail, which, to listen to carefully reveals surprise after surprise.