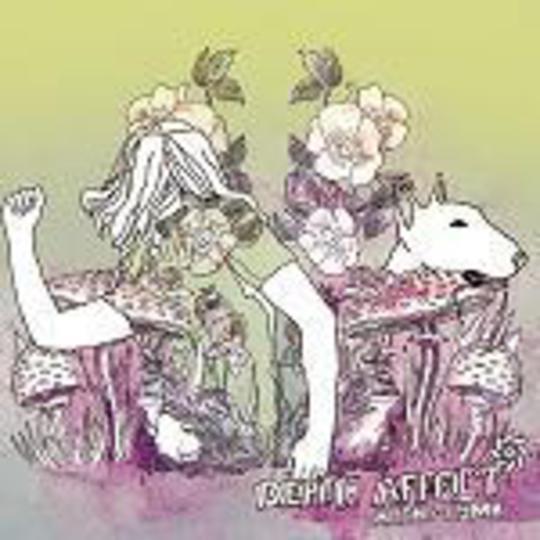 Welcome to the modern world, all you sucker MCs. As bands go, dance-orientated or not, it seems reasonably rare for a group to have a DJ and a VJ comprising precisely half of their musical ranks. But then again, considering the sort of colourfully bug-eyed sounds that European newcomers Depth Affect seem to create, they evidently aren’t like other bands. From the first few listens of Arche-Lymb, their debut full-length slab of plastic to grace the ears of so many, the quartet come across as fearsomely intent on conquering this century quicker, slicker and more effortlessly than anyone else. Whilst they’re ultimately not going to achieve anything of the sort (you’d probably need something a bit more – how do you say? – immediate, I guess), the listener benefits from getting to hear them bring the sort of bold but blissed-out psych-hop experiments that could have them hailed as jolting some freshness back into the French alt.music scene. It probably won’t happen, of course. But by this evidence, it should.

And let’s see that evidence, shall we? Opener ‘Honey Folky’ is enough to get any dance-head excited, whatever their genre-orientation, melting down as it does heavy-handed hip-hop beats, sprightly Four Tet-esque electronic beeps and blips, gentle acoustic guitars and what sounds like the voice of A Famous R’n’B Chanteuse cut up into incomprehensible outbursts. It’s wondrous, and it’s only the opening gateway to an ear-pleasing, sprawling tune universe. ‘One Day Or So’ quickly follows, layering and splicing the spitting talents of CYNE over a ground of finely-distorted electro harmonics – like the jumble sale version of M83, say, remixed by DJ Shadow when he’s in a fairly jolly sort of mood. There’s an abundance of rich atmospherics too – ‘Blinzen Blume’ being a fine example, not unlike the sort of effect you’d get if you scratched your mellowest Boards Of Canada CD to buggery and delighted as the laser eye of your stereo scrambled the data into a zonked-out, ambient mess.

In a sense, there is a feeling that the album doesn’t develop or venture very far the longer it goes on; although not exactly repetitive, per se, they make the mixture of electronica, hip-hop, post-glitch, folk and the kitchen sink seem so easy that the listener would be forgiven for becoming a bit blasé to it all too soon. But perseverance here undoubtedly reaps reward, partly because the intricacies in the songs seem to unravel themselves so gracefully, and partly because the album seems to gain momentum in its second half. ‘OD-MF-Side’ ups the phatness of the beat, piling everything on thicker than before, and rapper Alias makes ‘Wyoming Highway’ twitch in a way that the lush synths by themselves could not achieve. ‘Dani Guimauve’ stutters and flickers in almost an Aphex sort of way, too, whilst ‘Vegetable Valley’ seems to have the climactic thing down pat, despite not exactly reaching post-rock levels of noise.

Overall then, a triumph of sorts. Granted, it’s not going to change the world, but I’m not sure it wants to anyway. You’d be a fool to be expecting that much but, at the same time, you’d be a fool to miss out. Check.