We Are the Problem 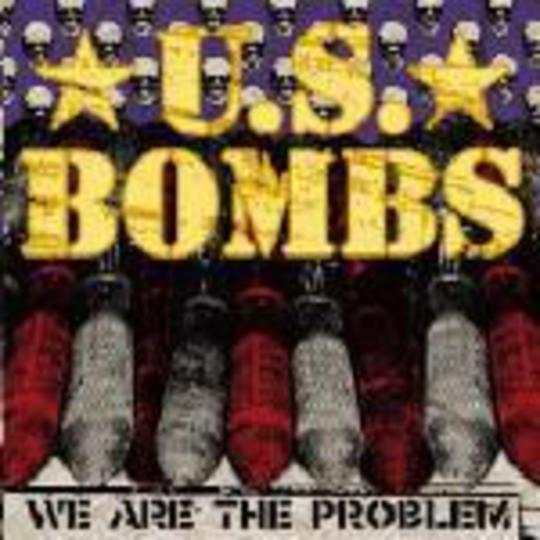 There are two types of music that defy considered criticism. Firstly, there are those artists who make music that blitzes your senses and bends your world so acutely that there does not yet exist the reference points or language, even, to accurately describe and appraise it. At the other end of the scale are bands you loved when you were 15. It is incredibly rare that these two types should exist in the same band, and anyone that hasn’t heard the U.S. Bombs by the time they are 20, (at the very latest), should probably surrender any interest in them now.

It is hard to shake off the memories I have of the U.S. Bombs, and frontman Duane Peters in particular. The soundtrack to innumerate summer barbecues and parties, I remember the first time I saw Durty Duane ‘live’ – rolling around on my TV screen covered in filth and shit like a big drunk baby. My mum came into the room, shook her head disapprovingly and tutted “Well he’s on drugs!” I know this mum. This much is obvious. So you see, to some extent, it doesn’t matter to me that tracks 1, 6 and 7, (the title track, ‘4th Of July’ and ‘Destroy the Nation’), all sound exactly the same. I never expected or demanded artistic progression from the U.S. Bombs. Christ, I never even demanded art. I didn’t know what art was at this point.

“Do you know who built…the statue…on the Hudson?” I’d largely stopped listening to the Bombs by the time I arrived at university, but there is still one incident from my first year that triggers memories of them. After this question the burly, silver-haired New Yoiker, with his fading Yankees cap and leather aviator jacket, stares me dead in the eyes, demanding an answer. “Uh…the French?” He gives me a look that gets lost somewhere between rage and bemusement; flaring out his hairy nostrils, polarising his eyebrows to the North East and South West of his grizzly forehead and tilting his head back like a washed-up Mussolini. Wait a minute…the French did build the statue of liberty! What are you thinking, old man? What devil was it that blew the pink brains to the inside walls of your skull and now struts like a drunk docker in the space that’s left? J.D. Wetherspoon should be knighted, or at least given some kind of government grant. The money Mr. Spoon’s must save them on providing day care for the mentally unhinged should be enough to buy him a peerage in any case.

‘We Are The Problem’ isn’t as good as ‘Garibaldi Guard!’ or ‘War Birth’ or even last album ‘Covert Action’, but if the usual mix of backs-to-the-wall street punk and gurning-Elvis, hip-shaking rockabilly is enough to keep Duane and Kerry in beer and drugs then I can fully understand its release and hope it sells by the bucket load. Unfortunately for Duane’s new born son ‘Clash’ Peters, though, it won’t. After pummelling through the typically vague political finger-pointing, (it’s all ‘They’ and ‘Them’ with the Bombs – first line, “Don’t believe them anything they say”), saloon-gang choruses and twiddly lead guitar lines, the whole glorious mess is all over in about half an hour. Just like this review.

You're All I Have