What The Toll Tells 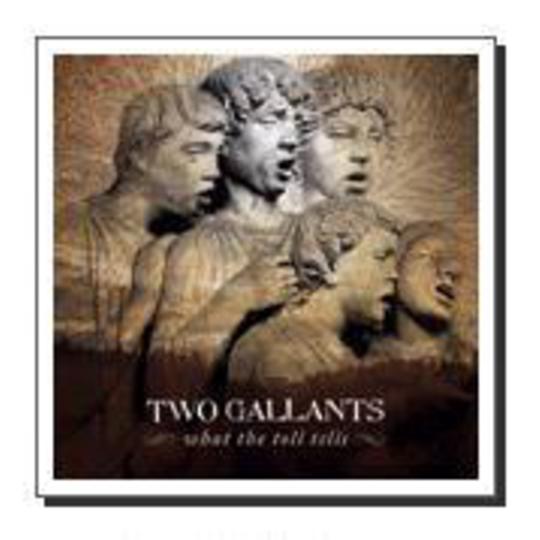 “And some sad singers, they just play tragic...”

I probably just committed a hundred cardinal sins in the Church of Indie by quoting Bright Eyes at the start of a review – not least a review of a record released through the Conor Oberst-affiliated Saddle Creek label. He makes a fair point though; in such comfortable times as these, it’s easy to pass off lyrics telling of a tortured past and present as folly, some manufactured anguish to be recreated live with a few stage tears and a lot of play-acting. But while heartache and money troubles continue to ail those of us who haven’t had their emotions sanitized away by reality TV and political correctness, there will always be bands we can believe in.

Whether they’ve taken too much meat from the Bright Eyes plate of ideas is irrelevant; Two Gallants serve up a platter of enriching and nourishing songs with a huge variety of subjects. An intro straight out of a Wild Western movie gets interrupted by a yarn similar to the kind of magical scenes The Decemberists conjure up. Adam Stephens puts himself in the mindset of a variety of beguiling characters for his inspiration: a wife-murderer in 'Steady Rollin'', a hard-working negro slave in 'Long Summer Day' and a Latin-speaking preacher to the masses in the distorted folk-along of '16th St. Dozens' amongst others.

The brittle guitar sound is kept together by some masterful strokes behind the kit as the gallant two’s limitations are worked to their advantage. Hearty backing vocals, layered strings and harmonica solos fill out their sound in a way Jack White can only wish his Fender Tweed Deluxe would do for him.

The rambling song structures can be a bit too much to digest in one take; almost half of the songs here last for more than eight minutes a piece. Like he says: “The last thing that we need is closure,” and when a song doesn’t have to end, it gets free reign. For this we can be thankful, for in What The Toll Tells we’ve been served up an In The Aeroplane Over The Sea for ’06 – an album full of misty-eyed dreams and incredible characters.