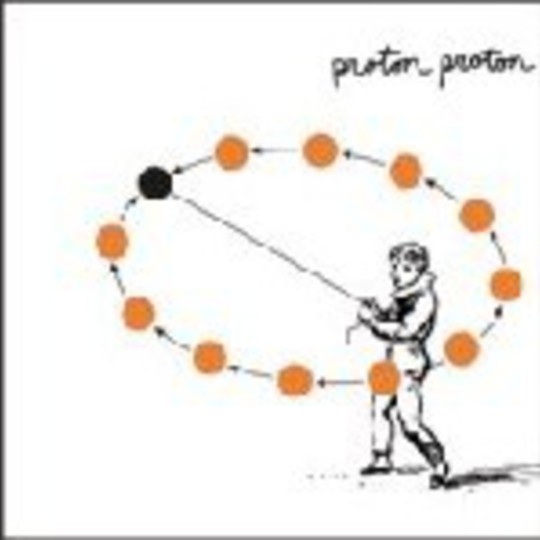 The on/off guitar thrusts on this EP's first track, 'Plates', are crankier than Albini, and harder than Chuck Norris. Be assured: fists WILL fly in all directions. Old ladies will be knocked out of their trajectories, and Earth may stagger out of orbit. Proton Proton, we suspect, will get away with it scot-free. The cunts.

Brooklyn's Proton Proton have been concocting this succinct, sparkling sound for less than a year, and already they've dispensed with the peripheral. Like disparate forebears Can and Fugazi, they have a sparse, selective sense of sound, showcasing awkward rhythms and vocal stabs in isolation. There's no sonic mush for their quirks to disappear into, and even where their idiosyncrasies pile on top of each other, they're splayed in such a way that every limb is identifiable.

Blame the mercenary lineup for such filler-free fare; rather, even, than hire a separate bassist, their guitarist mashed the two sounds into one custom axe, and hauls out licks that are as comic as they are compulsive. 'Two Words' consists almost entirely of a repeated guitar/drum phrase that slows down...and speeds up...and slows down...and speeds up... As Shellac pisstakes go, it's funny as fuck.

Their peculiar rhythmicality and singular melodic twists are tempered with muscular refrains, held aloft by a set of vocals that echo the shrill mania of Chris Cornell and John Garcia. Indeed, the list of possible influences is lengthy - here, they sound like TV On The Radio, there Les Savy Fav. Crucially, though, they sound fresh and streamlined, more the product of their ideas than their heroes - and this is only their second EP. Expect wonderful things over the coming year.