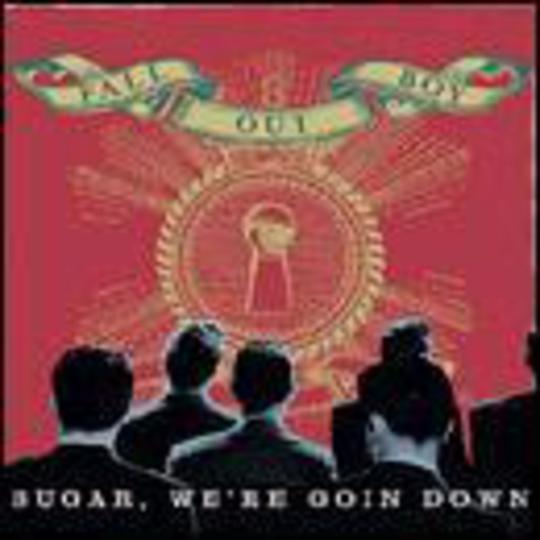 Flickin’ late-night television channels, one to another, no direction, not bothered. Laverne – smug, annoyingly so, but you still would after eight chasers and a packet of beef McCoys – smiles as falsely as she possibly can and introduces a video. I’ve heard the band name before – Fall Out Boy - and am fully aware that their single, much touted as The Big Break, ‘Sugar, We’re Going Down’, is somewhere in my pile of CDs that I might get around to playing sometime before May. But nothing, nothing, could have ever prepared me for what appeared on my television all of four seconds and an eye blink later.

If Fall Out Boy are the state of rock, or rather the pinnacle of rock, commercially speaking, in the year of our Lord 2006, then Kid Rock is the greatest rapper to have ever walked the Earth, his reach to touch the face of God Himself weighed down only by his own enormous ego and a midget’s corpse.

‘Sugar, We’re Going Down’ is unprecedented in its banality – never, ever has a band mixing pop and punk done it with such a disregard for either genre. It’s candy coated, pumped full of E numbers and quite probably will give you ear and throat cancer if you so much as play five seconds of its pointless duration. Kids can be forgiven – sometimes the young know not what they do, let alone why they do it (it's this magic thing called 'marketing', get used to it) – but should an adult, a man or woman of post-puberty age, be seen purchasing this from their local HMV, then someone should assume the role of public executioner and do said sorry individual a fucking favour, before they subject family or friends to this atrocity. Perhaps, unbeknownst to the best of us, this release is simply a Battle Royale-style experiment – those that buy it with a credit card will discover that it explodes in their hands upon hitting the street. I hope and pray to the God of Rock Him or Herself - we've each got our own, so pray to yours - to see pedestrianised city centres stained red this weekend.

Protestors will claim that its catchy, and they might have a point – the chorus to this hangs about your head like a bad stink follows an eight-pints-and-a-dodgy-doner dump – but so are STDs, and no one wants one of those down their trousers. Fall Out Boy are a boil on the end of rock's sock-clothed cock, a puss-filled annoyance that’s better off popped and wiped clean. Kill it, end it, get on with ROCKING. They are an infestation that must be treated, an infection that requires an immediate antidote; Fall Out Boy should be strapped to a barber's chair and force-fed AC/DC records until their teeth are black and their hair's lost its fashionable floppiness. Shit, that said they’re not even pretty enough for the pre-teen crowd to wet their My Little Pony panties over, so what the fuck is the point of them?

Please, for the love of rock and roll music, all 50-odd years of it, do not buy into this sub-The Noise Next Door crap. You’ll feel better for it, really. Don't misunderstand this review as bashing for the sake of it, either: words need to be written, to be spoken, to be screamed. This is not rock music, nor is it pop music. It's shit music. As for Laverne, she knows what she’s done – another body against the wall when the time comes, believe.