This Ain't A Hate Thing, It's A Love Thing 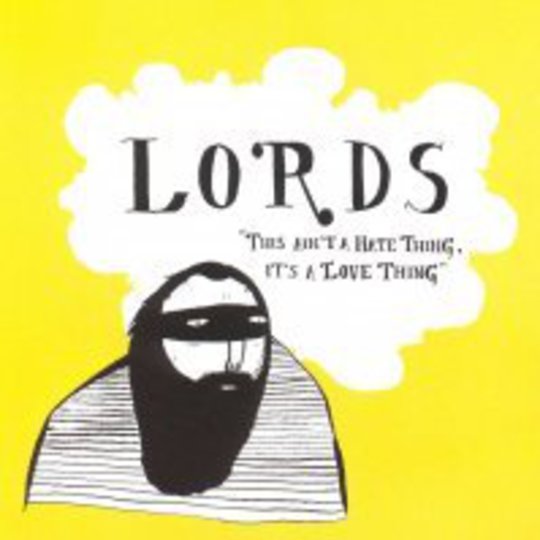 Sometimes where you're coming from and where you're at are like two totally foreign entities. Add where you actually want to be to the equation and you've a mathematical conundrum even Pythagoras might think twice about getting involved with.

This could easily be applied to Nottingham based trio Lords, whose heavy riff-laden mantras could have been conceived in Birmingham, England sometime round the turn of the eighth decade of the twentieth century, and then honed to perfection in the regions of Birmingham, Alabama over the ensuing few years. Oh, and then of course came punk rock. Damn! Time for a rethink methinks...

Lords, for all their dirty, grinding grime-stained passion and carbohydrates-starved soul are like the ultimate concept project, yet without any actual reasoning or hookline to commit themselves to. Sure, they have the blues every now and then ('The Unfortunate Death Of The Lords' could quite easily be renamed 'What's The Point Of The White Stripes?' but hey, we're not meant to be cynical here, right?). When they've finished messing with your mind they want to take control of your feet. What else can you say about an outfit that inflicts three minutes of hellfire and fury called 'I Want To See You Drunk And Dancing Like A Russian', like a less speed'n'spunk driven Motorhead, on its unsuspecting brethren? They even give the impression that luuurrrve may be in the air - 'Ethan' is a truly remarkable piece of jazz-fused noise that breaks down halfway before refuelling for an almighty crescendo that in layman's terms can only mean... well, ask your lady if you dare.

But enough of wondering just what possessed the three Lords themselves - bassless visionaries to a man - to revel in such unlikely deification. Instead, just enjoy This Ain't A Hate Thing, It's A Love Thing for what it is - a gloriously misconceived and overtly dangerous record.