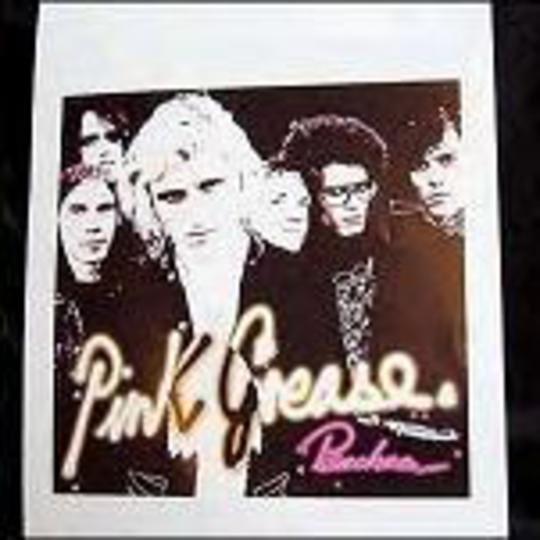 Inevitably, as it is a Pink Grease song, 'Peaches' is a mighty slab of technicolour rock’n’roll filth. Taken from current album This Is For Real, it kicks off with a loose, sauntering drum beat before developing into a confident swagger of a tune, dripping with the trademark Pink Grease sleaze and a typically overblown vocal line with a liberal smattering of “uh-huh, oh yeah”s. Plus, of course, the custom-made Pink Grease synthesiser piercing through the low down dirty gutter rock in a display of howling clarity which is completely incongruous. Even if it does sound absolutely mighty, it’s still Bad And Wrong and shouldn’t be allowed. But then, that sentence pretty much applies to everything about Pink Grease. They’re a silly, silly band, they often make very little sense, and their music is essentially an elongated and surreal come-on which is to sex what spam subject lines are to pornography. However, the inescapable fact of the matter is that they write mighty, mighty tunes which make you want to dance until your knees explode. So leave sleaze-based objections to the Pope and check Pink Grease out on their upcoming, single-whoring tour.

It’s also worth noting that the first b-side to this is a remix by S&M electro mistress Peaches, and is absolute genius. Note to self: get hold of some Peaches stuff on record Right Now, if not sooner. Even the second b-side remix, dubbed a 'Riton Re-Rub', is rather less pointless than I’ve come to expect from such b-side filler cop-outs and actually makes for rather pleasing listening. However, it’s still not as impressive as writing your own bloody b-sides. Lazy gits.

...And You Will Know Us By The Trail Of Dead at The Rescue Rooms, Nottingham, Nottinghamshire, Fri 1