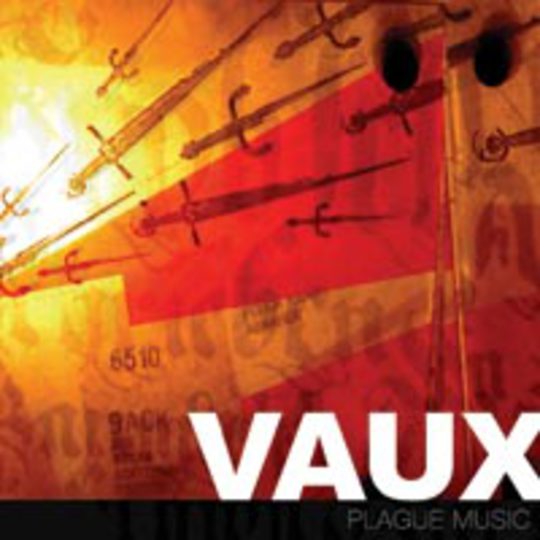 All hail the Second Chance. Without it, Vaux wouldn’t be getting this review at all.

Picture the scene: I’m at my sink, last night, washing up dishes from two days ago. Scrubbing furiously, the noise coming from the living room is nothing but an irritation. It sounds like Funeral For A Friend or Thursday. I want it to stop. 16 minutes later, it has. I sigh with relief at the blessed silence, and continue to pulverise fossilised curry sauce with wild abandonment.

Fast forward to this morning. I’m late for work, and need CDs for the tube ride in (it takes an hour, door-to-door, but I chose to live in the sticks, so I deal with it). Without really paying too much attention, I simply grab whatever’s on top of one of numerous ‘review’ piles (i.e. the stuff that’ll NEVER get reviewed ‘cause it’s crap; all the good stuff stays in my bag until such a time as I can write something up). Top of the pile is last night’s ‘Plague Music’. I’m drawn to the fancy cover that I didn’t notice 12 hours ago, and decide to give it another go, the sacred Second Chance.

Boy, would I have ever been a dick to neglect this permanently.

‘Plague Music’ is ace. It contains five tracks of see-sawing post hardcore that, whilst not created by individuals thinking too far outside ‘the box’, knocks the stuffing out of just about everything else I’ve been subjected to courtesy of Radio 1’s rock show and Xfm over the last… ooooh… seven years. Or something. It’s good, no, it’s damn good. Quentin Smith has the least r’n’r name in the history of amplification, but has the voice of a acid-gargling angel and the words of a million tortured poets. By tortured I mean they’re actually getting lashed, or strung up on a rack, rather than ‘oh, I’m so emotionally unstable blah blah blah’. ‘RAID!’ sits pretty as the standout of the conventional sing/scream offerings, blessed with the astute line, “This sound is so contagious”, but it’s ‘Sex Will Happen Tonight’ that’ll prick ears like nothing else. Coming on like Marilyn Manson *covering *Terrance Trent D’Arby’s ‘Sign Your Name’, it’s smuttier than that Dirrty bird herself doing press ups butt naked in a muddy field full of horny marines. Only, with a guy singing it. Truth be told, it makes me feel a little strange…

So, kids, embrace the Second Chance. Without it, you’ll never really know anything.