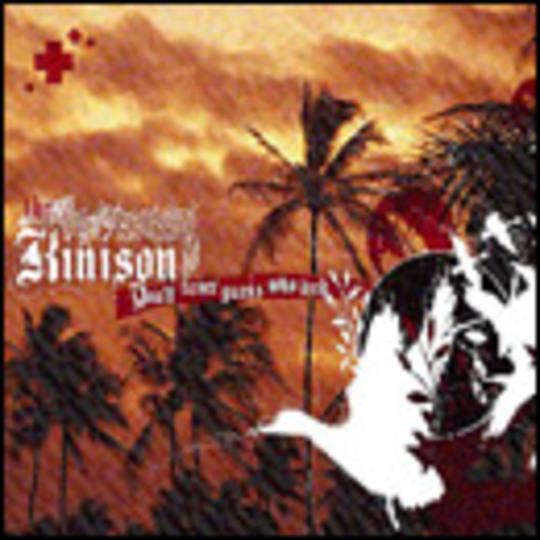 This DiS writer must confess that he’d never previously heard of The Kinison before. What he had heard were countless Yankee boybands trying to vomit out their lungs to a soundtrack of guitars so discordant and rhythms so angular that they would give Ian Mackaye himself a Hiroshima of a migraine. The anti-fairy story became the standard; pure dissonance recreated so often it became pure Disney, conventional and contrived.

Thankfully, The Kinison are different. Whilst many bands in the ‘emo’ movement, (that’s ‘emo’ as in ‘emotional’ rock…as opposed to the emotionless music that people have been making since people weren’t people), claim the straight edge movement, these boys openly claim the “hide the knives Dave, the stains were hard enough to get out last time” movement; “Maybe we could sleep it off with your best friend's pills/grind our teeth to your best friends coke.” Now, many a time I have stood at the edge of the stage at local battle of the band nights, school ‘talent’ shows and Festival sets by Keane, thinking, “What if...what if someone just gave these boys some drugs?” CAN YOU IMAGINE IT?! Tim Rice-Oxley macked off his spazznut, pumping the ebony and ivory so frantically that he makes Jerry Lee Lewis look like Uncle Albert on a comedown…pyrotechnics are for sell-outs, this boys on fire! My point is, The Kinison inject some much needed fun into their genre; the chiming rhythms of the A-side coming on like a more angsty, (the lyrics remain dark), Franz Ferdinand if Omar and Cedric from At The Drive-In annexed Alex Kapranos and Nicolas McCarthy for a night. There are also hints of Floridian folk-punks Against Me! in both front man Chris Lewis**’ delivery and lyrics, which altogether makes for a potent concoction.

If there was such a thing as an emo party, then The Kinison are kids coming up for the first time in the corner. Someones just spiked their snakebite and black with discobiscuits, and suddenly they’re on a slightly different wavelength to everyone else.

You Knows I Loves You