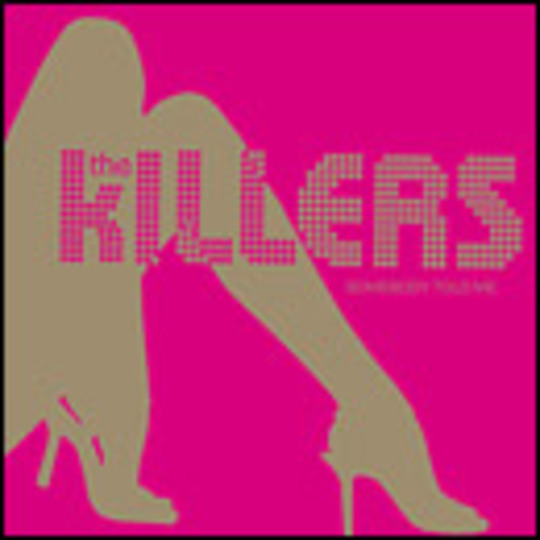 Hailing from a city of sky-scraping facade, Las Vegas' The Killers are a mighty fine example of style over substance. Theirs is a game of bluff - charging at you with a zealot's confidence in the hope you won't notice that beyond the bluster they're all hype and no trousers.

But in the pop world, just as it is along that palm-fringed strip, style and attitude alone can take you a long way, baby.

And The Killers' second single, 'Somebody Told Me', is a point in fact. A glittery fusion of Nick Rhodes synth, bolshie vocal, and studio sheen, it's their very self-assurance - strutting like 'Master and Servant' period Depeche Mode - that's so contagious.

The pulsating rhythm section - pounding along with a son-of-a-bitch tempo - is as tight and unforgiving as my foreskin was before I had the procedure popular with men of Jewish faith. That the lyrics are utterly banal barely registers, the song is so intense, so goddamn relentless that it never becomes an issue.

In their stride, these cocksure lads have got one helluva swagger about them. They're so cool they probably don't even break sweat in Nevada's hairdryer heat.

Admirably distinct from a lot of West Coast nonchalance, it's the lead in their pencil, not any real evidence of talent, that makes you sit up and take note. They're The Dandy Warhols with a red hot poker up the ass.

You could argue that all that pizzazz is a little too polished, inorganic (I can't be the only one getting a whiff of Republica here) but giving the bird to the lo-fi brigade is not wholly without merit.

Deep down, we know that The Killers aren't the real deal, just as we're well aware that Vegas is chocker with mulleted white-trash fatties necking paint-stripping cocktails from lurid-coloured beakers; but that doesn't mean that we don't want to lose ourselves in some of that neon glory.