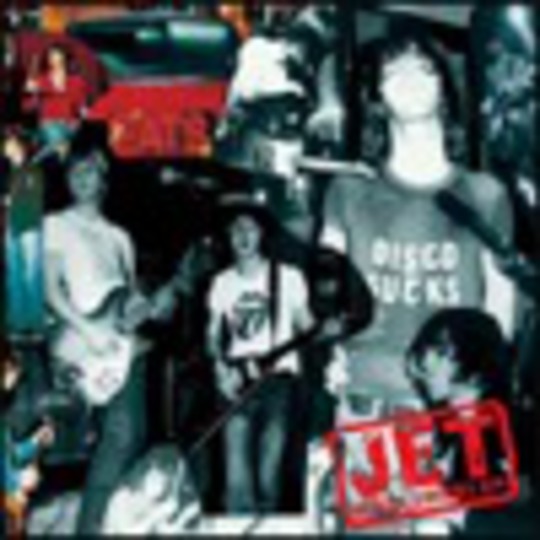 Apparently Keith Richards personally chose Jet to support The Stones on the Australian leg of their current tour. Perhaps this is because the Australian four piece’s first EP is born out of the same Jagger and Richard’s infected twangs and rhythms that make up the best of ‘Sticky Fingers’ and ‘Exile on Main Street’. Or maybe it was because ‘Jet’ is easier to pronounce after a vat of vodka and orange, than, say, Fischerspooner. However, they did support The Rolling Stones. Not bad for a band who, before a certain weekly British publication began hyping them till their pens dribbled, were probably playing to a small tree of Koala bears.

So we get the ‘Dirty Sweet EP’. Originally released on a limited edition vinyl earlier this year, and now available on E-bay for an ever-increasing price; its four tracks have now been re-issued for the masses. Thrashing opener ‘Take it or leave it’ sprints along like a Datsuns song wrapped in…another Datsuns song, with its accelerated guitar workout overtaking the screeched, slightly uncomfortable, lead vocal. Surely this can’t be another descent into an unvaried string of throwback head bangers? With the opening of ‘Cold Hard Bitch’, this downward spiral seems almost inevitable – that is until the tune begins to build into a catchy, no-holds-barred AC/DC stomp. The currently fashionable guitar kick is present throughout, but Jet manage to display a firm hold of tight-fitting melody, as well as hard, serating riff-ege. This well-crafted ‘Back in Black’-esque tune, is supported by a riff straight out of the Angus Young school of head banging: ‘Cold hard bitch, just a kiss on the lips, and I was on my knees’ – you get the picture.

Straight out of the swaggering ‘Cold Hard Bitch’ comes ‘You Can’t Always Get What You Want’…sorry, that should read ‘Move On’. A Stones-infected acoustic jam, that trawls its way through a delicately twanged verse, and harmony-driven chorus. All that’s missing is the opening choir. Is this to become Jet’s very own ‘Wild Horses’, or will it fall short, and end up sitting somewhere near Kelly Jones’s past acoustic efforts? The band's influences are staring you in the face throughout every minute of these four varied, well-oiled tracks – thankfully, they pick some of the best. With The Kinks, The Stooges, Bowie, and not forgetting The Rolling Stones themselves, Jet craft sleazy, cut-glass rock n’ roll out of all of these stalwarts from the last forty years. It is no surprise that the packed Jagger/Richards’ songbook provides the source for the final track, ‘Rollover DJ’. This rant against disco and its purveyors, grooves with shouts and licks, seemingly lifted straight from Keef’s own withered hands. As with the rest of the antipodean guitar group assault, it’s worth asking whether they are successfully paying homage to their musical heroes, or producing a set of bland re-hashes of past classics? Whatever your opinion, these guys can knock out tunes that will make your toes tap, even if they don’t make your hips swing.

‘Dirty Sweet’ might not jump out and grab you; it might not make you sweat, but if you own a Stones record, and an AC/DC album, then it will do you no harm to slot this EP in between the two. There is enough musicianship, melody and spirit on this record to make you want to hear more.