Not Gonna Get Us 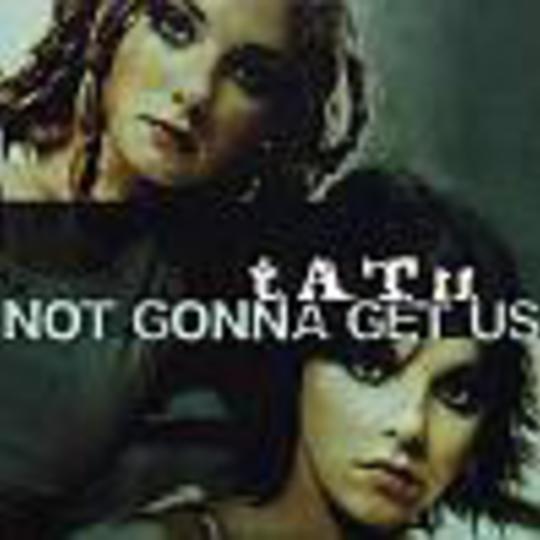 There’s a strange moment about two-thirds of the way through the video for ‘Not Gonna Get Us’. At the point when the song’s seventeen-stone super-heavyweight backbeat gives way to a solitary featherlight keyboard, the images of a t.A.T.u.-driven juggernaut pelting it full-kilter through Siberia are replaced on screen by family photos of Lena Katina and Julia Volkova.

It’s odd to be made privy to these pictures, to be included in what should certainly be the band’s private world. But then, t.A.T.u. are a total project, required to play a role at all times – to still be pop stars and ‘are-they-or-aren’t-they?’ lovers off-stage and off-mic. Why else would it reputedly be a contractual requirement, rather than a matter of choice, that they always sleep in the same bed on tour?

So, t.A.T.u. come with the implicit message that identity exists in the way we act, nothing more. And by acting like pop stars and acting out the routines of love – kissing not least amongst them – t.A.T.u. have become pop stars and, ostensibly at least, have become lovers. Nice one. It’s an exhilarating and shamelessly liberating fantasy of self-creation. If only my deciding to swank around like a rock and roll icon would have the same effect for me.

And ‘Not Gonna Get Us’, for what it’s worth as part of this project, is absolutely great. No point in framing yourself as pop stars if you can’t frame yourself as decent pop stars. A fantasy of total freedom, delivered with total assurance and yet underscored with bleary-eyed escapees' ennui. It's another behemoth of a record, as loud and as unstoppable as the runaway jugganaut in the video. These are emotions in the full 17:9 aspect ratio sense of the term, as far from meek and unassuming as its possible to conceive. Pure cinema – an act on one level or another – but enough to leave you blinking, disorientated and disillusioned on your re-emergence into the real world. Stellar.

Welcome To The Monkey House